Seriously, hydrogen is not for heating homes & businesses 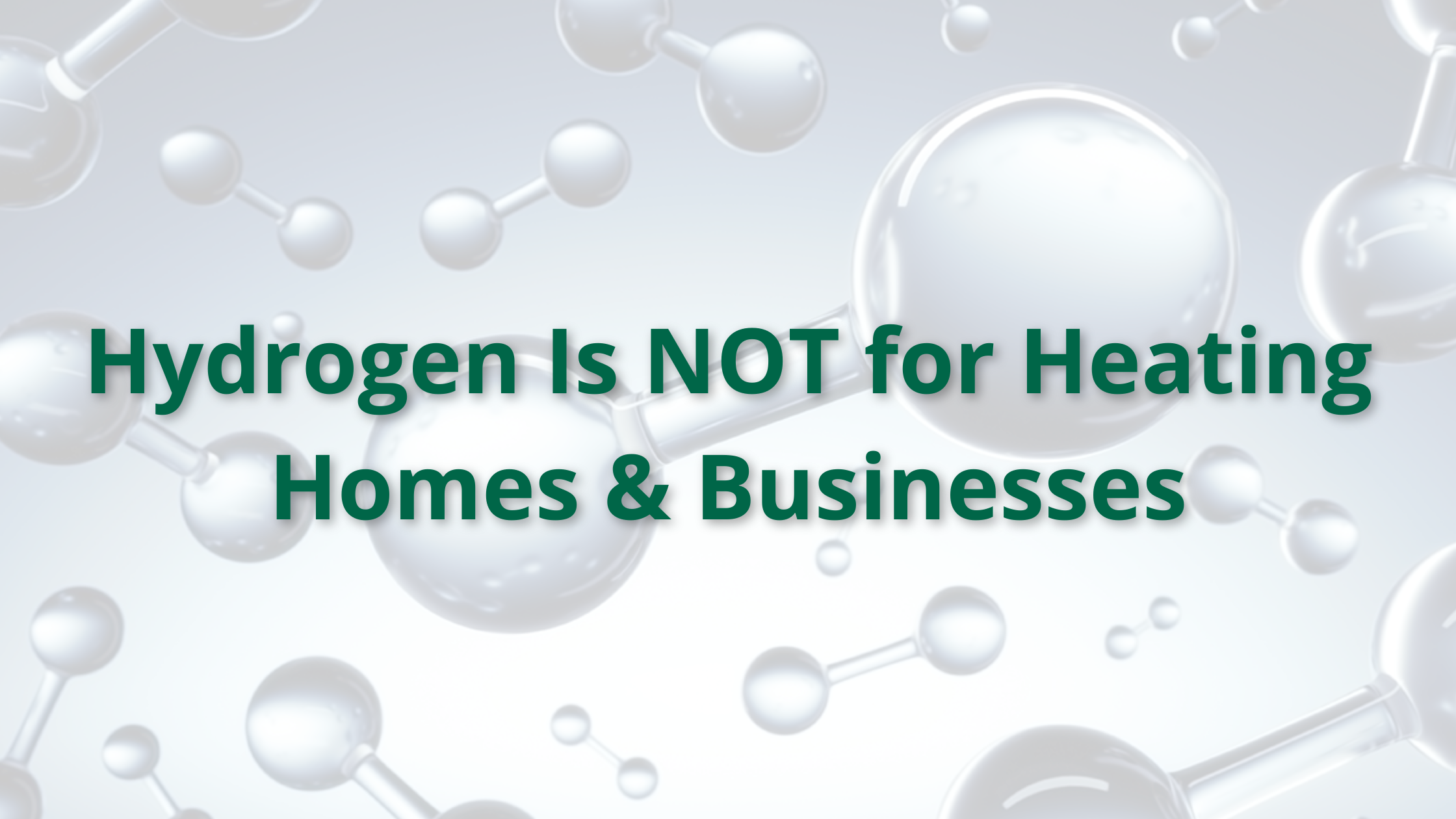 A few weeks ago, we wrote a blog explaining why renewable natural gas (RNG) and hydrogen should not be mixed in with natural gas (methane) and sent through pipes to heat buildings. That blog focused on RNG – how there’s not enough to go around, that we don’t really know how much it will cost, and that getting to net-zero carbon emissions means phasing out combustion in all its forms. This blog will focus on the other fuel some stakeholders are pushing: hydrogen.

First: What Is Hydrogen Fuel?

If you think back to high school chemistry class, you might remember it as the first element on the periodic table. When we talk about “hydrogen fuel” (H2) though, we’re not talking about a gas that we can simply collect from the atmosphere; we’re talking about a fuel that has to be produced by splitting two hydrogen atoms off another compound. Most often, this means using a lot of energy to split H2 out of water (H2O) or methane (CH4). When consumed in a fuel cell, hydrogen produces energy without producing gaseous emissions – the only byproduct is water. Hydrogen, therefore, gets a lot of attention as a potentially “clean” fuel.

However, you need a LOT of energy to produce hydrogen fuel (you’re splitting apart chemical compounds that are bound together!), and right now, that energy overwhelmingly comes from the combustion of fossil fuels. You can produce hydrogen fuel with electricity from renewable energy sources, but the process is inefficient – for example, you lose more energy converting sunlight to electricity to hydrogen than you would if you just stopped at electricity and used or stored it (perhaps in an electric vehicle).

Gas utilities around the country, in the United Kingdom, and elsewhere are claiming that mixing “green” hydrogen made from wind and solar into the pipelines is better than relying solely on natural gas (fracked methane, CH4). They have read the writing on the wall and know that governments are getting serious about reducing greenhouse gases. As companies in the business of maintaining a network of distribution pipelines, they’re naturally going to look for an alternative fuel that they can distribute through those pipes. As stated in a previous blog, to the utilities, RNG is the stepping stone (read: the gateway drug) to hydrogen.

An example of utility support for hydrogen, from page 7 of National Grid’s April 2022 “Our clean energy vision”

What Does Everybody Else Say?

Aside from the gas utilities, who else is suggesting that hydrogen should be blended in with natural gas to heat your home and business?  Let’s see, starting with international experts and working our way closer to home.

Just this month, the venerable International Renewable Energy Agency came out with a report on accelerating hydrogen development in the G7 countries (Canada, France, Germany, Italy, Japan, the United Kingdom, and the United States). The report walks us through how hydrogen can be useful in meeting our climate goals if developed appropriately with the right use cases, and how each of the G7 nations would differ in some ways from the others. It’s an excellent read, and on the question of whether the US should mix and distribute hydrogen with natural gas (methane) for heating buildings, this chart on page 102 tells all (hint – go to the bottom row).

According to IRENA, residential heating is the lowest-priority end-use for hydrogen.

The IRENA study has more to say on page 109: “Despite hydrogen’s great potential, it must be kept in mind that its production, transport, and conversion require energy, as well as significant investments. Indiscriminate use of hydrogen could therefore slow down the energy transition. This calls for priority setting in policy making.”

Another international expert, Michael Liebrich of Bloomberg New Energy Finance, has put it this way: there is a clean hydrogen ladder. On the items listed in green, hydrogen is a “go” - we don’t have many smarter alternatives for those use cases. On the items listed in green, we should stop; there are better choices we could be making. And on items in yellow and orange, we should proceed with caution, because hydrogen might not be the best choice. Note that domestic heating is down at the bottom.

A couple of months ago, the US Department of Energy (DOE) came out with a draft National Clean Hydrogen Strategy and Roadmap. Give it a close read and you will find they list reasons for the country to reduce the cost of hydrogen for use in certain applications (see the graphic below), but you will not find a ringing endorsement of heating homes and offices with hydrogen delivered by underground pipes. This graphic from page 90 shows where DOE expects hydrogen to produce value over time: note that space heating is not listed at all. 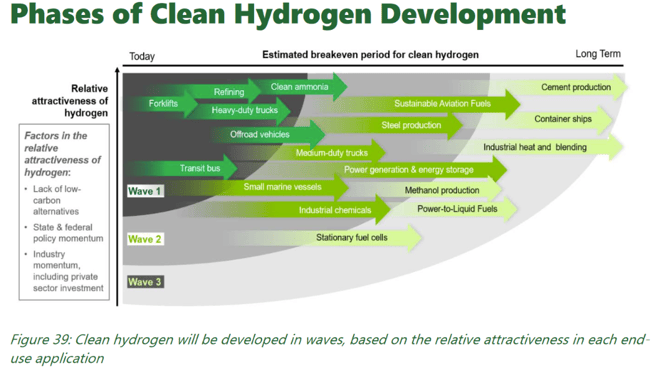 So far, the examples we’ve given have been from national or international bodies. But closer to home, governmental bodies have been deliberating on the role of hydrogen too.

“A Technical Report of the Massachusetts 2050 Decarbonization Roadmap Study”

The Executive Office of Energy & Environmental Affairs produced this volume to support its recommendations in the Massachusetts Clean Energy and Climate Plans for 2025/2030 and the upcoming CECP for 2050. Here’s what it tells us about replacing fracked gas with hydrogen for individual buildings:

In the end, the report concludes:

On November 30, the Massachusetts Commission on Clean Heat published its final report. We are going to break down that report for you in a few days, but this is what it said about hydrogen: absolutely nothing. Not one mention. The fact that the Commission, appointed by Governor Baker and working together for a year, could not find a reason to mention hydrogen is a clear signal that we all should focus on electrification as the pathway to zero-emission heating.

“Heating Sector Transformation for Rhode Island: Pathways to Decarbonization by 2050”

In 2019/2020, the state of Rhode Island commissioned a report on how to decarbonize the heating sector. On hydrogen, the report concludes: “It may be possible to blend hydrogen with natural gas at low concentrations (up to about 10%) without significant infrastructure upgrades. This can achieve near-term GHG reductions, but since such blending is limited to low concentrations, it does not offer a pathway to full decarbonization.”

And Lots of Studies

Earlier this year, energy researcher Jan Rosenow published a paper listing 32 independent studies all pointing out that hydrogen would be more expensive and less efficient than other clean alternatives. Since then, at least one more study has been added to the list. As Rosenow has said, the only studies claiming the opposite have been written at the behest of industry. An egregious example was recently exposed in the Boston Globe by Sabrina Shankman.

Another must-read is this report, Hydrogen Pipe Dreams, from Physicians for Social Responsibility, which outlines all the fatal flaws from health and safety to inefficiency and cost.

Gas utilities want to sell us renewable natural gas and hydrogen because it suits their business model. But unless the jury is comprised only of gas industry folks, the evidence is overwhelming - hydrogen does not belong in the pipes that heat our homes and businesses.

A concession: Some energy end-uses are going to be very difficult to electrify and for that reason, there’s good reason to develop hydrogen technology so that it can begin to make a big difference no later than, say, 2040. We’re talking about the use cases in the DOE graphic: aviation, cement production, and other processes we cannot yet easily electrify. But heating is simply not one of them.

Climate scientists are telling us very clearly that we’re not reducing greenhouse gas emissions fast enough to prevent suffering in the world. To minimize the damage, we need to pick up the pace of emissions reductions and focus on the things that make sense. Distractions must be avoided and hydrogen for heating is one such distraction. After all, we don’t owe gas utility shareholders guaranteed income forever. They are going to have to find their own soft landing.