Final Massachusetts Clean Energy & Climate Plan is Out. Now What? 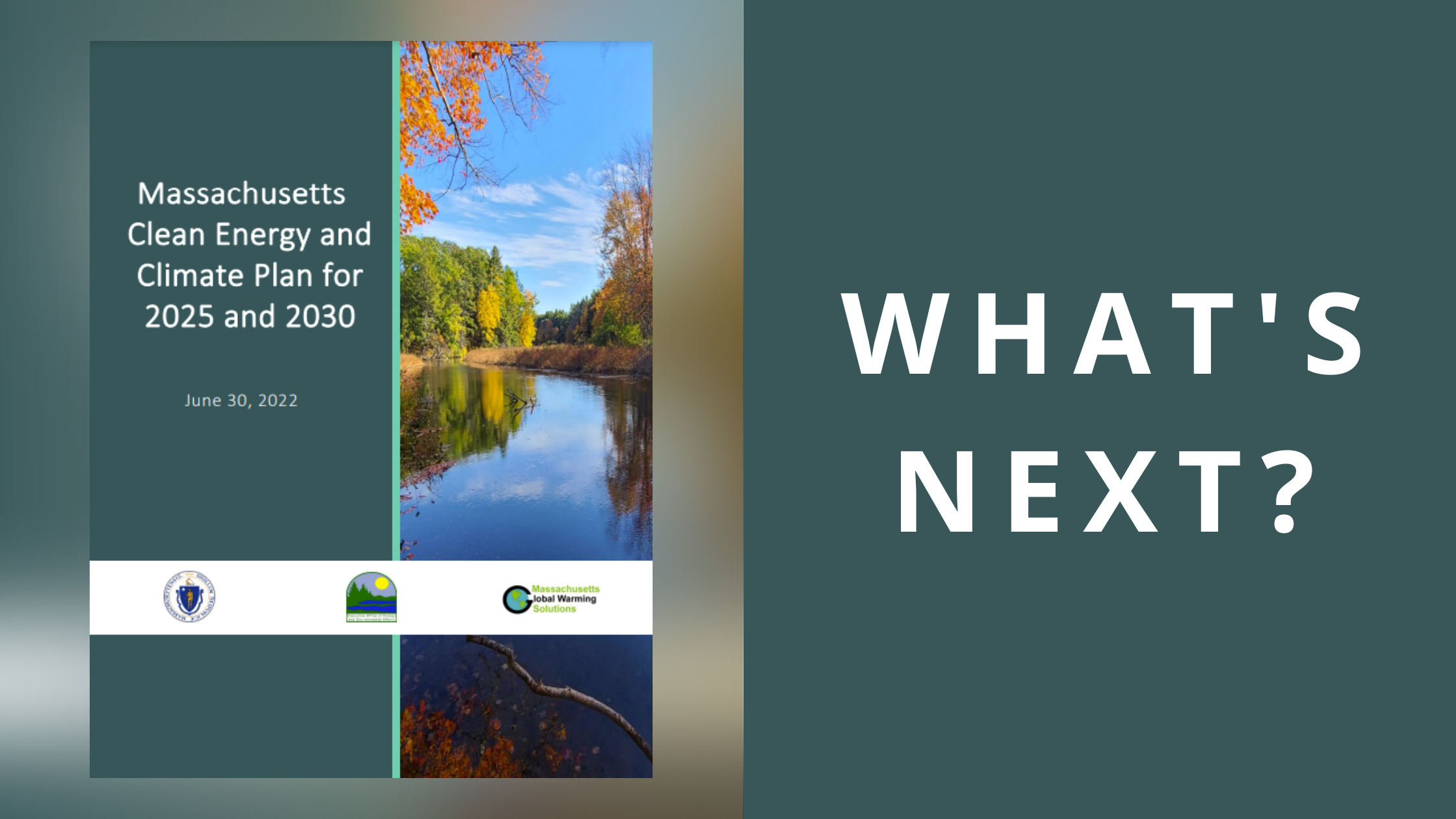 On June 30, 2022, the Massachusetts Executive Office of Energy and Environmental Affairs (EEA) released the final draft of the Clean Energy and Climate Plan (CECP) for 2025 and 2030. This document outlines the key strategies the Commonwealth will use to reach the statutorily-required 50% reduction in greenhouse gas (GHG) emissions under 1990 levels by 2030. We have been advocating for a strong CECP since the first version was published at the very end of 2020. It includes the "how" on reducing emissions from buildings, transportation, and electric power.

Here’s our take on this final version, and what advocacy is needed moving forward.

In 2008, Massachusetts passed the landmark Global Warmings Solutions Act (GWSA), which required the state to reduce economy-wide GHG emissions under 1990 levels by a certain amount by certain years. In 2021, the Climate Roadmap Bill updated the GWSA timeline: the Commonwealth must reduce GHG emissions by 50% by 2030 and 85% by 2050 (as well as net-zero carbon emissions by 2050, with carbon sequestration making up the difference). In addition, the Climate Roadmap Bill requires the Executive Office of Energy and Environmental Affairs (EEA - the executive agency tasked with carrying out this plan) with:

(a) writing a Clean Energy and Climate Plan (CECP) every five years to outline how the state will meet these requirements, and
(b) setting sector sub-limits as well as economy-wide limits.

This new CECP for 2025 and 2030 is the Baker administration’s response to the Climate Roadmap Bill, an update from the 2020 CECP draft that was published before that bill passed in 2021.

The CECP for 2025 and 2030 outlines the actions the state will take to reduce emissions by 33% by 2025 (the target calculated by EEA) and 50% by 2030 (the requirement set by the Climate Roadmap bill). Broadly speaking, it separates actions and emissions targets into specific subsectors:

In addition, the CECP takes into account the carbon sequestration potential of natural and working lands.


This table from the CECP shows how much each sector is supposed to contribute to carbon reductions by 2030.

Source: Page 23 of the CECP

Within each sector, EEA tried to calculate the ideal path to decarbonization: one that is most efficient, cost-effective, and equitable. This calculation relies on replacing polluting equipment with a cleaner alternative at the point of stock turnover (as in, when consumers and other actors need to replace their vehicle, heating system, or any other technology -- rather than replacing polluting technologies with cleaner ones before the ends of their useful lives).

What’s new since the original draft?

In addition to adding a 2025 goal and sector sub-limits, some changes from the first iteration of the CECP include: updated assumptions, particularly regarding travel plans; policy updates (such as offshore wind procurements); and targeting 90% emissions reductions by 2050 instead of just the mandated 85%.

The final CECP also includes a lot more information on job impacts and consumer savings due to the transition to clean energy technologies. Overall, EEA finds that four times as many jobs will be created as lost due to this transition and that between 2019 and 2030, there will be 22,000 additional jobs created.

The CECP calculates average household energy savings from clean energy technologies to be $400/year by 2030 and anticipates $400 million in public health benefits.

Overall, we think the final CECP is stronger than the original draft in that it covers topics that were neglected.

For example, the final plan addresses environmental justice more comprehensively than in the first version, and that’s appreciated. However, in other ways, we think the plan relies too much on wishful thinking and backloads important progress to the latter part of the decade, which is dangerous.

Because the plan is so long (127 pages, with another 173 in the appendices document), we have a blog post dedicated to each of the sectors where we have some expertise: heating, transportation, and the electric sector. Although there is more in the plan, we will limit our updates to these sectors. You'll be able to read these blogs by clicking below:

And please join us at an upcoming webinar on July 19th to learn all about the new CECP plan. The webinar is free & open to the public.

P.S. The CECP comes out just as the conference committee in Massachusetts is working on the final version of a 2022 climate bill. This bill reinforces and complements many of the elements in the CECP. Please take a moment to reach out to your legislator to call for a strong climate bill! Click here to send an email to your legislators.