What’s Plan B for active mobility? 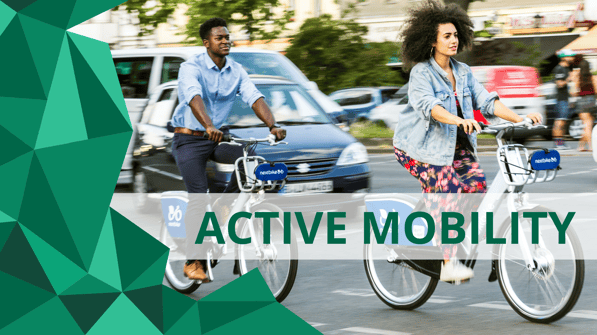 The Transportation & Climate Initiative (TCI) is a multi-state effort to phase down our dependence on gasoline and diesel fuels and to kickstart investments for cleaner, more affordable transportation options. In November 2021, the governors of Massachusetts, Connecticut, and Rhode Island withdrew support for the program. We're disappointed because without TCI, it's unclear how the states will achieve the emissions reductions needed to meet their climate goals.

The program is not dead – TCI can move forward any time if the three states agree to move forward – but the delay is a huge setback for climate action. To learn more about TCI itself, check out this webinar from February 2021.

This blog post is the second of a series to explore what's at stake if MA and RI don't come up with a Plan B to fund a cleaner transportation system.  Here's what we wrote about transit.

Both Massachusetts and Rhode Island now have a legally binding mandate to reduce emissions by 2030 (50% under 1990 levels in MA, 45% in RI). And in both states, transportation is the largest source of climate-warming gases (42% and 36%, respectively), so meeting our climate goals means rapidly changing the way people and goods move across the state and region.

A decarbonized transportation system can’t just rely on replacing polluting vehicles with less-polluting vehicles (although, of course, that’s a critical piece!) TCI has escalated key conversations on how to build a better, more robust transportation system that reduces congestion, improves health, creates new jobs, and gives New Englanders more options to get where they need to go affordably.

Investments in active mobility, such as sidewalks for walking and bike lanes for cycling, have historically been underfunded in favor of car-centered infrastructure, though 20% of all car trips are one mile or less.

The formula is simple: there are ways to encourage short trips to be made by bike or foot. Fewer short car trips eases stress on roads, clears congestion, and reduces the total number of vehicle miles travelled to cut into emissions. The health benefits of active mobility pile on top of the health benefits of reducing tailpipe pollution. According to one model, spending TCI funding on active mobility and transit would deliver the most benefits, measured by total deaths avoided (due to more biking and walking, as well as better air quality) and monetized health benefits.

You don’t have to switch to being a bike commuter to benefit from better bike infrastructure; safer streets and less congested roadways are benefits to be enjoyed by everyone, including those who drive. Here are some tangible examples of how TCI funding could improve the quality of our active mobility infrastructure.

Rhode Island is one of the most densely-populated states in the nation, which makes bicycle lanes a key opportunity for both recreation and travel.  The  Bicycle Mobility Plan outlines a framework for bicycle infrastructure improvements throughout Rhode Island and called for $242 million over ten years.

However, the funds currently allocated to bicycle mobility is $59 million short of what the state’s budgeted plan. The 2022 Green Economy Bond also doesn’t pledge any money to active mobility. In other words, there’s a big gap that TCI could have helped to fill. Here are some examples of what a more complete active mobility network could look like across Rhode Island.

This project is to upgrade the existing Trestle Trail to meet federal multi-use and ADA standards, increasing the type and volume of users. Funding for this project was originally included in the Statewide Transportation Improvement Plan but was cut by RIDOT, redirecting $37 million from active mobility to highway expansion. The Town of Coventry has not been able to secure a new funding source to get this project back on track, leaving the project on the bubble.


The beaches in South County are a recreational and economic boon for Narragansett and South Kingstown. An 11-mile coastal bikeway on Route 1A could link five key commercial areas – Narragansett Pier, Wickford Village, Hamilton, Saunderstown, and Bonnet Shores – to attract visitors, develop a major cycling/walking/running throughway, and provide transportation benefits for residents.


East Main Road accommodates less than 20,000 daily vehicle road trips but has four travel lanes. By putting the road on a “diet,” and converting one travel lane into a bicycle lane, bike travel can be made safer for cyclists and pedestrians without disrupting vehicle traffic. The idea for this project was identified in a 2011 Transportation Study for Aquidneck Island and it was named as one of the Town’s 2020 legislative priorities.

Here's a small piece of the state-approved Bicycle Mobility Plan that discusses the redesign of East Main Road.

In Massachusetts, 21% of trips are under half a mile and 57% are under three miles, according to MassDOT. These are all prime candidates to switch to active mobility. Massachusetts last updated its Bicycle and Pedestrian Transportation Plans in 2019 and both plans detail the kinds of infrastructure projects we all want to see – projects that make walking and biking more accessible, safe, and convenient for folks across the Commonwealth. This 2021 Bicycle & Pedestrian Update from MassDOT details some projects that have been completed since the 2019 plans. Here are some highlights.

A completed project in Everett, MA

An upcoming project in Worcester & Shrewsbury

Funding for such projects comes from different pots (you can learn more about them here), but one of the more familiar programs, the Complete Streets Funding Program, is funded to the tune of $50 million in the latest Capital Investment Plan (for 2022-2024). We would love to see TCI funding increase the pot of money available for projects like these! (Reminder, Massachusetts could expect revenue to the tune of $160 million/year from TCI.)

More state funds would also help the Commonwealth capture more federal funding. For example, Massachusetts recently applied for a federal grant that would fund a bus-only and bike-lane to the Lynnway, which runs through an environmental justice community burdened by the pollution of this six-lane highway. MassDOT is putting $15 million on the table in an effort to capture $11.2 million from the federal government. 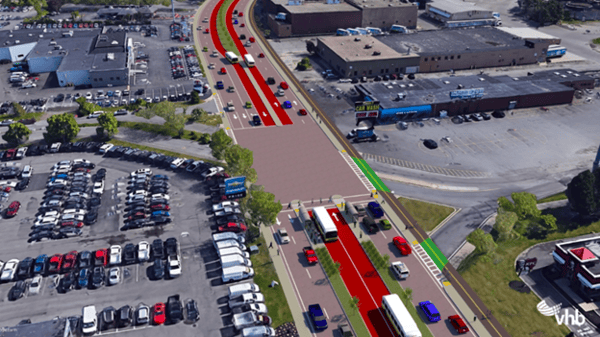 Building infrastructure for active mobility is good for the climate and good for car drivers and non-car-drivers alike. As Massachusetts and Rhode Island begin to receive funding from the bipartisan Infrastructure Investment and Jobs Act (IIJA), it’ll be up to advocates – like you! – to make sure those dollars don’t just widen highways, but also help build the infrastructure we need for walking, biking, transit, and electrification.

Rhode Islanders: a public comment period to advocate for how IIJA funds should be spent ends on Monday. Click to take action to tell the State why prioritizing carbon reduction through active mobility, transit, and electric vehicles is crucial!

And while we focus on IIJA funds in the short-term, let’s not forget that we need a long-term plan and funding source to replace TCI.