The Transportation Climate Initiative is on life support. Do states have better ideas for reducing transportation emissions?

Earlier this week, we learned that Connecticut Governor Lamont withdrew his support for the regional Transportation & Climate Initiative (TCI). When that news hit, we knew it was going to put pressure on the governors of Massachusetts and Rhode Island to follow suit. On Thursday, a spokesman for Governor Charlie Baker said that Massachusetts will not move forward with TCI because there is no longer a multi-state commitment. We haven’t yet heard from Rhode Island Governor McKee, but we anticipate a similar statement.

Green Energy Consumers is part of a large coalition of organizations across the Northeast and Mid-Atlantic region advocating for TCI because the transportation sector is our largest source of greenhouse gas emissions. TCI would provide revenue that our states desperately need to fund clean transportation projects, such as improvements that make for better public transit, walking, biking, and vehicle electrification. We believe those funds should be targeted to the communities most burdened and least served by our current transportation system and its reliance on individual ownership of gas-powered cars – electrifying public transit and school buses, investing in bike lanes and safe sidewalks, expanding bus rapid transit, accelerating the electrification of medium- and heavy-duty diesel vehicles.

TCI would generate $160 million per year for Massachusetts and $20 million per year for Rhode Island. These funds would allow us to invest in needed projects directly, and could also be used as matching funds to capture federal dollars that will soon be available via competitive grants thanks to the recently passed Infrastructure Investment and Jobs Act. 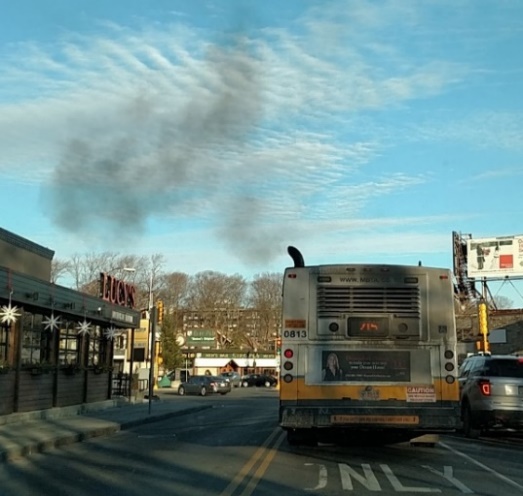 Dirty diesel buses we would like to see electrified in the MBTA.

What does this mean for our states?

In December 2020, the Baker administration released a draft Clean Energy and Climate Plan for 2030 (CECP), which outlined the strategies needed to achieve 45% emissions reductions under 1990 levels by 2030. (Since the passage of the 2021 Climate Roadmap bill, the state now has to achieve 50% emissions reductions by 2030 and the state is busy re-writing the CECP.) In the transportation section of that CECP, the Commonwealth put TCI high on the priority list. More recently – Tuesday, Nov. 16 – Katie Theoharides, the Massachusetts Secretary of Energy and Environmental Affairs, told Commonwealth Magazine that Massachusetts needed a program like TCI if it's going to have a chance of reaching its goal of net zero emissions in the state by 2050. “We can’t get there without a program like this,” she said.

Respectfully, we have to ask Secretary Theoharides, as well as the governors and legislators of all the states that were working towards TCI: What other programs can deliver the guaranteed emissions reductions in the transportation sector promised by TCI? How else will states generate the kind of revenue TCI would have provided to invest in clean transportation solutions? If there are other programs that could have met these dual needs, why weren’t they mentioned in the draft CECP?

Governor Baker’s spokesman pointed to federal funding as a substitute for TCI revenue. That’s not a good answer. There is not enough federal transportation funding coming down to enable the greenhouse gas emission (GHG) reductions required by Massachusetts or Rhode Island law.

Politics over planet and people

We can understand some of the politics involved with the retreat on TCI. When it comes to a program that might raise gasoline prices, no state wants to go it alone. And given today’s high prices, politicians see awful timing.

We might understand the cold feet, but we cannot accept surrender. Not when Plan B is invisible.

In Massachusetts, the Baker administration must finalize the CECP by July 2022. It’s up to us to stay engaged in the process and demand an accounting of where the transportation GHG emission reductions will come from, given this decision to back out of TCI.  And it’s pretty much the same for Rhode Island: in October, Governor McKee released a working draft and recommendations for 2030 on a wide range of state issues. Featured prominently in the transportation section was the need to pass TCI legislation. What will Governor McKee’s final draft look like if TCI is absent?

We’re not just calling on our states’ governors with this blogpost. State legislators voted overwhelmingly for the climate laws we have on the books. Now they have to offer the governors a helping hand or take control of the situation to make sure we don’t exceed our emission limits. And we, the public, need to hold all elected officials accountable on these crucial emissions reductions.

P.S.  Politicians may not be reading the room.