How good is the Mass. Clean Energy and Climate Plan for cleaning up the grid?

The Baker administration released their ten-year Clean Energy & Climate Plan (CECP), which is open for comment through February 22. The comment period for the CECP is an excellent opportunity to set the Baker Administration on course to tackle climate emissions within multiple sectors of the economy. You can read the whole plan here.

We’re working on our formal comments on the whole plan and will share them soon. Meanwhile, here are our comments on how the plan would treat the electricity sector. 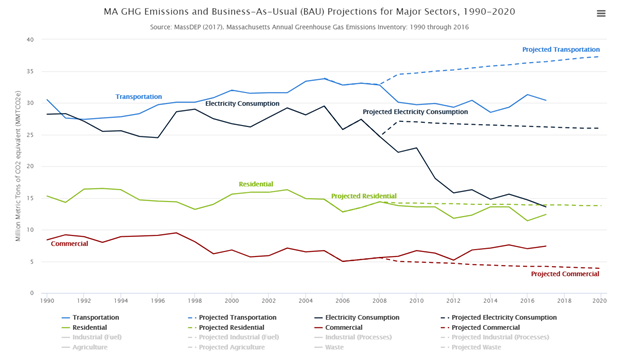 Even though we’ve made great progress in the electricity sector, there are opportunities to make the grid even cleaner. According to the plan, 21% of the emission reductions this decade would come from making our power a darker shade of green. Since the 2030 CECP’s plan for emissions reductions in the transportation and buildings sector largely rely on electrifying transportation and heating, progress in the electricity sector underpins the whole plan.

Raising the Clean Energy Standard is a Must

More than half of the power sector emission reductions in the plan  come from adjusting the Clean Energy Standard (CES) to “at least 60%” by 2030. Under current rules, utilities and other electricity suppliers are required to have increasing percentages of clean energy resources. Resources that qualify include wind, solar, and hydro purchased from Hydro Quebec as a result of the 2016 Energy Diversity Act. The current policy would have the CES reach just 40% in 2030.

We strongly support increasing the CES to at least 60% by 2030 because, without it, already-planned clean energy procurements will flood the REC market and render the CES and RPS ineffective. In 2023 or 2024, Massachusetts will begin receiving about 20% of its power from Hydro Quebec. Shortly thereafter, we will have 1,600 megawatts of offshore wind power coming from the Vineyard Wind and Mayflower Wind projects (represented in sky blue and black, respectively, in the map below). 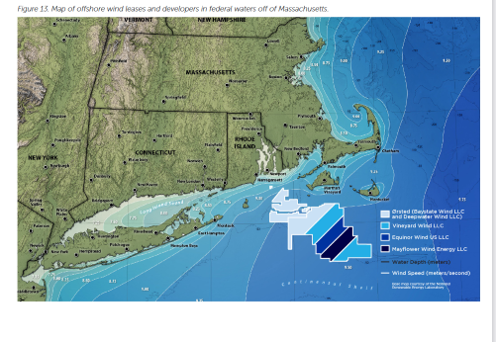 On top of that, we will have increasing amounts of solar power all the way through 2030. This would add up to more clean power than needed to meet the current CES in 2030. If the standard is not adjusted upwards, Massachusetts would have to sell off a lot of that clean power to other states and forfeit the right to those associated emission reductions. For that reason, we strongly support raising the CES to at least 60% by 2023, when the hydro power is expected to come online, and to 100% by 2030.

We’re optimists that there are many ways to reduce emissions in ways that are inherently fair or that can be made to fair to everyone. Increasing the CES is inherently fair insofar as everyone pays into it, everyone benefits, and low-income people can qualify for electricity rate discounts. We also know that offshore wind prices are proving to be affordable. And with the right workforce development efforts in place, we can ensure that everyone is given a fair shot at the good-paying jobs that will be created in the growing offshore wind and solar industries. 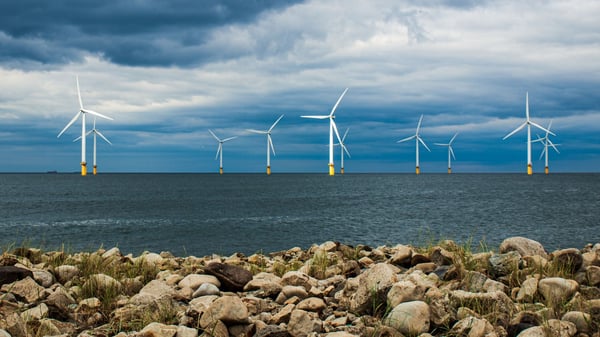 {We understand that some people would prefer not to have power from Hydro Quebec in the state’s portfolio. But that decision has been made. The legislature authorized the purchase in 2016, utilities signed the contracts, and the power will come here when the project is physically completed.}

It should be noted that Rhode Island appears to be headed towards adopting policies to reach 100% renewable electricity by 2030. Other states are moving towards that goal and President Biden wants the nation to be there by 2035. Given the offshore wind resource we have in the Bay State, along with solar and the hydro, we agree that 100% by 2030 should be in the CECP. In our view, it would be one of the easiest policies to implement in the plan and could make up for potential shortfalls from other strategies in described in the plan.

{The CECP will have to be revised in order to accommodate certain aspects from the legislature’s expected passage on Thursday of An Act to Create a Next Generation Roadmap for Climate Policy.  In particular, the new law requires the administration to set an emissions limit in five-year increments, starting with 2025. Increasing the CES to 60% would help greatly to meet any limit proposed for 2025. It also increases the Renewable Portfolio Standard by 5% between 2025 and 2030. That would contribute to the overall 60% of the CES.}

Reducing Emissions from Imported Power: Great, But We Need Details

Another large portion of the emission reductions from the power sector would come from making changes to the regional power grid in collaboration with the five other New England states. In general, this approach makes a lot of sense, but this part of the plan could use a little more elaboration. We’ll be asking the Commonwealth to provide a little more detail when we send in our official comments on the plan.

The section on electricity supply has several strong policies we support, especially the increase to the Clean Energy Standard to at least 60%. However, we recommend that the plan be revised to include a set of measures designed to foster the model that we call “Green Municipal Aggregation” (GMA) (aka Community Choice Aggregation), which a growing number of communities in the Commonwealth have adopted since 2016 when Melrose and Dedham were the first.  With GMA, communities choose an electricity supplier that includes in the default product more Class I renewable energy content than required by the Renewable Portfolio Standard.  Communities also offer “opt-up” products that allow consumers to receive 100 percent Class I renewable energy.

We estimate that by the end of 2021, the GMA model will be responsible for increasing voluntary demand (over and above the RPS) for Class I power of roughly 700,000 to 1 million megawatt hours per year, the equivalence of about 200 large-scale wind turbines.  Put another way, GMA adds to green power demand equivalent to an increase to the RPS of about 2 percent.

Unfortunately, communities that have adopted GMA at the local level have been waiting too long for their plans to be approved by the Department of Public Utilities – often on the order of one full year. This delay has slowed down emission reduction efforts and is sending the wrong message to communities that might be contemplating aggregation. 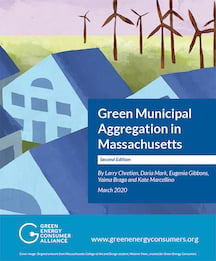 GMA is perhaps the most cost-effective and most equitable carbon reduction measure available through public policy.

Beyond the initial approval of aggregation plans, the CECP should also provide financial support to aggregations. A small incentive would leverage the voluntary purchase of even more green power.  For example, we suggest that communities with GMA be placed at the head of the line for funding under the Green Communities program.