DPU approval for pipeline tax sought no more, but Spectra project still very much in the works 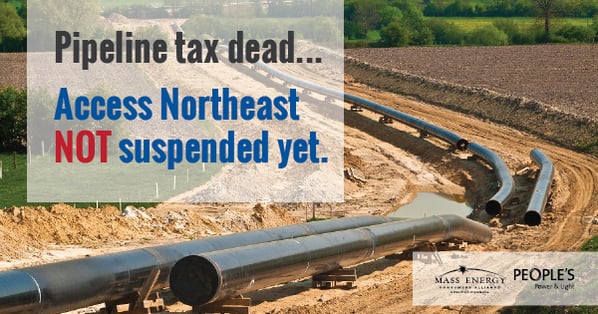 In light of SJC ruling, utilities withdraw petitions that would have allowed for pipeline tax.

Death of the pipeline tax means that the utilities and ANE developers must revisit how to get their project financed. Without ratepayer funding, particularly in Massachusetts, it will be a challenge to be sure, but ANE is not dead yet.

In October 2015, the Baker administration’s Department of Public Utilities (DPU) issued an order in docket 15-37 that allowed National Grid and Eversource to charge electric ratepayers for costs related to long term gas capacity contracts and the new pipelines needed to move the gas. In other words, the DPU determined that it had authority to grant this permission and subsequently gave the utilities the green light to charge their customers to help finance new fracked gas pipelines. Conservation Law Foundation sued DPU asserting that the Department lacked the authority to approve the maneuver and that the maneuver was against the law.

In the meantime, the utilities petitioned DPU for approval of contracts for specific projects: Kinder Morgan’s Northeast Energy Direct (NED) (DPU docket 16-07) and Spectra Energy’s Access Northeast (ANE) (DPU dockets 16-05 and 15-181). Public hearings were held regarding these dockets and Mass Energy testified in opposition to the proposals, citing several reasons why the move made sense neither economically nor environmentally and urging the DPU to reject the scheme outright. Still, DPU progressed.

Kinder Morgan put NED on hold indefinitely in May. This was a welcome turn of events, but ANE, whose financing hinged on the utilities’ ability to recover costs by charging electric ratepayers an additional monthly fee, the amount of which could only be determined once construction was complete, remained in play. So, DPU moved ahead.

Stakeholders pushed hard to include a ban on the pipeline tax as part of the comprehensive energy bill that was underway during this time. The Senate unanimously supported the ban in its bill. A 97-member majority in the House supported a legislative move to protect ratepayers from the pipeline tax. Hundreds of Massachusetts residents joined the People Over Pipelines march that culminated in a rally at the State House urging legislators to ban the tax. Yet despite these efforts, the final bill was silent on the issue.

Then, last Wednesday, the state’s highest court came down on the side of consumers and the environment finding that DPU’s initial ruling was invalid and in violation of the intended purpose of the 1997 Restructuring Act, “because, among other things, it would undermine the main objectives of the act, and reexpose ratepayers to the types of financial risks from which the Legislature sought to protect them.”

This was a huge win!

Utilities withdraw, but ANE NOT suspended

Without question, the SJC decision dealt a tremendous blow to ANE, one that will make securing financing quite difficult. The utilities had no choice but to withdraw their petitions.

However, project developer Spectra Energy has said that it will proceed despite this “setback”. The company continues to seek permission from local commissions for various surveys related to project planning and construction.

Their pursuit is bolstered by high-level, misguided support for more gas including from the Baker Administration whose spokespeople have expressed disappointment in the ruling and maintain that Massachusetts “needs” more natural gas. Never mind that bills (which consumers actually pay, not oft-cited rates) are average thanks to investments in conservation and efficiency. They call for more gas irrespective of the fact that increasing overreliance will make us more susceptible to price volatility inherent to natural gas. And they do so without regard for the fact that more gas is at odds with the state’s statutory obligation to ratchet down emissions by 2020 and 2050.

Actions you can take

Now that the pipeline tax has been defeated, there are actions you can take to ensure focus is placed squarely on policy and energy solutions that keep us moving towards our climate goals and clean energy future. Solutions like those pointed to in the report released by the AGO and those that will build on the foundation set by the energy bill the Governor just signed.

Thank your legislator(s) for taking a strong stand against the tax. Even before the SJC issued its decision, the MA Senate unanimously voted to ban the funding maneuver as part of its energy bill and a 97-member majority in the House sent a letter to leadership opposing the proposed scheme. You can also thank Attorney General Maura Healey and her office for standing with consumers on this issue and for commissioning a study that credibly makes the case for gas alternatives. And, stay tuned, because although the pipeline tax is dead, ANE has not yet met its demise.