Arrogance and Greed of the Pipeline Tax 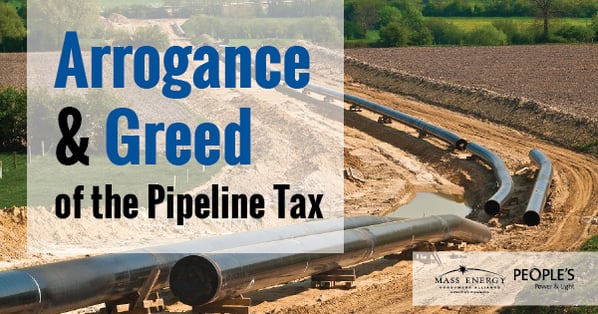 On August 17, 2016, we were thrilled to learn that the Mass. Supreme Judicial Court ruled that taxing electricity ratepayers to finance a natural gas (read – fracked methane) pipeline was illegal according to the 1997 Electric Restructuring Act.  We saw the scheme, jointly proposed by Spectra, Eversource, and National Grid, and strongly backed by the Baker Administration and House Speaker Robert DeLeo, as being awful for consumers and the environment.  Spectra Energy is the pipeline project developer.  Eversource and National Grid are investor-owned regulated monopoly utilities, that combined have a 60% financial stake in Access Northeast.

We’re not going to repeat all the arguments against the pipeline here, but one theme that kept coming up was, “If the gas pipeline is such a great idea, why don’t utility shareholders foot the bill, rather than ratepayers – especially electric ratepayers.”

If you think the words “arrogance” and “greed” do not fit already, read the following excerpt from the testimony under cross-examination of an Eversource executive, James Daly, before the Department of Public Utilities on August 9 regarding the Access Northeast project and its absurd financing mechanism. The Mr. May referenced in testimony is Thomas May, CEO of Eversource:

Q. If one were to take Mr. May's total number of shares on March 7th -- of March 7th -- let's say 1.3 million shares -- and multiplied those shares by the closing price on March 7 at $56 per share, Mr. May's Eversource shares would be worth approximately $72.8 million. Would that be accurate?

A. [DALY] With that math, you could arrive at that price. I don't know anything else about  Mr. May's share ownership.

Q. That was my question. Thank you.

But what [Exhibit AG-1, at page 53, Share Ownership Guidelines/Holding Periods] says in the first paragraph is that there is a minimum requirement for the chief executive officer, and that minimum requirement is he has to have an ownership level in Eversource Energy shares of six times his base salary. That would mean that Mr. May is required to have an ownership interest in Eversource of at least $7 million, yet Mr. May's ownership interest in Eversource as of March 7th, 2016, was closer to ten times his base salary, or $72.8 million, as you pointed out, if you do that math.

Q. Mr. Daly, would you say that the ANE Project is likely to increase the value of Eversource's shares?

A. [DALY] Just to put it in context: The ANE Project is over $3 billion total investment. Our share of that is 40 percent, so just over a billion dollars.

Eversource's capitalization or capital base in the time frame that this project would come to fruition is about $18 billion. So 1 billion out of 18 is not exactly a huge percentage.

SHOPE: I think that the witness is a very intelligent person who can understand a paraphrase, and he can critique -- disagree with the substance or not.

Q. So you're saying, sir, that -- so therefore -- you would agree, therefore, that any financial interests that any of the intervenors may have in this proceeding do not affect the credibility of their testimony. Is that your current position?

A. [DALY] Oh, no. In the case of NextEra, their profit motive is very, very obvious, to keep prices high so that customers pay high prices for electricity. That benefits their bottom line. I think their motives are very clear in this case.

Q. But it's also your testimony that the profit motives of Eversource Energy in proposing these contracts and this project are irrelevant. Is that true?

A. [DALY] I don't say they're irrelevant to the intervenors. They will make it relevant to themselves. It's up to them how they want to do it.

Q. But you're also saying that the amount of profit that Eversource Energy expects to make from this project is totally irrelevant to this proceeding?

KIMBALL: I'm going to say -- objection, asked and answered. It's –