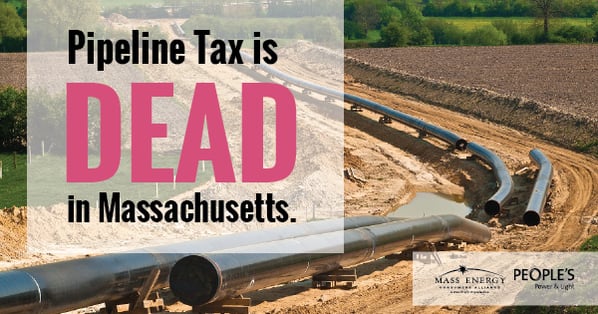 Boston, MA – The Massachusetts Supreme Judicial Court (SJC) issued a decision on Wednesday morning affirming what consumer and environmental advocates have maintained all along: the utility-proposed ‘pipeline tax’ violates Massachusetts law. The unprecedented scheme proposed by National Grid and Eversource and approved last fall by the Department of Public Utilities (DPU) would have allowed utilities to recover costs of long-term gas capacity contracts by applying an additional charge on consumers’ monthly electric bills.

However, plaintiffs in the case, including Conservation Law Foundation, argued that the DPU lacks authority to grant the utilities permission to recover costs in this way and that the proposal was not legal under the 1997 Restructuring Act. Justice Cordy drafted the ruling. It states that the DPU ruling is invalid and goes against the intended purpose of the law “because, among other things, it would undermine the main objectives of the act, and reexpose ratepayers to the types of financial risks from which the Legislature sought to protect them.”

The decision has significant bearing on Spectra’s Access Northeast (ANE) pipeline project in which National Grid has a 20% stake and Eversource has a 40% stake. Without a tax on ratepayers in Massachusetts, financing for the pipeline is unlikely to be obtained.

“The utilities’ relentless pursuit of profits from Access Northeast, which would entail the imposition of costs and risks onto their very own customers, demonstrates the disconnect between National Grid and Eversource’s interests and the interests and needs of Massachusetts,” said Eugenia Gibbons of the Mass Energy Consumers Alliance. “If new pipelines are such great investments, then the utilities' shareholders, not consumers, should foot the bill.”

Arguments for the pipeline were thoroughly discredited by a study released by The Analysis Group on behalf of the Attorney General’s Office, as well as reams of testimony submitted to the DPU by the Attorney General, Conservation Law Foundation, and other energy stakeholders.

Additionally, stakeholders have argued that more gas moved through a massive new pipeline and related infrastructure would exacerbate overreliance on the fossil fuel source and is at odds with the Commonwealth’s legal mandate to address climate change by reducing emissions 25% below 1990 levels by 2020 and 80% below 1990 levels by 2050.

The ruling comes nearly three months after the same court’s ruling in a case brought against the Massachusetts Department of Environmental Protection (DEP). In that decision, the court determined that the state has a statutory obligation to promulgate regulations that will achieve required greenhouse gas emissions reductions by 2020. Mass Energy was a co-plaintiff in that case.