Making the Most of EV Batteries with Vehicle-To-Grid 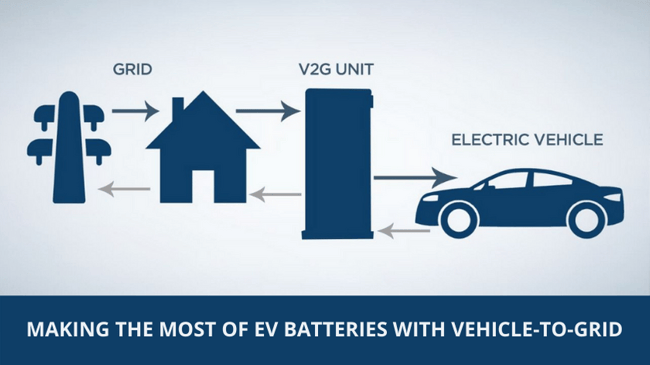 Green Energy Consumers Alliance supports the idea that we need to electrify everything. By shifting sectors that have been historically powered by the combustion of fossil fuels, such as heating and transportation, to electricity, we can dramatically reduce emissions in the short-term while setting up a path to a net zero-carbon society in the long-term.

We’re excited about electric vehicles (EVs) because of the variety of benefits they offer. EVs are good for consumers because they are less expensive to fuel and maintain. Depending on where they’re charged, they can reduce the greenhouse emissions responsible for climate change by 75% or more compared to gas guzzlers. The absence of tailpipe emissions also makes EVs an effective public health tool to tackle asthma and other respiratory illnesses prevalent in smoggy urban areas. And in the future, EVs can help build a more resilient and cleaner electrical grid.

Last July, we wrote about how good things happen when you charge your EV off-peak. “Vehicle-to-Grid” or “V2G,” is the next level of interaction between EVs and the grid.

Today, with the exception of a few pilot programs, electricity can only flow in one direction – from the utility’s wires to an EV’s battery. V2G is a technology that allows the battery in an electric vehicle to be used as energy storage for a home, building, or the electrical grid. With vehicle-to-grid, you can think of an EV as a miniature mobile power station. The energy stored in an electric car could offer a variety of services, including providing backup power for a home in a blackout, storing solar energy in the middle of the day for later use, or filling in the gaps between supply and demand that happen on the grid constantly.

Vehicle-To-Grid (V2G) technology allows electricity to flow bidirectionally between the grid and an electric vehicle, opening opportunities for grid operators to optimize power demand and improve grid stability, and for consumers to recuperate costs by re-selling surplus energy to the electric utility. (Figure from Nevada's Sustainability Alliance.)

By managing EV charging on a widespread scale with V2G, grid operators would have more flexibility in how they meet demand to keep the lights on. Participating EV drivers could get more value out of their battery by reselling energy back into the grid when they’re not driving. And as some studies indicate, V2G would not necessarily degrade EV battery life, and it may even extend it.

The power shut-offs that ensued after PG&E’s attempt to prevent wildfires in northern California are a reminder of the vulnerability of our grid. PG&E resorted to planned blackouts when it identified several high-voltage transmission lines that threatened to start wildfires in dry forested areas. V2G would offer an opportunity to decentralize energy generation and distribution, making it easier to restore power to households when key distribution infrastructure is down.

Our future depends on renewable energy production coupled with battery storage. However, solar and wind power are non-dispatchable resources, meaning we can’t make the sun shine brighter or the wind blow harder when we need more energy in the same way that we can ramp up how much gas is burned in a gas-fired power plant. Storage will make it possible for renewable resources to supply the majority of our energy needs in the near future. Since consumers are purchasing EVs anyway, it just makes sense to use them for energy storage, too. 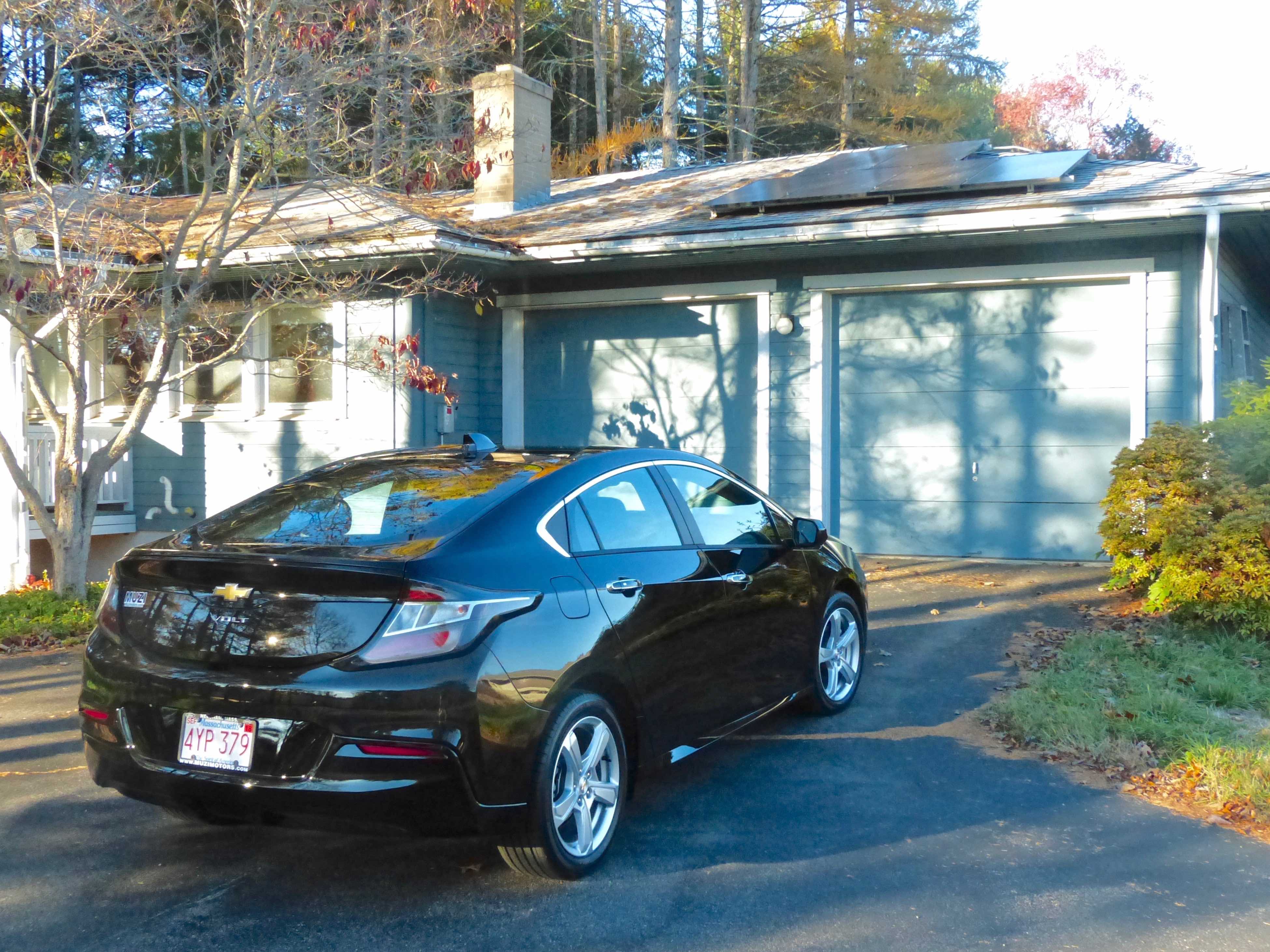 For those with solar rooftops on their homes, EVs could eventually serve as transportation and storage for energy to be used by home appliances later. We're far off from this type of vehicle-home integration, but it's easy to imagine the popularity of such a technology.

In addition to improving the resiliency of our electrical grid, V2G technology can provide a flexible tool to manage the day-to-day operation of the grid. During high energy demand periods, V2G could be paired with ‘peak shaving’ programs. Supplying energy at peak times from EVs would reduce marginal energy demand, which is typically met with expensive, and often dirty, power sources. By implementing programs to encourage EV drivers to shift their charging to off-peak times (typically in the middle of the night, which is when many drivers choose to charge anyway), EVs have been shown to decrease overall utility costs. That means lower electricity rates for everyone, including those who don’t own an EV.

In this context, V2G is an advanced smart charging tool that could be integrated into a system that brings widespread benefits to everyone: EV owners, grid operators, utilities, and the environment.

V2G requires three main technical components: a bidirectional charging unit that can manage two-way flow of energy, a bidirectional EV that can send energy from the battery to an external load, and software to manage charging according to utility price signals and driver preferences.

However, the electrical grid hasn’t changed much in a hundred years. Electricity is generated at centralized power plants and transported for use in homes and buildings in a one-way fashion. Decentralizing distribution infrastructure to make something like V2G possible requires many changes in grid regulation, markets, management, security, and how we all think about our energy system as consumers.

This will take time. It will be far more difficult to aggregate the V2G capabilities of thousands or millions of individual passenger cars than fleets. This is why fleets are moving more quickly with this technology. Delivery vehicles owned by Amazon, UPS, FedEx, and USPS will find their way to V2G ahead of folks at home. 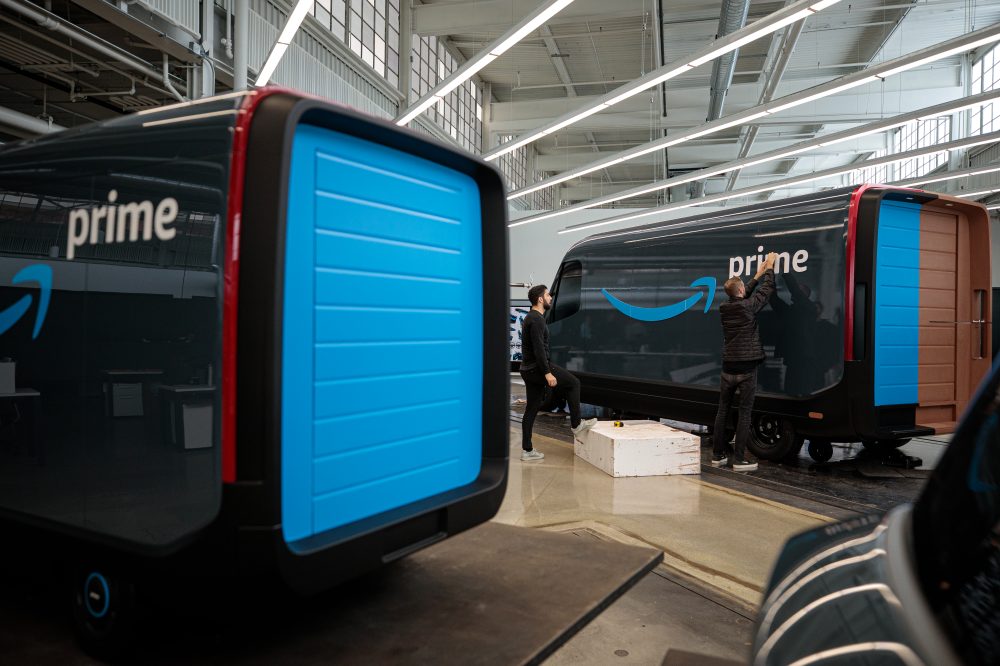 Amazon announced that it would order 100,000 electric delivery vans from Rivian, an electric vehicle startup company. In addition to being quieter and cheaper to fuel, these vans may become an asset to Amazon as a revenue-generating grid resource if they decide to pursue V2G. (Image source: Jordan Stead / Amazon)

As we noted in a previous blog, electrification of public transit is a win for both climate change and air quality. Bus fleet operators will likely jump into V2G first after they commit to electric buses. The batteries utilized in buses are much larger than passenger cars, and it is easier to manage charging for fleets with regular, predictable driving routes compared to hundreds of cars that are owned and operated by individuals on different driving schedules. 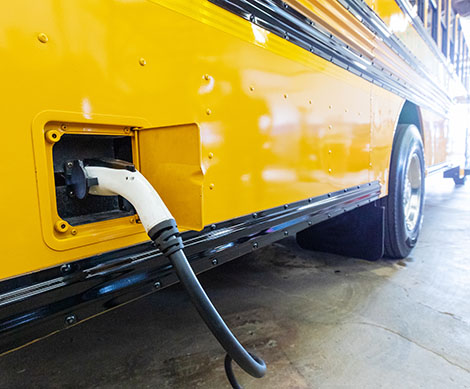 School buses are particularly attractive for V2G pilots because they spend a significant part of the day, week, month, and year parked according to the school schedule. This is ideal for providing backup power for the U.S. power grid when it is under stress. (Image Source: Dominion Energy)

School districts in California and New York have already taken advantage of V2G technology and are in partnership with tech companies and utilities to reduce the total cost of ownership of their electric school buses in two ways: by re-selling electricity stored in batteries and by taking advantage of time-of-use rates to charge at off-peak times. Just recently, Dominion Energy in Virginia announced plans for the nation's largest electric school bus deployment to provide cost savings to school districts while improving air quality for the children riding them.

And even though their driving schedules are more demanding, transit buses are not waiting on the sidelines. Last year, the Chicago Transit Authority, a pioneer in the deployment of electric transit buses, introduced new high-power charging options that are compatible with V2G and started considering energy storage systems to balance the grid during heat waves.

Technology evolves fast, and we are excited for the possibilities that EVs offer to reduce emissions while creating other co-benefits. With climate change upon us, the urgency of cleaning up our transportation sector grows by the day. Americans consumed 7.47 billion barrels of oil in 2018, which accounted for over a third of our total energy consumption. Most of this oil was used to produce transportation fuels, but as more people switch to electric cars, more of our total energy use will shift towards electricity.

The modern grid will therefore need to support more electricity-generating resources than ever. As more sectors turn to electrification and more of our energy comes from renewables, the old-school way of managing the grid will not be able to meet the demands placed on it. Vehicle-to-grid technology is one idea that could become mainstream with a modernized grid. It may be a long time until EV drivers can provide backup power from their cars to their homes, but the relationship between these two traditionally distinct sectors is evolving quickly.