Renewable Energy Is Affordable – Look At These Off-Shore Wind Prices

Posted by Yaima Braga and Larry Chretien, with contributions from Patrick Knight of Synapse Energy Economics on Monday, February 24, 2020 @ 07:30 AM

Emissions from the New England power grid have fallen significantly in the last several years and that’s obviously a good thing. But it’s even better when we can see that the wholesale price of electric energy has been holding fairly steady during this period of environmental progress. The transition to clean energy is producing benefits at a lower cost than might have been projected several years ago. 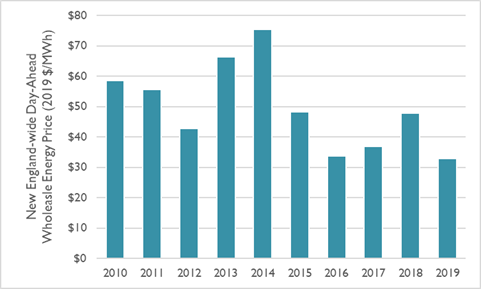 To keep the party going, recently released information about the Mayflower Wind off-shore project should give us even greater confidence that we will be able to meet our energy and climate goals affordably from now on.

According to a February 11 letter from the Mass. Department of Energy Resources to the Department of Public Utilities, the 804 megawatt Mayflower Wind project will provide zero-emission energy to ratepayers of the three investor-owned utilities in the Commonwealth—Eversource, National Grid, and Unitil—at an astoundingly low price of $77 per megawatt-hour (MWh) in nominal dollars. Adjusted for inflation and the time value of money, the price is $58.5/MWh. It’s a new benchmark for off-shore wind in the United States.

As recently as 2013 and 2014, average annual wholesale energy costs in New England were $66 to 75/MWh , higher than the prices of Mayflower Wind and Vineyard Wind. The high energy costs in these two years were largely due to high winter prices caused by natural gas constraints. Even though future natural gas prices are projected to be low on an annual, nationwide basis, if New Englanders continue to use more natural gas in the absence of more renewables and energy efficiency (think electric vehicles and heat pumps), we could encounter these constraints and see spiking winter prices again. 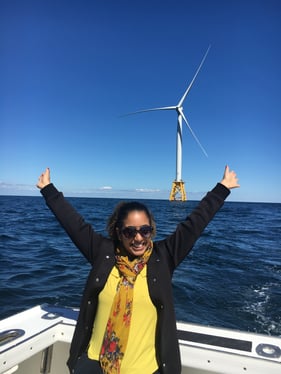 Offshore wind has a high wintertime capacity factor compared other types of renewables in New England—since it has been online, the 30-MW Block Island wind farm has achieved wintertime capacity factors of over 50 percent (Source: EIA 923 data, 2017-2019). Mayflower Wind and other larger wind farms are proposed to be built in areas with even better wintertime wind resources. Having hundreds or thousands of megawatts of offshore wind online would decrease the likelihood of encountering high winter prices. Once they are built, offshore wind farms produce electricity for free, unlike natural gas plants. That means that they lower the price of buying wholesale electricity for the entire grid. We call this phenomenon price suppression, and it’s a benefit also achieved by onshore wind, solar, and energy efficiency. Finally, offshore wind, like other renewables, has the benefit of producing zero-emissions electricity. If all 2,300 MW of the contracted offshore wind farms were online in 2018, they would have reduced electric sector greenhouse gas emissions by over 3 million metric tons—roughly equivalent to New England getting zero-emissions electricity for two full months of the year.

Other than Mayflower, there are quite a few offshore wind projects under development on the East Coast. Here’s a table showing their pricing and expected dates of operation. Mayflower is the lowest so far, but Vineyard Wind and Revolution Wind are not much higher.

The takeaway from all this is that renewable energy is becoming more affordable all the time. Keep this in mind when someone suggests otherwise. And because the potential exists for a lot more off-shore wind than the projects listed above, now would be a good time to increase the renewable energy standards in Massachusetts and Rhode Island.

And now would also be a good time for your community to adopt the Green Municipal Aggregation model that has emerged as another key driver of renewable energy demand.