Communities are demanding more renewable energy—and they're getting it.

We take great pride in the fact that we, along with a company called Good Energy, took the model of municipal aggregation (a.k.a. community choice energy) and made it truly green. We did so with our pioneer partners, the City of Melrose and the town of Dedham. In 2016, those communities used the buying power of their residents to secure an affordable electricity rate that includes more local renewable energy than required by state law. Since then, over a dozen communities have joined the movement and added more renewable energy to residents' electricity supply - most recently Medford, Bedford, and Rockland. Green Energy Consumers is proud to be providing that additional incremental amount of renewable energy.

Pretty soon, the majority of residents and small businesses in Massachusetts will be served by municipal aggregation programs. Large businesses can participate too, but they tend to choose their own electricity supplier. This is a tremendous shift. Until recently, most small customers were served by what the regulated utilities call “Basic Service” or by competitive power suppliers.  The problem with Basic Service is that utilities are only required to include a fixed amount of renewable energy by state law, and they are regulated to bid on electricity supply price at certain times, rather than bidding when conditions are favorable. That affects both the price and the content of Basic Service.

Competitive power suppliers are not limited to the amount of renewable energy they can have in their mix, and can bid on favorable electricity prices. The problem with them is that they have been shown to greenwash and rip-off consumers at the individual level. With aggregation, communities use the buying power of all residents to get a good price through a competitive supplier - and they get to call the shots to protect consumers. Still, consumers have the right to stay on Basic Service or to choose another supplier without penalty.

Melrose and Dedham were the first to try out Green Municipal Aggregation, and due to its success were quickly followed by Arlington, Bedford, Brookline, Gloucester, Hamilton, Rockland, Somerville, Stoneham, Sudbury, and Winchester.  The City of Medford is going online in December. Bedford and Rockland will follow, and we have many communities in our pipeline.

Medford, Rockland, and Bedford will be honored for their aggregation programs at our upcoming Fall Meeting on November 19th. RSVP.

There are lots of other communities in Massachusetts with various shades of aggregation, not just the ones served by Good Energy and Green Energy Consumers. Below is a map showing, to the best of our knowledge, where communities stand now and where they are expected to be within a couple of years.

For communities we do not serve, we are making educated guesses about their aggregation’s renewable energy content based on the size of the community and information on their program websites.  If you know that something on our map is incorrect, please let us know.

Note that we are only counting what we believe to be demand for “Class I” Renewable Energy Certificates (RECs), which we are convinced is the proper standard for New England. One REC represents 1,000 kilowatt-hours that a wind or solar generator produces. Generators sell these RECs to electricity suppliers that are required by law to include a certain amount of renewable energy in their mix, and to consumers (or communities) that voluntarily purchase them. The buyer of the REC gets to claim that they are purchasing renewable energy and reducing their carbon footprint. Some communities have fallen into the trap of purchasing RECs that are far less impactful than Massachusetts Class I because of the dynamics of supply and demand where they are generated. If your community is buying cheap Texas wind RECs from a project that would be up and running regardless of whether or not you pay Bubba, we’re not giving you credit for reducing emissions. By and large, with RECs, you get what you pay for. (You can learn more about this here on our website.)

We took our knowledge of the communities we serve, the guesses about the communities we do not serve, and estimates of when all those communities listed as “in progress” in the map above will go into operation and did some math.  According to our analysis, by the end of 2021 or so, aggregation programs in Massachusetts will add well over 500,000 megawatt-hours per year of demand for Class I renewable energy. That’s truly remarkable!

For some perspective, that’s enough power to meet the needs of over 100,000 homes.

To put it yet another way, a good-sized, well-sited wind turbine can generate about 3500 megawatt-hours per year, so aggregation is supporting the equivalent of about 200 such wind turbines. 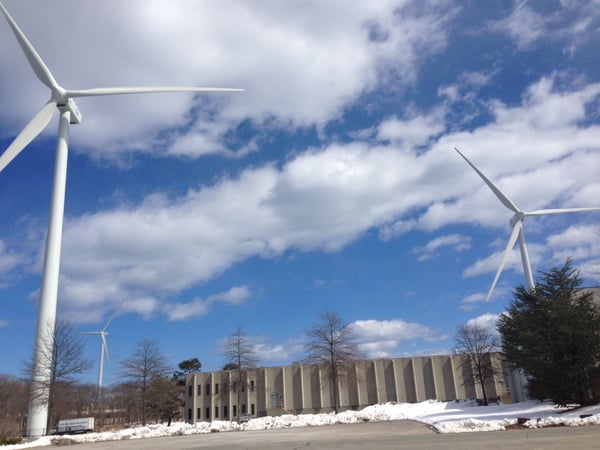 On top of that, thousands of households and businesses have voluntarily made the switch to renewable energy through our Green Powered program. Our biggest customers are Mass Audubon, the Conservation Law Foundation, and the American Meteorological Association.

We should also note that the town of Concord, which has its own municipal utility, has committed to zero-emission electricity by 2030 and will be ramping up its purchases of Class I RECs.  Municipal utilities are exempt from the Renewable Portfolio Standard that applies to National Grid, Eversource, Unitil, and competitive electricity suppliers. That’s a policy mistake that the legislature should fix, but we should give Concord credit for what it is procuring beyond what the Renewable Portfolio Standard would have required.

In 2019, the Mass. Renewable Portfolio Standard obligates electricity suppliers to purchase about 6.7 million RECs. Therefore, we are seeing the possibility that the voluntary market in Massachusetts will create about ten percent of the overall demand for renewable energy. This is meaningful.

Another point is that many of the aggregations we serve have expressed a preference to buy RECs from what they deem to be the best eligible sources – such as wind, solar, anaerobic digestion, and low-impact hydro.  Class I has a broader definition, but communities can exercise discretion. They have also expressed preference for projects that are local.  Companies needing Class I RECs can technically buy from projects located in New York and Canada. But we prefer projects close to home. Think of it this way: you can go to the grocery store and buy tomatoes from anywhere. Or you can buy better tasting, organic tomatoes from a nearby farm.

To top it all off, the best tomatoes don’t always cost more. In fact, many of the aggregations are saving their customers money compared to utility Basic Service and the rip-offs in the market brought by competitive power suppliers. Municipal aggregation is the solution to the problem that Mass. Attorney General Maura Healey uncovered with her study of competitive suppliers.

The environmental and economic benefits are tangible and significant, but are intangibly enhanced in a big way when you consider how people in so many cities and towns are engaging in the necessary discussions about where their energy should come from.  The civic participation that comes out of this is as powerful as the electrons.

By itself, the aggregation model is not enough to end the climate crisis.  But it’s a success story that we can build on.  We can ratchet up the state mandate. Communities can up their ante.  Individual consumers can opt-up to 100 percent renewable energy.  And we can use less energy, period.

We can do this.

Massachusetts is not the only the game in aggregation. Several communities in Rhode Island will also be making the community energy choice.  Central Falls, Providence, and South Kingstown have all passed resolutions.

Stay tuned for more information and a map showing progress. New Hampshire recently passed legislation enabling municipal aggregation, so we can anticipate that the model will continue spreading.  The New England power grid will be getting greener as a result.

Join us at our Fall Meeting to hear from Energy Leadership Awardees Medford, Rockland, and Bedford on their aggregation programs. RSVP.

Tags: Electricity and the grid, Green municipal aggregation, Our programs