The average home uses electricity all day long and most of us don’t even think about it. You may have heard that you can use your energy dollar to demand 100% clean renewable electricity instead of your utility’s dirty resource mix. Programs aimed at helping you green up the grid are numerous in this country, but many don’t deliver the intended results. However, in Massachusetts and Rhode Island, there is one way to ensure that your green power payments are making a difference:  by purchasing Class I or “new” Renewable Energy Certificates (RECs).

The subject matter in this blog is still relevant in 2019, but for a more current blog on the same topic, click here.

When you use electricity, you are pulling electrons from the New England regional power grid through the wires in your home to turn on your electronic devices. The power grid accepts these electrons from power generators across New England: wind turbines, natural gas facilities, hydro plants, nuclear and more. Once an electron leaves its generator and enters the power grid it moves according to physics to the closest transmission station or electricity user at that moment. Put differently, the regional power grid is like a big lake with streams feeding into it (generators) and streams draining out of it (electricity users).

You can never know which generator produced the exact electron that turns on the light in your living room. That’s where Renewable Energy Certificates (RECs) come in.

If you want to specifically consume renewable energy, you have to purchase one REC for every MWh you consume.

A REC can only be purchased from the database once. A MWh is only generated once and a consumer can only claim it once. Therefore, there must be no double counting of RECs, and if more consumers want to buy RECs, more renewable energy must be created. That’s the whole point!

Who buys RECs? Why do it?

Anyone! If you want to use renewable energy, you’re buying RECs. Many socially responsible corporations, businesses, and nonprofits buy RECs to match their electricity usage as a climate change mitigation measure. Individuals can do the same in order to reduce their personal carbon footprints. However when it comes to actually displacing fossil fuels from the grid, the type of REC in your green power product matters.

In Massachusetts, RECs are separated into Classes based on specific criteria in the state’s Renewable Energy Portfolio Standard (RPS). As of 2016, the RPS mandates that all electricity suppliers (this includes utilities) must source 11% of their electric load from renewable generators built after 1997 via purchasing "Class I" RECs. The amount of Class I renewable energy required goes up by 1% every year. The result? All MA electricity consumers are getting 11% Class I renewable energy in 2016. They will get 12% in 2017 and 1% more per year thereafter.

Because Class I RECs are part of this “compliance market,” more and more renewable energy generators need to come online in New England in order for suppliers to comply with this mandate over time. If the RPS continues to expand renewable energy supply at its current rate of 1% per year, we will be at 100% renewable in 2105. But that’s clearly not fast enough in the face of climate change. And that’s where the voluntary REC market comes in.

In Rhode Island, the same kind of local, post-1997 RECs are designated “new” by the state’s Renewable Energy Standard (RES). This law is very similar to MA’s RPS, except that right now electricity suppliers must source 8% of their electric load from “new” projects and the amount required goes up 1.5% every year until 2035, where it will remain at 38.5% unless and until the law is changed. However, despite slight differences in the law, “Class 1” and “new” RECs are two names for the same thing. This article will refer to them as Class I RECs below, but the same applies for RI “new” RECs.

Buyer Beware: Not all RECs Have the Same Impact

There is a lot of renewable energy that would get produced whether or not someone bought the REC.

In places like New England, where land value makes it expensive to build new facilities, REC sales provide an essential revenue stream for renewable energy developers. Each REC has a price. The price is the additional amount needed per MWh by the renewable energy generator to make post-1997 projects financially feasible. By mandating this type of renewable energy, the law is ensuring increased renewable energy supply in a space where supply would not get built without a mandate.

In places like Texas or Pennsylvania, huge renewable energy projects can be built for less. It’s an economy of scale; 100 wind turbines in a project are cheaper per turbine than a project with 1 or 2. Because of the low cost to build the project and other renewable incentives, revenue from RECs are not necessary for project feasibility in these places. Additionally, these areas tend to have weak RPS mandates because actual supply has surpassed mandated supply and the law was not revised to keep up. As a result, there is no compliance market to drive new supply above and beyond what would normally get developed and the RECs have rendered the voluntary market for RECs ineffective. It’s not that the Texas wind project is ineffective, it’s that any REC sales from such projects are just gravy to a developer and not consequential to the project economics.

It’s a similar story for very old renewable energy generators, like New England hydro. These projects are relatively inexpensive to build (compared to output) and they have a very long lifespan; many facilities in New England are close to 100 years old. These projects have been financed, so their electricity sales alone are sufficient to cover normal operation. Again, REC sales are just gravy.  And because there is no state mandate for these projects, buying RECs from them does not result in new supply. 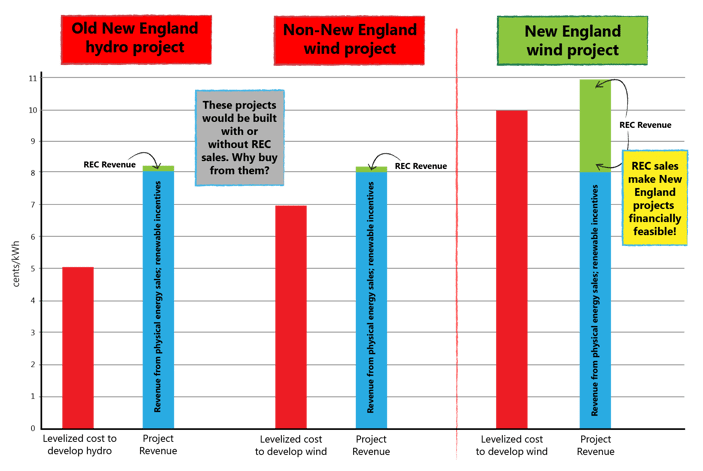 Buy New England Class I RECs to Shift the Grid

Non-Class I projects still produce RECs, and though they are worth only a fraction of a penny, these RECs are sold because… why not? When utilities don’t buy them, many “green” competitive suppliers, like Viridian or North American Power, will purchase and re-sell these pointless RECs to New Englanders as a miracle renewable energy product that is cheaper than normal electricity. This is greenwashing. If you live in Massachusetts or Rhode Island, purchasing a REC from a huge farm in Texas is not shifting our grid away from fossil fuels, it is not shifting Texas’s grid away from fossil fuels, it does absolutely nothing. Your time and money would be infinitely better spent advocating for a stronger RPS or RES in these areas.

We determined Class I RECs to be the most effective way to fulfill our mission, so that’s what our programs supply. Simple.

So here’s the moral of this story: make the switch in a way that matters by buying Class I or “new.” Green Energy Consumers designed our nonprofit green power programs to bring new generation onto the grid as the primary objective. In consultation with many environmental organizations like Mass Audubon and Clean Water Action, we determined Class I RECs to be the most effective way to fulfill our mission, so that’s what our programs supply. Simple.

And we aren’t the only ones who think so:

Stopping climate change will never be simple, but many decisions you make can be part of the puzzle. Using your energy dollar to vote for clean electricity generation is about as simple as it gets. Be part of the solution, make the switch to Class I renewable energy.

You can join the movement and start matching your home or businesses electricity usage with Class I RECs. It only takes 5 minutes: