Since 1997, Massachusetts state law allows a city or town to choose the electricity supplier for residents and businesses within that municipality. This is called municipal aggregation or community electricity aggregation (CEA). It’s a model that allows for important energy decisions to be made at the local level rather than by an investor-owned utility or by a for-profit competitive electricity supplier. The oldest and largest example of municipal aggregation in Massachusetts is the Cape Light Compact, which buys electricity and runs energy efficiency programs for all the towns on Cape Cod plus Martha’s Vineyard.

In the last several months, while we have seen electricity rates charged by Eversource and National Grid spike, we have seen a number of communities investigate the municipal aggregation option as a way to deliver cost savings to residents and small businesses. Generally, large commercial and industrial customers are able to procure electricity on their own. An important feature of the law is that the community can choose an electricity supplier to serve ratepayers in the town, but individual residents and businesses are given a clear opportunity to opt-out.

Community choice also allows cities and towns to go greener than required by state law. Mass Energy is pleased to be working with the leading national community electricity aggregation consultant, Good Energy. Their job is to provide consulting support to communities and help them select, through a competitive bidding process, an electricity supplier. Good Energy will work with communities to develop and manage a municipal aggregation plan.  This includes a tailored public awareness campaign as well as managing the DOER and DPU approval process.  Good Energy has partnered with Mass Energy to bundle Mass Energy’s MA Class I RECS with the chosen electricity supplier to provide five percent (5%) more green power than required by the state’s Renewable Portfolio Standard (RPS).

As we wrote in a previous blog on the RPS, 10% of our energy is supposed to come from qualifying “Class I renewables”, plus another 1% per year after that. By 2020 we will reach 15%, 20% in 2025, 25% in 2030, and by 2050 utilities will be required to generate approximately 45% of their energy through renewable resources.  Sounds great, but it’s too slow to meet the challenge we face from global warming. The extra 5% alone may not solve the climate problem, but it is a significant enhancement both objectively and symbolically. It would put a community five years ahead of its neighbors. Across an entire city or town, it would create demand for wind turbines and other renewable energy projects to be built. And it would send a message to policymakers – the state’s RPS is a great idea, but the current schedule is too slow.

A Case Study: The City of Melrose

The city of Melrose has taken a leadership position on this model and is currently moving forward with Good Energy. The mayor and city council have approved a plan that is now being reviewed by the Mass. Department of Energy Resources and will be reviewed by the Attorney General’s office and Department of Public Utilities. Once the approvals are received, the plan is for Good Energy to put out a Request for Bid, asking major electricity companies to bid on the community’s supply contract. Melrose will have the right to discard any and all bids. As stated, the bids would provide electricity meeting the Renewable Portfolio Standard plus an additional five percent green power to be supplied by Mass Energy from projects based right in here in Massachusetts – not Texas, not New York.  This schematic shows how the relationships would work. 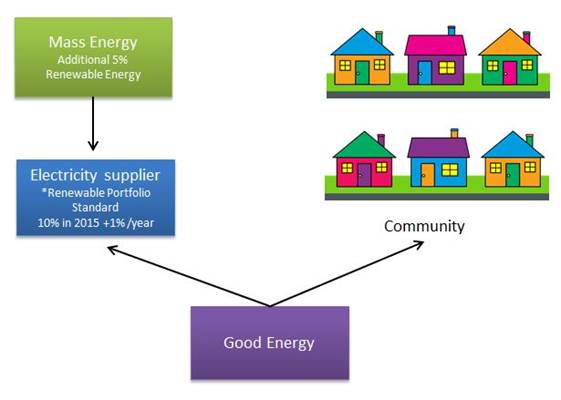 We estimate that adding 5% Class I renewables into the mix would add about $15-20 per year to the average residential bill. That’s about a nickel per day. The plan in Melrose would allow participating customers to have five options.  Customers would receive the additional 5% MA Class 1 REC as the Melrose standard offer but alternatively could elect to just buy power that only meets the state’s RPS, the Utility's basic supply service, another competitive suppliers product or they could buy 100% green power from Mass Energy[1]. Community choice plus consumer choice equals fairness and progress! 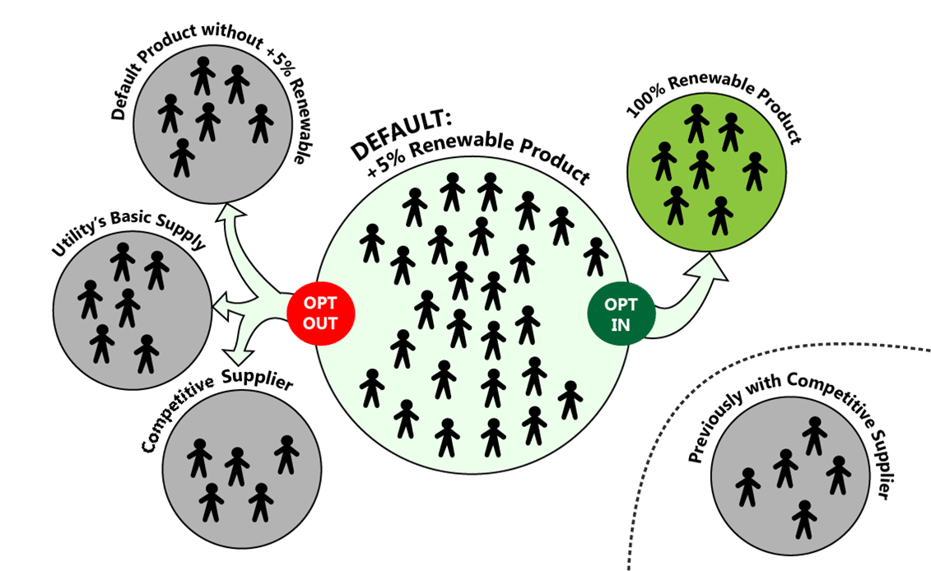 If enough communities follow the good lead of Melrose, more clean energy projects are going to have be built in response. It takes time for new projects to get online, so some communities that decide to do green municipal aggregation may have to be patient and sign contracts for projects under development.  But such patience will produce the desired effect, resulting in a much cleaner energy mix, as illustrated here:

Buyer beware: Not all green power is created equally

Some communities in Massachusetts are rolling out municipal aggregations claiming to be 100% renewable.  But a closer look at the details reveals some greenwashing.

In the world of renewable energy, some types of projects actually displace fossil fuels and some do not. We explained this in another recent blog. To be clear, what Melrose is doing with Good Energy and Mass Energy is all about the “right” kind of green power, which is based upon facilities that qualify for the Massachusetts Class I Renewable Portfolio Standard.

Soon enough, Melrose is going to be five years ahead of every other town in the Commonwealth.  Hats off to them!

Is your community ready to step up next? Leave a comment and let us know...

Sound interesting? Get even more info by watching a recording of our "Green Municipal Aggregation Webinar" given by Mass Energy's Executive Director, Larry Chretien. You can download the presentation slides here.

[1] Readers – you can Make the Switch to 100% green power right now: www.MassEnergy.org/Green