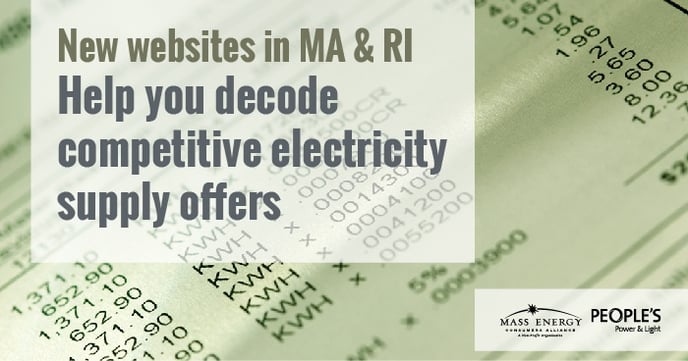 One of our members called recently asking for help finding information on competitive electric suppliers, the electricity supply companies that often claim to offer cheaper rates – and sometimes greener power – than the Basic Service offered by her electric utilitiy. More than likely, you’ve also received a knock on the door or something in the mail from competitive suppliers. So many suppliers had contacted our member that she felt she should find out what they were offering. She was particularly interested in renewable electricity options, but didn’t know who to trust.

Before you buy, beware greenwashing

If you’re looking at competitive suppliers for the purpose of going green, you’re unlikely to find something meaningful. This is because it is unusual to find a competitive supplier offering renewable energy from New England above what is required by state law. That’s why, if you’re interested in going green, we recommend looking at our locally based green power program instead.

If you buy green power, you’re buying Renewable Energy Certificates (RECs). In order to add new renewable energy to the grid through your purchase (a phenomenon called “additionality”), you must buy voluntary “Class 1” (MA) or “new” (RI) renewable energy. This type of renewable energy comes from projects that have been constructed since 1998 and are located within the New England power grid region. This distinction is important because not all REC purchases effectively support the creation of new renewable projects, like Class I or new RECs do. Renewable projects that are not new don’t need the profit from REC sales to be financially feasible, so REC purchasing from these projects don’t actually replace any electricity being generated locally by dirty and unsafe resources on our power grid.

The MA law requires electricity suppliers to supply at least 12% Class 1 RECs as part of their standard electricity offering in 2017, while the RI law requires 11.5% in 2017. So, if a supplier claims they sell Class 1 RECs but only offer those percentages, there is nothing special about that — because of state law, Eversource and National Grid offer the same percentages.

Read more about the importance of Class 1 RECs.

What to look for when shopping

Basic Service rates change every 6 months, so even if a competitive supplier looks good by comparison at a certain point in time, the savings may not last.

Competitive electricity supply is definitely a “buyer beware” situation! Mass Energy/People’s Power & Light has done cost-comparison research and finds that the average customer of a competitive supplier typically breaks even compared with the utility's Basic Service price over a few years. Basic Service rates change every 6 months, so even if a competitive supplier looks good by comparison at a certain point in time, the savings may not last.

Additionally, when your contract term with a supplier is up, you may be switched to a different fixed rate or be put on the supplier’s variable rate—both of which may compare less favorably to the Basic Service price. It’s important to be informed about the end-of-contract terms with your chosen supplier.

Competitive supplier pricing can greatly benefit large electricity users, such as corporations and municipalities, rather than individual households. However, if you feel it is right for you, here are the top three things to look for when choosing a competitive supplier:

If you’re shopping on price alone, there are helpful new sites in both MA & RI:

Once you click on “home” for residential information, and click on the name of your electric utility, you’re taken to a chart showing the Basic Service rate offered by your utility plus current competitive offers (note: supplier participation is optional, so you may not see every company you’ve encountered here. However, all suppliers go through a licensing process with the DPU, regardless of participation in the website). You’ll see columns for both the cost per kilowatt-hour and a projected cost per month, based on the average usage rate. Additionally, the site offers important information on the contract term, whether there is a cost for early cancellation, and whether the contract will automatically renew — three very important factors that everyone should consider when switching to a competitive electricity supply service

The site has a column of information about renewable content and, most usefully, a new option, that is a little hard to notice, called “Filtering options.”

The website is hip to additionality and calls Class 1 resources “new regional resources." Do the suppliers listed pass the additionality test? (see higher up in this blog for definition of additionality)

There were 5 competitive suppliers that offer “100% renewables” in Eversource territory, but none that offer voluntary new regional resources above the resources required by state law.

When we took a look, there were 5 competitive suppliers that offer “100% renewables” in Eversource territory, but none that offer voluntary new regional resources above the resources required by state law. It’s a similar story for the other utilities: a handful of 100% renewables but not any that offer new, local options. If you want to go green, we don’t recommend using an out-of-state supplier. Mass Energy is not a competitive supplier, but we offer green electricity options that can be added to your utility bill. Our program provides you with Class 1 renewable energy generated within Massachusetts and Rhode Island.

Start by clicking “Home” on the main page of the Empower RI website. Then, enter your average monthly kWh usage and click “Update” on the right hand side to see what kind of rate a competitive supplier may charge you. 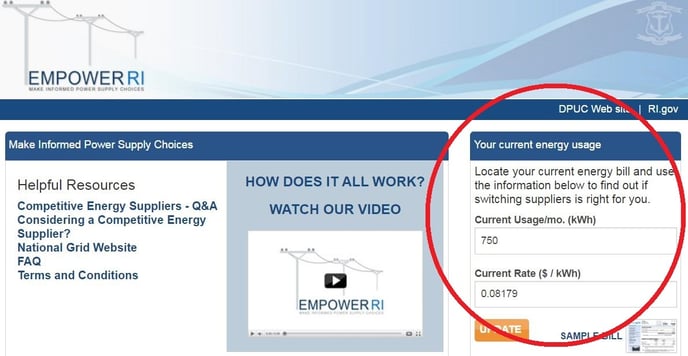 Scroll down to compare the monthly rates and see the additional cost or savings with each company. Click “Plan Details” to see if there is a termination charge, a lock-in rate, and the length of a program’s contract.

BUYER BEWARE! Rhode Island’s website is not sensitive to additionality. The current Empower RI page is misleading regarding renewable energy content. It says various plans exceed the state Renewable Energy Standards, but each fails to procure new New England RECs. As mentioned earlier, cheap non-New England RECs do not change our local energy mix or reduce polluting emissions by financing new renewable energy sources. It’s not worth paying extra for greenwashing. Always ask to see a disclosure label from a supplier to know specifically where that green power is being sourced.

People’s Power & Light is following up with the Division of Public Utilities to have the incorrect renewable energy label rectified.

The bottom line on green electricity

We strongly encourage you to avoid any competitive supplier that doesn’t specifically supply voluntary/additional “new” or “Class 1” RECs, and we’re joined in this opinion by many other local and national environmental and health organizations

While none of the competitive suppliers that we have encountered so far have met this criteria, Mass Energy/PP&L gives you an easy way to match your electricity use with safe, clean, new (or “Class 1”) power generated here in New England by wind and other renewable projects.

Note for National Grid customers: If you sign-up with a competitive supplier in National Grid territory (“green” or not), you are unable to participate in Mass Energy/PP&L’s green power programs. So if you want to be truly green, stick with Basic Service and sign up for green power today!

If you have National Grid Basic Service, you can support local new renewables generation with Mass Energy/PP&L right on your bill through the “Green Up” program.

In the other utility territories like Eversource (MA only), you can sign up for Mass Energy’s New England GreenStart or New England Wind and know that your financial support is supporting clean and safe power installations in a community near you.

One final note:  what we’ve been talking about in this blog is for individual residential or small business consumers looking to pay a fair price for greener electricity. For larger consumers, like municipalities, there’s another model involving competitive suppliers that has a better track record of savings and additionality. It’s called  Community Choice Aggregation (or Green Municipal Aggregation). Mass Energy helped develop a model that adds 5% more local (Class 1) renewable energy to the electricity supply for all residents on Basic Service—all while securing a competitive price for everyone. It’s a win for consumers and the environment, and has been put into practice by two pioneer communities in the Greater Boston area. Read more about it here.