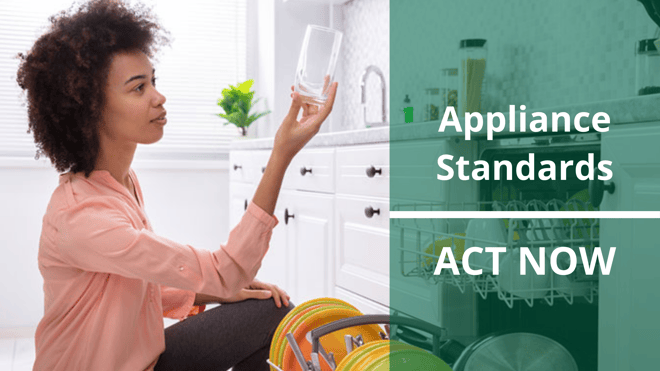 This week, after about four months of lower-than-usual demand due to the coronavirus pandemic, demand is climbing to normal hot weather levels—enough to cause a potentially expensive and polluting peak day.

On peak days, we remind New Englanders to turn up the thermostat, turn off lights, and delay charging devices or electric vehicles—all to attempt to lower the peak electricity usage of the day and avoid turning on dirty power plants. But efficiency and conservation are important year round—in fact, as we have written many times, energy efficiency is one of the most powerful tools we have to reduce emissions and save consumers money.

What if there were a simple, free policy that would save money, water, and energy year round, all without any effort from consumers or any impact on the economy? This magical policy exists, and it’s called appliance standards! In the coming weeks, we need your help to update appliance standards in Massachusetts.

Energy efficient appliance standards are “the mightiest energy saver you’ve never heard of.” This unsung policy hero works under the radar to save energy. By requiring a minimum level of natural gas, electricity, and/or water efficiency in appliances sold to consumers, appliance standards ensure that the least energy efficient products don’t end up in your home. Because the efficient alternatives are often less expensive or only slightly more expensive than inefficient energy hogs, consumers quickly reap the financial benefits on their energy bills.

Unfortunately, appliance standards—although they are a win-win policy for the environment and consumers—are facing major rollbacks under the current administration. Light bulb standards that had been scheduled to come into effect were blocked in 2019 by Trump’s Department of Energy. In 2020, the administration is moving forward with rollbacks on standards for dishwashers, gas furnaces, and more.

Luckily, states have the opportunity to set their own standards for products that aren’t covered federally, like faucets, computers, restaurant equipment, and more. California, Washington, Vermont, Colorado, and other states have adopted new appliance standards in the past couple years. Massachusetts and Rhode Island are now behind on updating their standards.

For a full round up of the benefits of the proposed appliance standards bills in Massachusetts and Rhode Island, check out this fact sheet from the sponsor, Rep. Josh Cutler (note: the list of products in the bill has changed slightly since this fact sheet was drafted, so some of the numbers have changed).

As the legislative session races to a close in Massachusetts (likely by early August), appliance standards (H4551) is a bill that is ready to get over the finish line. The standards passed the Senate back in January as part of a larger green package. Now, the bill is waiting to be reported out of the Ways and Means Committee so that it can come to a vote before the full House of Representatives.

The best part? The House already voted to enact these standards at the end of the last legislative session two years ago, although the standards didn’t make it out of final negotiations between the House and the Senate. This indicates that the legislators already support the bill.

Everyone wants appliance standards. It’s up to the House Speaker to bring it to a floor vote so we can finally have this policy that cuts emissions and save consumers money.

If you are a Massachusetts resident, you can help us pass appliance standards by calling or emailing your legislator and urging them to help get this bill to a floor vote. If there’s one good energy bill that can and should make it to a floor vote, it’s this one.

Rhode Island’s legislative session whimpered to a halt in the midst of the pandemic over the last month. With Committees not meeting and legislators attending to their day jobs and other priorities, barely any bills passed; all remaining attention went towards closing the huge budget deficit created by the pandemic. This means that, for the third year in a row, the Rhode Island General Assembly failed to pass meaningful climate and energy legislation, even a policy as straightforward as appliance standards.

Three Ways You Can Make A Difference