Shave the Peak in the Era of COVID: Summer is Coming 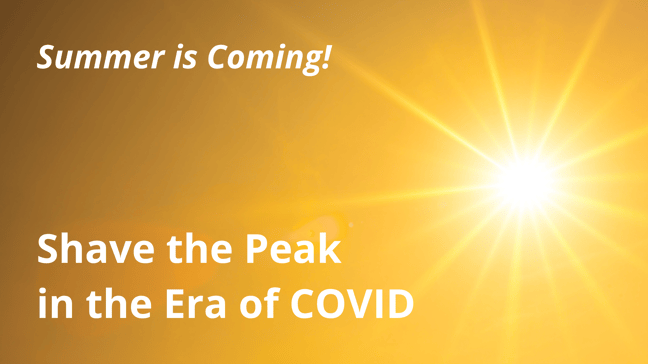 Last month, we covered some of the impacts that COVID-19 and the resulting stay-at-home orders have had on our electric grid. This month, the pandemic has continued to drive low electricity demand and record low electricity prices. Even better, low demand and higher than ever solar production has led to a greener grid. But as temperatures rise and stay-at-home orders relax this summer, can we expect low demand, prices, and emissions to continue?

Here in New England, we’re all on one electric grid that is managed by a regional grid operator, ISO-New England. We can use the data available through ISO-NE to get more insight into what’s going on in our electric system. Last month’s blog about the COVID-19 Recession reflected on changes we saw in March and April. This month, we’ll discuss what we observed in May and the first couple of weeks in June.

Solar driving low demand in May

As one would expect, electricity demand is down overall during the pandemic. However, residential electricity load has actually increased as more folks work from home. But the shutting down of many commercial and industrial buildings has resulted in an overall reduction in demand by at least 5% across the region. In other words, the increase in residential demand was more than offset by the decrease in business demand.

Shave the Peak has taught us that reductions in demand lead to reductions in average electricity wholesale prices and average greenhouse gas emissions per unit of electricity. And we have seen that play out in March, April, and May. In ordinary times, the comfortable temperatures we enjoy in the spring lead to an electric grid that already has low demand, low emissions, and low prices. But the pandemic-caused recession during these months has led to even lower wholesale electricity prices, as well as several days where a substantial portion (over 50% in some hours) of energy was produced by fossil-fuel-free resources, like nuclear, solar, and hydro.

In May, stay-at-home orders continued (although they relaxed in some states towards the end) and that was a big factor in restraining demand. Another factor has been record-breaking solar production. “Front of the meter” solar (i.e., the very large solar projects that connect directly to the electric grid) production was 50% higher than in April 2020 and nearly triple the production we saw in May 2019. This incredible jump may be attributed in part to clear, sunny weather but more so due to the construction of new solar projects over the past year.

This jump in solar production is even more impressive when we add the record-breaking amount of solar that is being produced “behind the meter”, mostly on rooftops. For example, on May 2, 2020, behind the meter fed 3,200 MW of power into the grid. That’s a lot of electricity on a day when peak demand is just 11,500 MW!

All of this rooftop solar shows up in ISO data as reduced demand during the middle of the day, because it lowers the amount of power drawn by the buildings themselves. This creates what we call a “duck curve,” where the demand curve is lower in the middle of the day, when the sun is shining, than it is in the morning and evening.

The impact of solar demand in addition to continued stay-at-home orders, is a big reason why May’s demand dropped compared to prior months as shown in the table below for Rhode Island and for Northeastern Massachusetts (NEMA), which includes Greater Boston.

While total electricity usage is down in both regions, off peak usage has gone up. We do not have data from ISO-NE indicating how much of May’s usage was residential versus commercial and industrial. But we know from experience that the uptick in residential electricity use is causing the shift from peak to off-peak.

Green Energy Consumers supplies renewable energy to several communities that have adopted Green Municipal Aggregation. And for those communities, we do have a breakdown between residential and business usage. In May 2020, we saw an 18% increase in residential electricity use while commercial use went down due to the fact that the load of our GMA communities is, on average, three-quarters residential and one-quarter commercial.

Low wholesale electricity prices in New England continued throughout May. As we saw last month, these low prices are driven by low demand, the growth of cheap renewables (solar in May!), and, perhaps most significantly, low prices for fuels like gas and oil globally. In April 2019, the average wholesale price per MWh of electricity was $27.12. In April 2020, that fell 33% to $18. According to ISO-NE, this is the lowest average April wholesale electricity price since the current energy markets were developed—and the third lowest overall.

This drop in price demonstrates the power of reducing demand on saving money for consumers. However, as a reminder, although wholesale electricity prices have an impact on your electricity bill, the price of generation is a relatively small component of your bill. Most of the bill goes towards maintenance of the poles and wires that deliver electricity. Further, you won’t see the impact of low fuel prices for months or even years as it evens out in utility rate cases.

As will come as no surprise given the record breaking levels of solar production throughout May, May was likely one of the lowest greenhouse gas emitting months on record. The low demand and behind-the-meter solar was a large contributor to low emissions; in addition, front-of-the-meter solar jumped up. These factors were able to balance out the continued lower-than-usual production of nuclear generators (as we saw in April, some nuclear power plants went offline for refueling or unplanned safety shutdowns), as well as less wind and hydro than we saw in April.

Of course, we still have a long way to go before we meet our regional clean electricity goals, like the Rhode Island Governor’s 100% renewable electricity by 2030 Executive Order. However, months like May demonstrate that we have the strategies we need to supply affordable renewable electricity to New England: build more renewable energy, including both solar and wind, invest in efficiency and conservation to keep demand low, and implement policies like the Renewable Energy Standard.

Demand looks like it may climb back up. In addition, ISO New England reported on June 18 that, as the regional economy gets back up and running and states reopen, demand is returning to normal levels. The week of June 8th saw demand just 0.6% less than one might expect without the pandemic. This week, as temperatures rise above 85 across the region, grid operators are forecasting daily demand peaks above 20,000 MW.

Although this is high (and certainly significantly higher than we’ve seen since stay-at-home orders began), it’s still a ways away from the threshold we’d usually call a summer peak. Of course, there’s never a bad time to conserve energy! So double check that lights are off and electric vehicles are plugged in at night, off-peak.

It remains to be seen whether continued working from home and business closures, as well as a general economic recession and high solar production, will keep demand low enough this summer to avoid summer peaks altogether. Stay tuned—and make sure you’re signed up for Shave the Peak so that we can alert you to a peak day if we have one.