Where's the peak in the era of COVID? 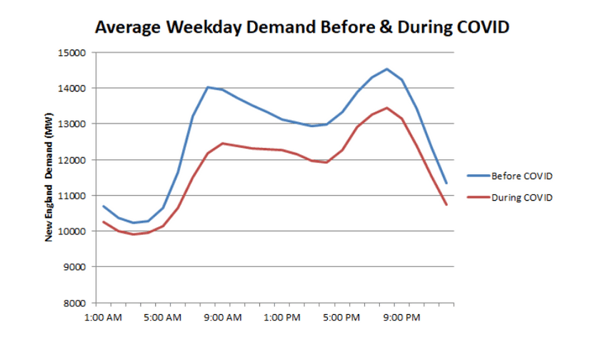 Over the past two months, the world’s daily patterns have changed drastically. As we know from Shave the Peak, even small changes to routines, especially during peak hours, can have an outsize impact on the emissions, costs, and fuel mix of our electricity system. So it’s no surprise to see that the pandemic and the subsequent stay-at-home orders have shifted many aspects of the electricity mix, here in New England and beyond. In fact, the average cost of electricity during March was the lowest in market history, in large part because of the pandemic.

So what’s going on in our electricity mix, and why? And perhaps most importantly, what lessons from the pandemic’s impact on the electric system should we be taking into the future?

Here in Massachusetts and Rhode Island, we share an electricity grid with the rest of New England. The New England grid is operated by an entity called ISO-New England (we get most of our data from ISO-NE’s website—check it out for yourself!). ISO-NE keeps the electric system reliable by ensuring that there’s always as much electricity supply going into the grid from power plants and other generators as there is demand on the grid from energy consumers.

Under normal circumstances, electricity demand is pretty low this time of year (March, April, and May are called “shoulder months”): because temperatures are cool but not too cold, electric heating and cooling systems are not adding very much to total demand. Meanwhile, as days get sunnier and longer, solar is doing its part to supply buildings with energy rather than drawing on the grid. April tends to be the month with some of the lowest emissions: a significant portion of our electricity needs can be supplied by the region’s low carbon sources: nuclear power plants, hydro, and other renewables. Most of the rest of New England’s electricity during shoulder months comes from natural gas. We might see a negligible amount of coal or oil energy on particularly cold days or if something unusual is happening in the system.

In addition to low emissions, low demand leads to lower electricity prices when the supply remains the same, as any first-year economics student would expect.

The lower emissions and lower prices of electricity in the shoulder months is the reverse of the peak hours we talk about in Shaving the Peak. During hours of peak demand in the summer and winter, we see a spike in emissions and an extraordinary increase in wholesale electricity prices.

Impact of COVID-19 on demand

Over the past couple months, people have been spending more time at home. Meanwhile, many offices, restaurants, and other businesses are shuttered. That means more residential electricity demand but way less industrial and commercial demand. Here in New England, this change has added up to a 7.4% reduction in overall electricity usage in March (when accounting for weather) even though the stay-at-home orders weren’t issued until the end of the month, and about a 5% reduction in April (based on raw data and not accounting for weather). Synapse Energy Economics has estimated that actual reduction may be even higher.

The overall peak has remained about the same—the region’s electricity demand is peaking at around 8pm, the way it did during shoulder months last year and in early March. However, the overall load curve is “flatter”—that is, there’s less variation between night and midday, as daytime commercial uses do less to drive up demand. In addition, the difference is most pronounced in the morning, as people who are out of work or are working from home skip their usual rush hour routines. You can see this trend in the below graph of average weekday demand during the pandemic in March and April, when compared to average weekday demand in early March 2020 and in March and April 2019. The demand suppression effects of coronavirus are most notable in the morning and the afternoon, and the gap narrows at night. 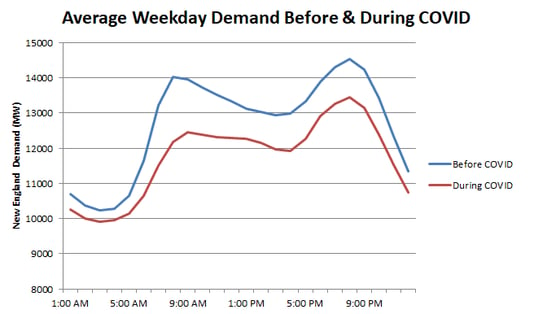 Of course, we know from Shave the Peak that extreme temperatures—either cold or hot—are one of the main drivers of electricity demand. But, even accounting for mild temperature variations in March and April, the pandemic has reduced demand more than can be accounted for by other factors.

Impact of COVID-19 on Price

As expected, with lower demand, electricity prices have dropped. The price drop is occurring in part because of the low demand within ISO-NE but an even greater factor is extremely low prices for natural gas and oil globally. This allows gas and oil power plants to supply electricity to the grid at much cheaper prices than usual. March’s real time electricity prices reached record lows, according to ISO-NE.

You may be asking—if electricity is so cheap right now, why aren’t my electricity bills lower? That’s because the electricity rates you receive from your utility are set in advance, and the wholesale real time cost of electricity supply (which is what we’re discussing in this blog) is only one portion of your bill. Although you may not see the impacts of low electricity prices in your bill this month, the current low cost of electricity has ripple effects that may reduce your bill later on.

Here at Green Energy Consumers, our main concern is reducing emissions. The pandemic has decreased the amount of natural gas-generated electricity dispatched to the grid by 3.7 million MWhs in March (when compared to March 2019) and by 1.5 million MWhs in April (compared to April 2019). Although this decrease is good for the climate, lowered electric demand could be doing even more to reduce emissions; in April, emissions reductions were somewhat offset by unexpected nuclear outage and cold temperatures.

In general, low carbon electricity generators—including renewables and nuclear power—are always supplying electricity to the grid. When it comes to wind, solar, hydro, or other renewable sources, that’s because their cost to run is minimal—if the sun is shining, wind is blowing, or water is falling, they’ll be feeding electricity into the grid. Similarly, nuclear power plants are so difficult to turn on and off that they are almost always running. On the other hand, natural gas, coal, and oil power plants only provide electricity to the grid when demand and electricity prices are high enough to warrant those fuels. So, we’d expect to see a lot less fossil fuels in the electricity mix when demand is low. And most of the time, that expectation is borne out.

However, the percentage of generation from fossil fuels is actually up when compared to March before coronavirus and when compared to March and April 2019. Although the pandemic has helped New England cut emissions slightly, that’s almost entirely due to a reduction in overall demand. We are not receiving the additional benefit of a higher percentage of low-carbon sources. What’s going on?

It turns out that, for a large part of April 2020, the region had access to a lot less of its main low-carbon energy source, nuclear, than it did last year. Natural gas generation has been making up all that lost nuclear power. The reduction is due to three factors: first, the Pilgrim Nuclear Power Station, which had a capacity of 690 MW, or about 5% of our April demand, retired last May, reducing New England’s overall nuclear capacity. Second, nuclear plant operators use low demand months to turn the plants off in a staggered fashion for their yearly “refueling,” so big power plants were temporarily unavailable in April. Third, while one plant was off for refueling, unexpected circuit fault tripped yet another offline. This resulted in nuclear running at just 25% of its full capacity for about ten days in the first half of April.

Going forward, we can expect nuclear production to be back up—not to its pre-Pilgrim levels, but close to 74% of its capacity as it currently is in early May. In addition, we have more renewable generation—especially from solar and wind—than ever before. In 2020 grid connected solar production almost doubled from 2019 due to an increase in capacity. Wind production was about the same in both months for both years. With nuclear running at full speed, sunny (but not too hot) weather, and lots of people working from home, May should bring low emissions and low demand. 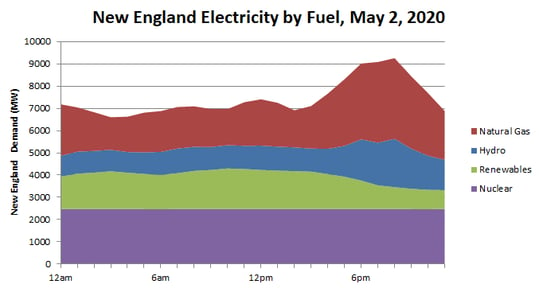 In fact, it already has. On Saturday, May 2nd, we saw a rare combination of wind, sun, and extremely low demand—enough to make renewables (not including hydro) a bigger percentage of the electricity mix than fossil fuels for a few points during the day, including at 10am and 2pm! Including hydro, renewables produced more than fossil fuels for the majority of the day.

Breaking it Down by Region & Time of Use

So far we have been reporting on New England as a whole.  But there are variances across the region. For example, here we show how April’s usage as compared to April 2019 breaks down overall, on peak and off peak for the state of Rhode Island and for Northeastern Massachusetts (NEMA), which includes Greater Boston. NEMA has a significant percent of commercial and industrial load.

While overall electricity usage has gone down, we are seeing differences between residential usage and commercial and industrial usage. Green Energy Consumers supplies renewable energy certificates (RECs) to communities that have adopted Green Municipal Aggregation.  Compared to last year, in March and April, residential usage has gone up about 7%, while commercial and industrial usage has gone down by about 6%. In the communities we serve that have a fairly large commercial presence, load has fallen more than the bedroom towns. This Covid-related effect consistent from other accounts that we have read from around the country.

It remains to be seen how this pandemic will fully affect electricity in Massachusetts, Rhode Island, and the rest of New England.  In May and June, will overall electricity demand continue to be lower, even as states are reopening, due to caution from the public against the virus? Will a “flatter” demand curve allow us to move away from fossil fuels? What will be the balance between low demand and an increase in renewable energy capacity? When will ratepayers see an effect on retail electricity prices? We will continue to monitor the pandemic and notify our readers of new trends and patterns.