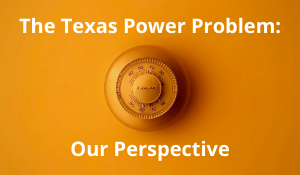 As a consumer-facing organization, our role is to boil down the wonky details to help consumers better understand where their energy comes from. In the face of a changing climate, this means transitioning to renewable energy in a way that increases the reliability and resiliency of the system. If you are interested in the technical details of what went down in the Lone Star state, there are good sources out there. But we will report some facts and rebut some “cow patties.”

A surprise from Mother Nature

This time of year, the highs in Dallas and Houston are supposed to be over 60 and the lows in the upper 40s. But they were seeing zeroes (Fahrenheit!!) for a few days, and Texas is not prepared for temperatures like that. This extreme cold increased the demand for heating, of course, and in Texas, they heat mostly with electric resistance (not heat pumps) and natural gas. And it’s our guess that the average home in Texas is not stuffed full of insulation either.

The cold temperatures caused a spike in electricity demand – way above the normal February for Texas. Unfortunately, it was so cold in Texas that every part of the energy supply chain froze up – literally.  Many natural gas-fired power plants were unable to operate because the natural gas production was slowed down. The wells froze. Pipelines froze. Coal and nuclear were affected too.

In a normal February, gas and coal produce about 80 percent of Texas’s electricity. Nuclear produces about 5 percent and wind power produces another 10 percent. In addition to impacting natural gas, coal, and nuclear, the cold weather caused some wind farms to underproduce, but overall, wind power has produced more than forecasted during the cold snap. Ultimately, the power system shortfall that caused so much damage in Texas this week came from about 30 gigawatts of gas- and coal-fired power plant capacity that became unavailable. (For scale: 30 GW is more than the peak demand for New England!)

And unfortunately, heating systems require electricity, leaving folks cold and in the dark.

Here’s a quote from Dan Woodfin, of the Energy Reliability Council of Texas (ERCOT), which runs the power system: “It appears that a lot of the generation that has gone offline today has been primarily due to issues on the natural gas system."

Woodfin also said that frozen wind turbines were the least significant factor contributing to the outages. The main problems, he said, were frozen instruments at gas, coal, and even nuclear power plants, as well as the decreased supply of gas to power plants.

In 2011, the state had a problem similar to this year. A major study from that year reported as follows: 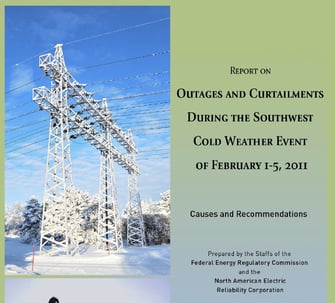 "Generators and natural gas producers suffered severe losses of capacity despite having received accurate forecasts of the storm. Entities in both categories report having winterization procedures in place. However, the poor performance of many of these generating units and wells suggests that these procedures were either inadequate or were not adequately followed.

The experiences of 1989 are instructive, particularly on the electric side. In that year, as in 2011, cold weather caused many generators to trip, derate, or fail to start. The PUCT investigated the occurrence and issued a number of recommendations aimed at improving winterization on the part of the generators. These recommendations were not mandatory, and over the course of time implementation lapsed. Many of the generators that experienced outages in 1989 failed again in 2011.

In the gas side, producers experienced production declines in all of the recent prior cold weather events. While these declines rarely led to any significant curtailments, electric generators in 2003 did experience, as a result of gas shortages, widespread derates and in some cases outright unit failure. It is reasonable to assume from this pattern that the level of winterization put in place by producers is not capable of withstanding unusually cold temperatures."

There are things that cold weather states do to make their energy systems ready for cold weather.  By that, we mean the whole enchilada – from wells to pipelines to wind turbines to heating systems. Winterization costs money. Texas has not made the investment.

But a decade after that report was written, Texas has not taken the steps needed and recommended to make its grid more resilient. Overall, Texas is a warm state, right? We get that. But this week’s temperatures were not even all-time lows.

Our sense is that folks in charge of the Texas power grid, including the governor and legislators, took a gamble that a catastrophic event would not happen on their watch. Now don’t get all high and mighty; we see that type of thing play out all the time here in New England.

On the other hand, Texas is unusual insofar as its power grid is almost an island. The United States power grid is actually a quilt of several regional power grids. The six New England states, for example, have a unified electricity grid. Texas is on its own and is mostly disconnected from adjacent states. There’s a risk to this “independence.”

Overall, the planet is getting warmer. In particular, the Dallas area is 3.8 degrees warmer today on average in the winter than in 1970.  But not every day! 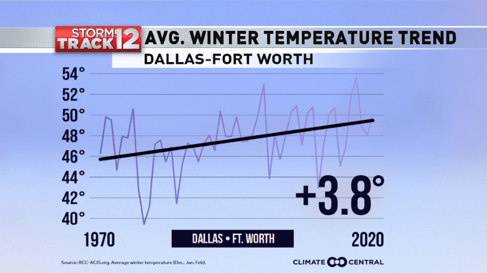 Climate is one thing and weather is another. We are seeing weather extremes all over the place. Droughts, heavier rains, stronger hurricanes, and so on. Extreme cold snaps too, like the one that just happened in Texas. These are all examples of climate change, or what energy guru Amory Lovins calls “global weirding."

To defend oneself from the ravages of global weirding, one first needs to accept the scientific fact that the climate is changing and that people are causing that to happen.

When the tough gets going – lie!

Despite what the fellow at ERCOT said, you probably read and heard that one “explanation” for the dire conditions was that wind turbines there were frozen and failing to produce power. People like the governor of Texas and “journalists” at Fox News were shouting that from the rooftops. They were blaming the Green New Deal, which is an idea, not a law. And that misinformation was spread wide, especially on social media, just as intended. 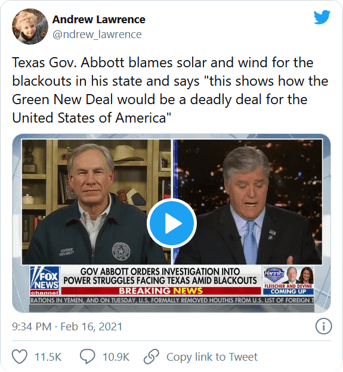 The people pushing this narrative are not stupid. They know that the problem in Texas is complicated and that green energy is not to blame. But their agendas – political and business – have been set by the fossil fuel industry: Big Oil, Big Gas, and Big Coal. And they know that a good chunk of the American public will buy what they’re selling without concern for the facts. They will get their message across on Fox News, Parler, and Facebook to the extent it serves their interests, regardless of how the facts are checked by good journalists.

By the way, Abbott has been governor for six years and before that was the Texas attorney general (see above reference to 2011).  Rather than accepting some responsibility, he’s making up stories about a Green Monster.

Wind Power is Big in Texas Because of Economics, Not Policy

In New England, a lot of us demand more wind power from our elected officials. But in Texas, wind power’s expansion has been driven by economics far more than policy. A hundred wind turbines in the wide-open spaces can produce power more cheaply than gas or coal. By the way, the states in the US with the most wind power capacity are all “red” states – Texas, Oklahoma, Iowa, and Kansas.

What lessons have we learned from Texas?

The crisis in Texas was caused by a combination of unprepared infrastructure and the impacts of global weirding and climate denial: 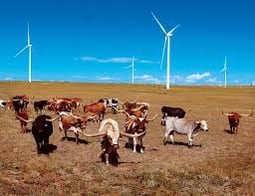 not by renewable energy. Up here in the Northeast, we can learn from our friends in Texas. Although New England is generally well-prepared for cold weather, there are other vulnerabilities in our electric and heating infrastructure that can lead to misery. For example, a faulty natural gas valve on Aquidneck Island left many Rhode Islanders in the freezing cold in January 2019.

We believe the solution is a modern, clean, resilient energy sector that can adapt to an unpredictable and changing climate.