Our enemies are gasoline and the internal combustion engine 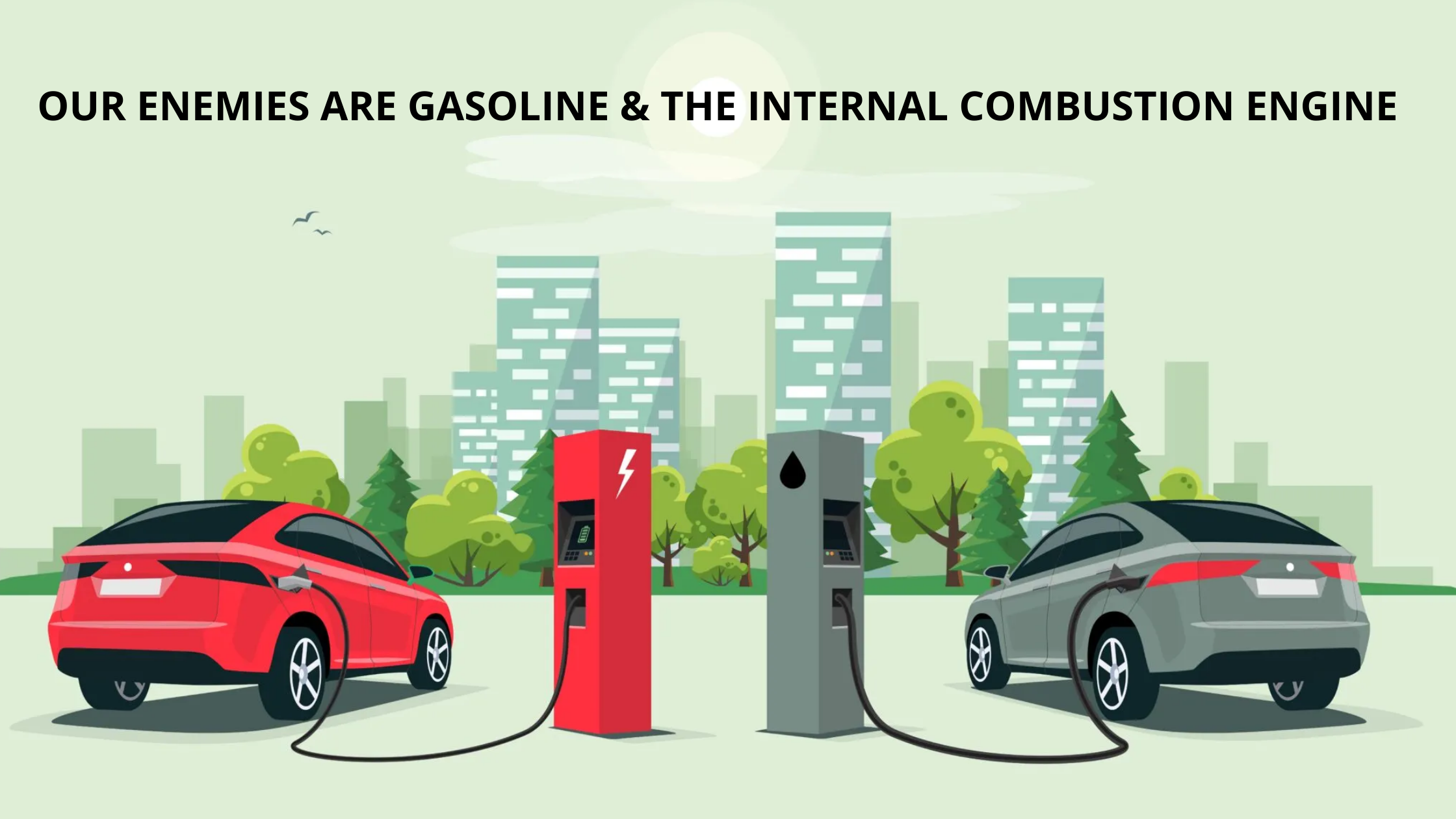 From 1982 to 2016, Green Energy Consumers Alliance focused our attention on building energy for homes and businesses. But in 2016, alarmed at the rise in greenhouse gas emissions from cars, we became aware of the potential of vehicle electrification as a measure to reduce those emissions. Since we are an alliance of consumers and, at our core, connect energy users to cleaner options through our program offerings, we looked outside the house and began our Drive Green program in order to educate people about electric vehicles (EVs) and to give them a chance to get one at a more affordable price. We’re very proud of Drive Green, and over the last five years, we have broadened our work on transportation by engaging in advocacy work on this front. In doing so, we have become more closely associated with great advocates for transportation modes other than cars, such as all public transit, walking, and biking. They’re right when they point out that it’s long overdue that we do something about car dependency. They’re right when they say that not everyone can afford a car and that because a lot of people can afford a car, we’re all wasting an incredible amount of time in traffic. The status quo is awful. It’s changing our climate, harmful to our health, expensive, not serving everybody well, and a demoralizing waste of time.

Recently, there's been a lot of stories that pit EVs *against* transit, biking, and walking. We think we need all of the above to address the true enemy: gasoline and the internal combustion engine. Fixing the transportation emission mess requires a comprehensive solution set that includes public transit, walking, biking, and electrifying vehicles of all sizes, from 2-wheelers to 18-wheelers. Let's create a better transportation system that gives people options beyond single-occupancy vehicles. And then let's make sure that those vehicles we still have on our roads are electric.

One particular discussion point that has come up recently is that EVs, because they are passenger vehicles, will not solve our (massive!) congestion problems. It’s true that our reliance on personal vehicles is an inefficient way to move people. The image below tells the story of how much street space required to move 60 people. As you can see, the mode that is most expensive – automobiles – takes up a lot more space than either buses or bicycles.

Congestion is a problem that deserves targeted remedies.  We need to increase ridership on public buses and trains and, at least for Boston, we need congestion pricing. Congestion pricing has worked in other cities. It collects a fee on drivers on roads during periods of traffic congestion, which can then be allocated to funding walkways, bike paths, and a better MBTA.

Obviously, it won't work for a 30-mile-a-day commuter to switch to a bicycle to get to work. The problem is when the personal vehicle is the default mode for every trip, even the ones that are 2 miles or less – which currently make up a third of all car trips.  This makes the entire system less efficient for everyone – the tragedy of the commons. It's in the best interest of the climate, our health, and congestion relief to not focus on a single mode, but to make it easy to pick the transportation mode that is most efficient for the individual and the system.

But while it’s true that buses, in addition to taking up less space per person, emit less per rider than cars, and that walking and biking are beautifully pollution-free, the simple fact is that even if we support these modes of transportation as we should and many more people – particularly in urban centers – switch to them and leave behind their personal vehicles, we will still be left with a tremendous number of cars on the road.

The draft Massachusetts Clean Energy and Climate Plan for 2030, for example, assumes that vehicle miles traveled (VMT) will stop growing between now and 2030. In our comments on the CECP, we said that’s not good enough: we need to reduce VMT, and one of our biggest criticisms of the 2030 Plan was its complete neglect of the value of public transportation. The recently published Transportation Sector Technical Report for the Massachusetts Decarbonization Roadmap modeled various ways of reducing VMT. Their most aggressive scenario showed an approximately 15% reduction statewide in VMT by 2050. Suffolk County (mainly Boston) showed the biggest reduction, almost 35%. 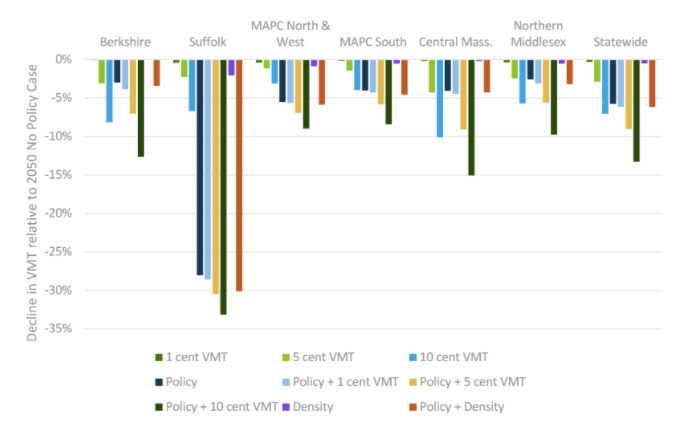 When we see a scenario like that, we say, “Go for it!”  Pull out all the stops and bend that curve. But even if we do, VMT would be 85% of what they are today. And if all those miles are going to be petroleum-based, then we simply won’t meet the state’s new legislative requirement of reducing GHG emissions 50 percent by 2030 or 85 percent by 2050.  On top of that, the forms of pollution that cause tremendous health problems, especially to overburdened communities (like those where we decided to build our highways), will go unabated. The health benefits of switching those VMT to electricity are immense and cannot be dismissed.

The draft CECP calls for having about 750,000 to one million EVs on the road by 2030. If reducing VMT helps us reduce that number of EVs while still meeting the 50% GHG target, that would be a good outcome. An even better outcome would be reducing VMT considerably with better, more affordable transportation options and getting one million EVs on the road because none of us should be sanguine about the certainty of reaching the 50% by 2030 target. To get to 50%, we need to reduce emissions economy-wide at more than twice the rate we’ve accomplished in recent years.

Rhode Island recently passed An Act on Climate, which sets an emission reduction target of 45% by 2030, almost as stringent as Massachusetts. So that means about the same level of commitment as Massachusetts in terms of reducing miles traveled by gasoline-powered cars.

You might be thinking, where is the money going to come from to pay for the “ands”?  We already mentioned congestion pricing for Boston. But otherwise, one big answer is the regional Transportation Climate Initiative, which we’ve covered before. That’s currently being proposed in Massachusetts, Rhode Island, Connecticut, and Washington, D.C. And we’re hoping it will spread to other states from Maine to Virginia. For the states we work in, it would bring  $160 million per year to Massachusetts and $20 million to Rhode Island.

Here’s our main point as succinctly as we can make it: To solve our transportation and climate problems, we cannot be for bikes or walking or public transit or EVs. The word “or” will prevent us from solving the problem. We need to replace “or” with “and” to defeat the real enemies, which are gasoline and internal combustion engines.  And the Transportation Climate Initiative will help pay the bills.