Rhode Island just passed legislation that requires the state’s electric suppliers to procure 100% renewable electricity by 2033, using the highest quality (“Class I” or “new”) Renewable Energy Certificates. The Massachusetts legislature, meanwhile, isn’t considering a Renewable Portfolio Standard update in the climate bills that have been passed by the MA House and Senate and are currently being negotiated in the conference committee.

But wait! Massachusetts could get to 100% low-carbon electricity without legislative action—thanks to a related, but less understood, policy called the Clean Energy Standard. Green Energy Consumers is advocating for MassDEP to raise the Clean Energy Standard so that Massachusetts hits 100% low-carbon electricity by 2030. We think that’s necessary to stay below the Commonwealth’s 2030 GHG limits--and it's within the Governor's power.

So what is the CES, and how can it help us get to 100% clean electricity in Massachusetts without the legislature’s approval? 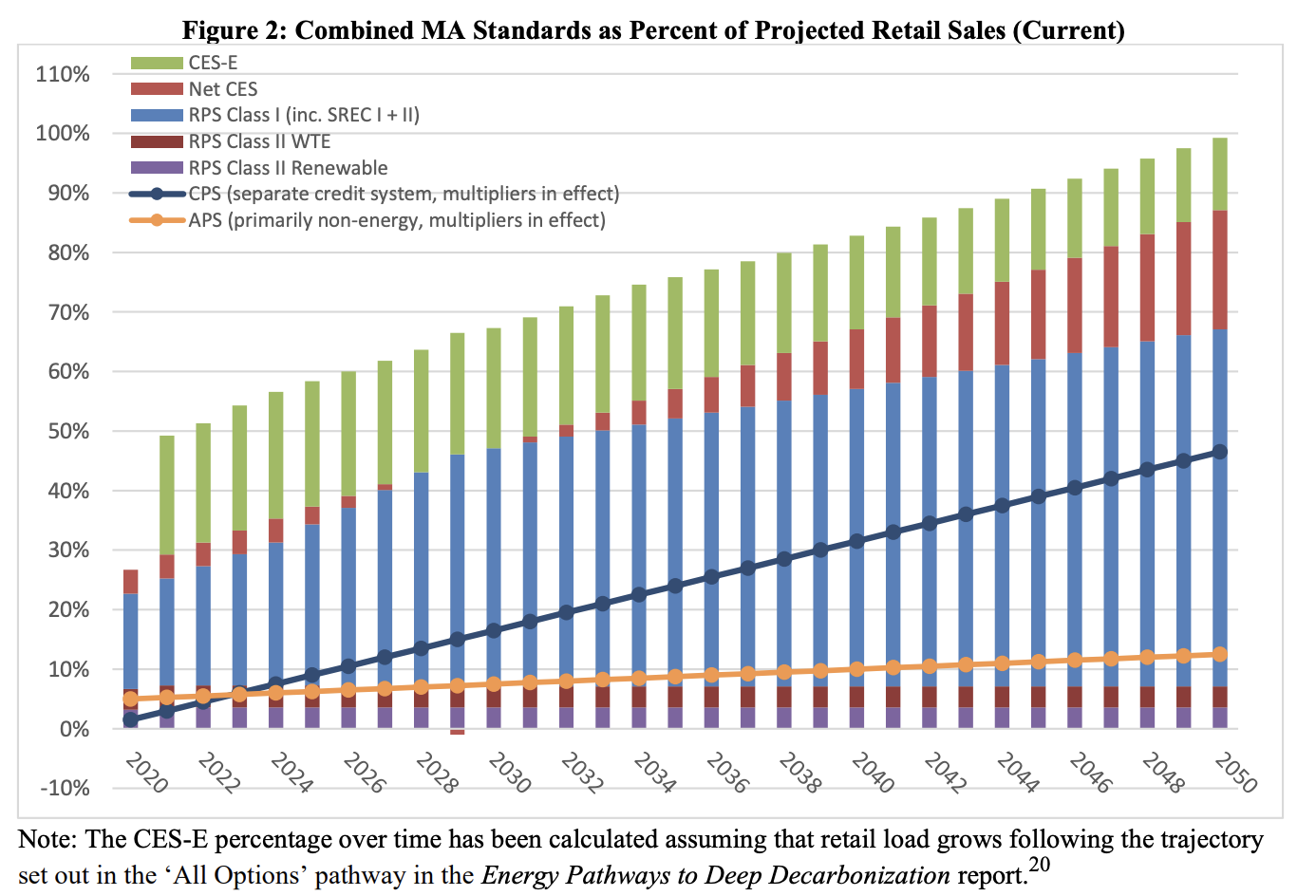 Renewable Portfolio Standard (RPS): The Class I RPS is Massachusetts’ equivalent of Rhode Island’s Renewable Energy Standard (RI RES), which was just updated to achieve 100% by 2033. The RPS requires electric suppliers (Eversource, National Grid, Unitil, and competitive electric suppliers) to deliver a rising minimum percentage of their electricity from certain renewable resources. The Class I RPS only allows “the best” renewable resources: especially solar, wind (both onshore and offshore), and other resources deemed lowest carbon and highly sustainable, such as anaerobic digestion and small hydropower. To be eligible for Class I designation, projects must be built after 1997.

More ambiguously sustainable resources, including biomass and “waste to energy”, are typically only allowed to count towards the Class II RPS, a much smaller category that does not grow over time.

Clean Energy Standard (CES): The CES acts as an umbrella to most of the other “standards,” including the RPS. But the CES is set at a level even higher than the sum total of the other standards that it includes—this gap is called “net CES” in the graphs, and can be filled by resources that do NOT qualify for the RPS. The most important of these was Canadian hydro. In 2016, the legislature passed An Act Relative to Energy Diversity that led to Massachusetts utilities signing a long-term contract with Hydro Quebec for 20% of the Commonwealth’s electric supply. That project relies on a big power line being built through Maine—but the difficulty of siting this transmission line has jeopardized the whole contract. If this massive project fails to produce power for Massachusetts, electric suppliers will have to meet their net CES requirements with Class I renewable energy (again, mostly from wind and solar) that also qualifies for the RPS. In this scenario, raising the CES is effectively the same as raising the RPS.

Clean Energy Standard Existing (CES-E): The CES-E is a separate carve-out that sits “on top” of the CES. This standard requires a flat 20% of supply from existing low-carbon resources, including older New England-based hydropower and nuclear. It provides a very small incentive to these resources; MassDEP’s rationale is to help older low-carbon resources stay online as we transition to clean energy.

Can MA reach 100% renewable through the CES?

In recent proposed regulations, MassDEP outlined plans to increase the CES to 60% by 2030, which would then drop down to a slower rate of increase, so MA still wouldn’t get to 100% overall until 2050. They also recommended bumping up the CES-E from 20% to 25%, and increasing the “Alternative Compliance Payment,” which incentivizes electric suppliers to purchase renewable energy rather than paying the noncompliance fee. 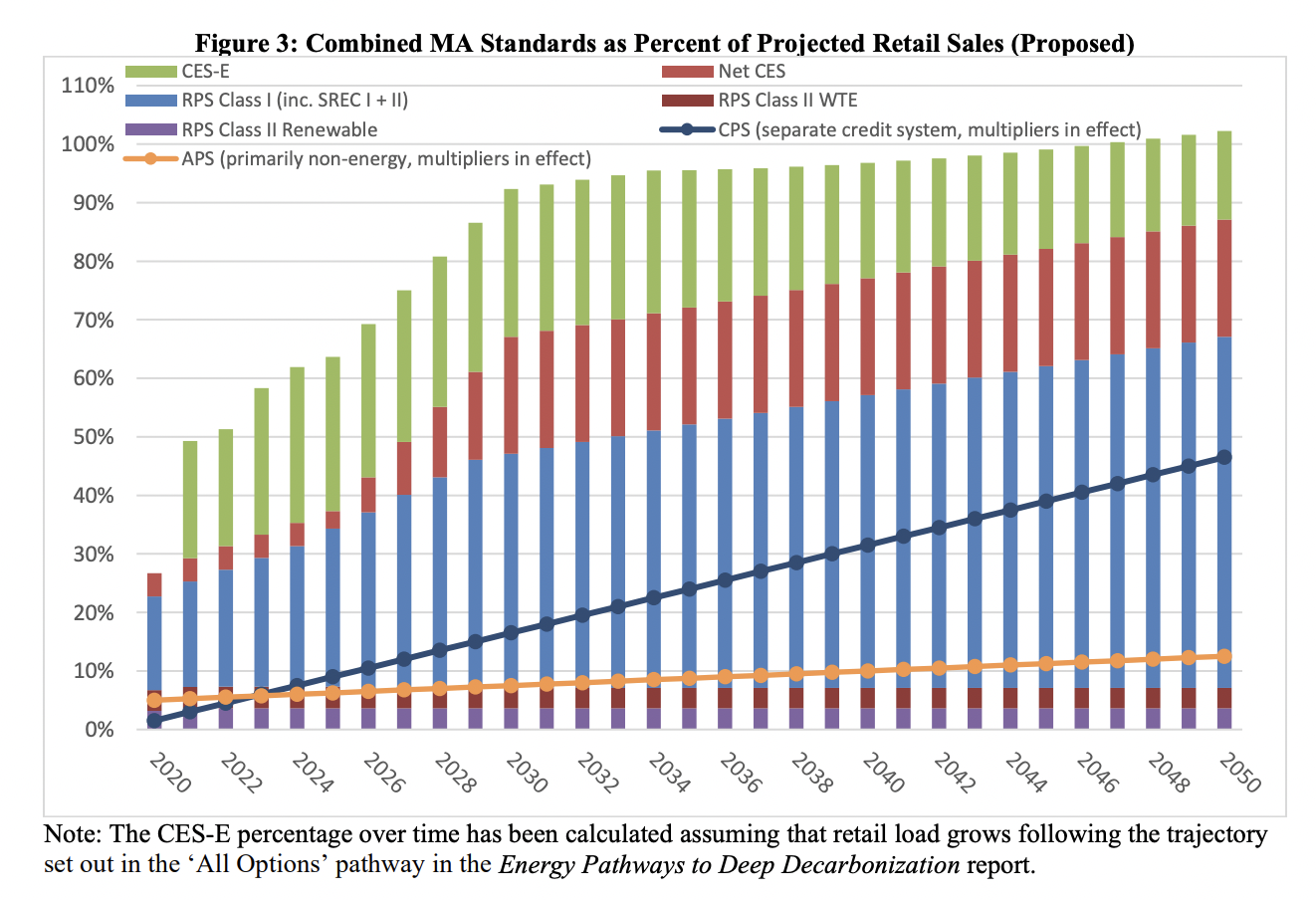 We think that MassDEP can do much better. In fact, they’ll need to in order to reduce emissions in time to meet the 2030 GHG limit. A 100% electric grid is necessary to ensure we meet the 2030 climate goal, because decarbonization measures in other sectors, such as transportation and heating, are taking a longer time to materialize than planned for in the initial Clean Energy and Climate Plan draft.

Green Energy Consumers Alliance submitted comments that called for increasing the Clean Energy Standard even further than proposed by MassDEP, to at least 75% by 2030, resulting in 100% zero carbon energy. We think the CES should then rise 1% to 2% per year as generation that qualifies for the CES-E, like nuclear and legacy hydropower, begin to retire.

We note that failing to increase the CES would result in numerous negative consequences for Massachusetts and the region:

Although the comment period for these regulations has officially passed, we will keep you updated on what happens. Most importantly, we hope that this helps you understand what the CES is and why it’s so important.

The final interim CECP, the administration’s plan to achieve the 2030 GHG limit, is due out at the end of this month. We are eager to see what it says about how it will decarbonize the electric sector. As 2030 quickly approaches, we believe that the CES and/or RPS will need to be updated to meet the 2030 GHG limit, respond to the offshore wind procurements that are being kicked off by legislation, and keep up with neighboring states’ commitments to 100% renewable electricity (2033 in RI and 2040 in CT). There will be future regulatory or legislative opportunities to raise the CES. After all, Massachusetts will be electing a new governor in November. Regardless of who is in the corner office, Green Energy Consumers will advocate for 100% by 2030.