The lockdown imposed across Northern Italy in late February to block the spread of COVID-19 has resulted in a dramatic decrease of emissions in the Po Valley, historically one of the most polluted regions in Europe. The satellite images produced by the European Space Agency (ESA) show the tropospheric column levels of nitrogen dioxide (NO2) – a chemical tracer of fossil fuel burning - decreasing five-fold in the span of just 9 days.

Non ci credo. In other words, I can’t believe it. This is what S., a long-time friend and former coworker from Milano, said to me on the phone. Our incredulity mainly referred to the global COVID-19 pandemic that had been ravaging through Northern Italy in the prior 2 weeks. Italy is my home country, and my brother is an emergency room doctor in Central Italy. I have family and friends in Milano. The last month has been nothing short than heartbreaking at a very personal level.

Eventually, S. and I turned our conversation towards another incredible phenomenon: the dramatic drop in air pollution that occurred over Northern Italy after the shelter in place orders confined millions of people in their homes. As shown by the satellite images above, the levels of nitrogen dioxide, NO2 – a product of combustion emissions that has known harmful effects on the lungs – have decreased five-fold in less than 2 weeks. Such decrease was mainly caused by the drastic drop of traffic emissions and, to some extent, industrial activities in the area.

After spending months of my previous career measuring air quality in the Po Valley along with local scientists, and getting frustrated by the slow mitigation measures to curb pollution especially from traffic emissions, it is incredible to witness such a dramatic cleanup in just a matter of days.

What COVID-19 is Doing to Pollution

The Po Valley example is not entirely unexpected and certainly not unique. Satellite images collected over China a month earlier showed the same trend, and are an irrefutable demonstration of how much pollution is generated by fossil fuel combustion. 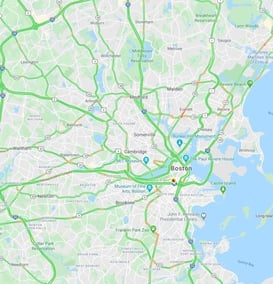 As human activities slow down worldwide to contain the spread of COVID-19, the unthinkable is also happening in major U.S. cities: traffic and congestion are down to an historic minimum. This image of eastern Massachusetts was taken on Thursday March 19 at 17:00, the typical rush hour times. On an ordinary day, the entire area would be red, streets jammed packed with traffic. In Boston, we know that well.

Not surprisingly, pollution is also down. The data below is from the Harrison Avenue air quality monitoring station in Roxbury Crossing, Boston (you can check the real time data for any station in the PurpleAir network here). The data show a steadily decreasing trend - indicated by the red line - of fine particulate matter (PM2.5). On March 2, the average daily PM2.5 load at Harrison Avenue was 10 micrograms per meter cube (µg/m3). By March 17, after a few days from the closure of schools and businesses, PM2.5 was hovering around 2 µg/m3.

The ‘up and down’ cycles in PM2.5 are a typical signature of traffic emissions generated on weekdays at rush hour. They could be observed every day during the first week of March and were almost gone after March 11.

The New York Times recently reported on how pollution is also receding in Los Angeles, Seattle, and New York City. Almost everywhere nationwide, and especially where travel restrictions are in place, we are enjoying the cleanest air ever.

However, relying on a pandemic to reduce carbon emissions is obviously not what we want. We want clean air and we need to keep fighting climate change regardless, and certainly after this terrible crisis is finally over. To do that, we need to have a serious plan to steadily shift away from combustion engines and towards electric vehicles (cars, buses, trucks), while also promoting sustainable forms of transportation such as public transit, walking and biking to reduce congestion.

Air quality and climate change are not the only two reasons why we need to decarbonize & electrify. As it turns out, pollution creates long lasting damage to our lungs. Particulate matter, nitrogen dioxide and ozone (which is created by the reaction of volatile organic compounds and nitrogen oxides released by combustion processes in the atmosphere) decrease lung functionality, and cause or aggravate asthma. These conditions inflame our lungs and make them more vulnerable to diseases, and it turns out, much weaker when it comes to the ability to fight novel viruses like COVID-19, as suggested by experts.  Northern Italy, like China, are critical pollution hot spots. We don’t have the official statistics yet, but we should not be surprised if in a few years we hear that people living in the most polluted areas had the worse outcomes when trying to fight this virus.

This is somewhat expected: during the 2003 SARS outbreak, infected people living in areas with more air pollution were two times more likely to die compared to those living in less-polluted regions. And, we have known for a while that each year air pollution shortens the life of 7-8 million people worldwide by up to 3 years. Effectively, air pollution is an ongoing, silent, relentless global epidemic. And it is the poorest and the most socio‑economically vulnerable that are disproportionally affected, because they are exposed to higher levels of industrial and traffic emissions throughout their lives.

While we want and need life to get back to ‘normal’ as soon as it is safe, we also know that going back to burning carbon as usual will do additional long-lasting damage to our lungs and the environment. Air pollution and climate change are underlying global crises that still need serious intervention, and a global response. And we need those lungs of ours to stay healthy for as long as possible.

That is why at Green Energy Consumers we are focused on electrifying the transportation sector, from helping people to get electric cars with our Drive Green program to advocating for electric buses. We are also working hard to increase the amount of clean renewable electricity at home through the Green Municipal Aggregation program, while helping you reducing heating & cooling emissions with our Heat Pump program and advocating for energy efficiency measures.

The work to decarbonize and electrify goes on, and we need everyone on board.

Until then, stay healthy.

Paola Massoli is a member of our Policy Team, has a PhD in Atmospheric Sciences and is a Master's Candidate in Sustainability and Environment at the Harvard Extension School.