Summer 2019 is on track to be another hot one. The relentless month-long heat wave in Northern Europe has now shattered all previous records with temperatures in the triple digits. Over the last few days, we saw images of Alaska burning and Greenland melting in 90°F weather. This July, New England has had its share of hot and uncomfortable weather too, with Boston daytime highs reaching 100°F and night-time temperatures around 80°F. We even experienced two rare weekend peaks on July 20th and July 21st. Peak days result in greater demand for energy, but extreme heat also contributes to more air pollution and that is detrimental to public health.

It’s no secret that excessive heat is dangerous. That’s why the National Weather Service issues heat advisories in extreme weather. Heat makes it hard to stay sharp and active, and it can cause dangerous heat stroke or worsen existing medical conditions.

Ground-level ozone is the most common component of urban smog. Ozone irritates the respiratory system and diminishes lung function, aggravating asthma and other conditions. The chemistry that leads to ozone formation is complicated, but temperature has a well-recognized role: generally, the hotter and sunnier it gets, the more ozone is formed.

The U.S. Environmental Protection Agency (EPA) calculates an Air Quality Index based on the most dangerous air pollutants, including ozone, particulate matter smaller than 2.5 micron (PM2.5), carbon monoxide, sulfur dioxide (SO2), and nitrogen dioxide (NO2). When the Air Quality Index approaches 100, people with respiratory conditions, children, and the elderly may start experiencing adverse health effects.

Not only does summer heat drive higher peak demand, it does so exponentially. As our summers get hotter and hotter, peak demand grows faster. As the following chart illustrates, once temperatures cross the 80 °F average across New England, the rate of demand growth starts to increase. 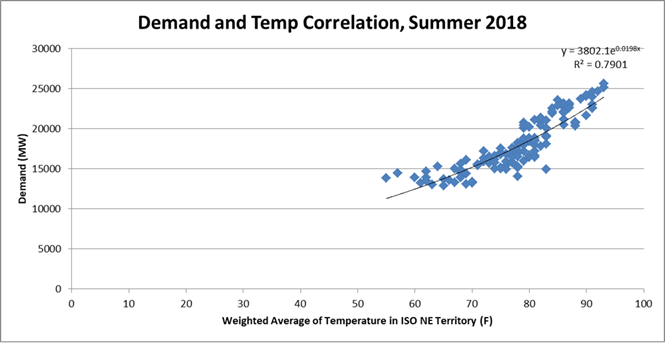 The difference between 90 and 95°F is a big one: electricity demand can go up by 3500 MW, which is equal to about 25% of New England’s electricity demand on a normal day. This increase has repercussions on air quality and climate, because natural gas, coal, and oil plants are among the go-to fuel sources to supply the high electricity demand on peak days. This leads to high levels of particulate matter, greenhouse gases (GHG), and ozone precursors across New England.

The link between peak electricity demand and high levels of air pollution is clear. Researchers from the University of Madison, Wisconsin found that the electricity used to power air conditioners increased emissions of sulfur dioxide, nitrogen oxides, and carbon dioxide by an average of 3.5% for every two degree °F increase in heat.

There is a vicious cycle going on: hot temperatures force people to turn on their air conditioners, which drives up demand for polluting electricity and releases even more dangerous, warming emissions into the air. Avoiding using unnecessary energy or turning up the air conditioning temperature a few degrees have quantifiable health savings, translating to almost 5 cents/kWh of saved energy across the Eastern U.S. Using state-specific data from that study, we calculated that health savings are 8.4 cents/kWh for Massachusetts and 4 cents/kWh for Rhode Island. In other words, we could save on health costs by reducing electricity demand.

How can we break the vicious cycle?

We can start breaking this vicious cycle by take simple actions. Shaving The Peak is one good step on the hottest days. But we can act year-round by reducing the carbon from our cars, electricity supply, and heating systems – and by flying less.

Changing how we get around may be the most powerful way to break the heat/pollution cycle. The transportation sector remains the largest source of air pollutants in New England states. Our Drive Green program helps consumers cut their transportation emissions by switching to electric cars (EVs). Electric cars charged on the New England grid release just 25% of the carbon of a gas car, and just 10% of the NOx – and remember, NOx is a big factor in local air quality. That’s a huge difference.

It makes sense, then, that the public health benefits of driving electric come out to 5 cents per kWh of electricity used to charge the car. 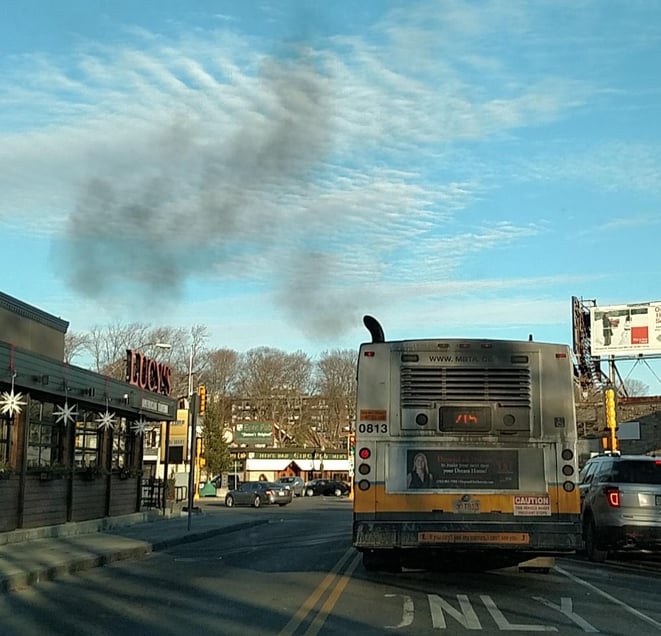 At Green Energy Consumers Alliance, we are also advocating for a truly zero-emission public transportation system that would eliminate the notoriously toxic diesel emissions from transit buses and diesel trains. Diesel exhaust contains a plethora of toxic pollution including ozone-forming NOx, volatile organic compounds, and particulate matter (mostly soot, as you can see in the picture above). Diesel hybrid technologies, while removing the visible soot, leave behind half of the NOx, plenty of invisible ultrafine particles, and all the greenhouse gases.