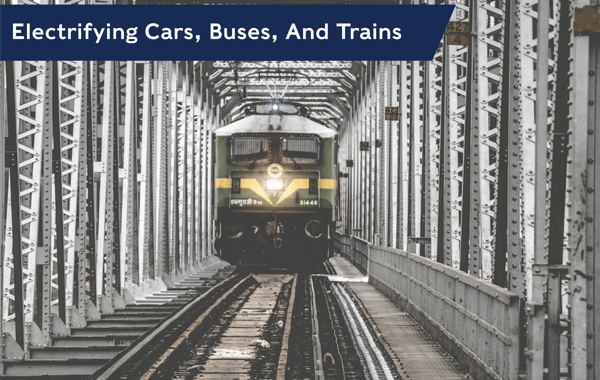 In Massachusetts and Rhode Island, emissions from transportation are our biggest climate problem. Although emissions from electricity generation aren’t dropping as fast as we need them to, energy efficiency programs, renewable energy development, and the Regional Greenhouse Gas Initiative have put power-sector emissions on a downward trend. Unfortunately, we can’t say the same about transportation emissions when almost all of our cars, trains, buses, and other vehicles run on petroleum internal combustion engines. Vehicle electrification is absolutely necessary for us to attain our climate goals.

We share the widespread view that increasing ridership in regional transit authorities such as the MBTA and RIPTA is critical; however, that’s not enough. We need to switch vehicles from petroleum to electricity. To be specific, battery-powered cars are cool. Battery-powered transit buses are cooler. Battery-powered school buses are the coolest. Here’s why: Running a car on basic utility service in Massachusetts or Rhode Island reduces carbon emissions by about 75-80% compared to gasoline and that benefit will grow over time as the grid continues to add wind and solar. Today, most buses run on diesel, which emits more nitrogen dioxide (which causes smog) and much more particulate matter (soot, which is really nasty for public health). 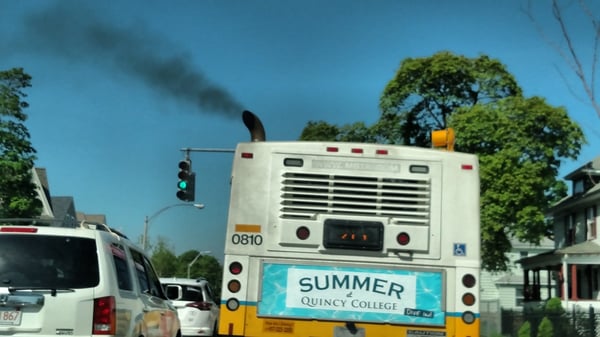 And, as Captain Obvious tells me, a bus carries a lot more people each day than a passenger car. And school buses carry the most precious cargo of all.

With that as our backdrop, here are a few steps we think are essential to bringing about the shifts we need at scale on the timetable our planet (and our lungs) deserve.

When it comes to passenger cars, there are two key points: States are not going to meet their climate goals unless we get more people buying or leasing electric cars instead of gas-powered cars. And consumer rebates are a necessary bridge to better tools to incentive EV adoption (like electricity rates that incentivize EV adoption while reducing grid costs).

Massachusetts and Rhode Island have ambitious adoption goals for electric vehicles: under their Zero Emission Vehicle (ZEV) goals, Massachusetts aims to have 300,000 EVs on the road by 2025, and Rhode Island’s target is 43,000. Successfully meeting those goals is a key part of meeting overall state climate goals. But here’s the thing: Massachusetts has, so far, attained less than 7% of its 2025 goal. Rhode Island is at less than 4%. Both states need to rapidly develop and expand electric passenger car incentives, policies, and programs.

Consumer rebates alone will not transform the enormous automobile market, but in the immediate term, rebates have proven to be an essential driver of EV adoption. This is true nationwide and throughout the world. Undoubtedly, the $2,500 rebate on new EVs offered through Massachusetts’ MOR-EV program since 2014 has helped to achieve the 7% of our EV target currently on the road, mentioned above. However, the program is running out of funds. Rhode Island’s DRIVE EV rebate ran out over a year ago. In the short term, the states should provide consumer rebates to help defray the upfront cost of EVs. Even if Massachusetts and Rhode Island were to replenish funding for EV rebates, they are not going to find the approximately $800 million needed to rebate their way to the 2025 ZEV goals. Regardless, we can’t allow rebates to fall by the wayside.

We recognize that other complementary policies and incentives, capable of facilitating long-term EV market growth, are needed. And we are advocating for those long-term solutions. At the same time, however, Green Energy Consumers Alliance recommends extending rebates for another year or so, which would continue to support the market while allowing policymakers to replace rebates with a longer-term incentive. Furthermore, rebates should be limited to cars with a Manufacturer’s Suggested Retail Price (MSRP) of $50,000 or less. After all, someone who can afford a luxury car doesn’t need a $2,500 state rebate.

Where the states have fallen short in providing sufficient rebates for consumer-friendly EVs, Green Energy Consumers has stepped up. Our Drive Green program further reduces the upfront cost of an EV. Hundreds of folks in Massachusetts and Rhode Island have purchased or leased an EV through Drive Green at well below market prices (in addition to receiving federal tax credits and the state rebates). Plus, on new vehicle purchases, our discounts have mostly been larger than the state rebate.

Over time, more used EVs will become available. A significant percentage of new EVs are leased for two or three years. When those cars come off their leases, they will be available for leasing or purchase at affordable prices, making a used EV a great option for low- and moderate-income drivers. If needed, a simple, low-cost program could provide low- and moderate-income EV buyers with credit support to finance the EV purchase or lease.

Where buying an electric passenger car just doesn’t make sense for a given individual, electrified and improved public transportation—or even car-sharing systems—can fill in the gaps. Funding earmarked for electrification could help programs like Zipcar and Maven reduce emissions from their fleets.  At scale and with the right program design, we could even subsidize rides taken by low-income drivers.

Charging Ahead on Passenger Cars:

EV incentives should extend far beyond one-time, at-purchase rebates. As soon as possible, we need to implement electricity rates that benefit both EV drivers and those who do not drive EVs.  Wholesale electricity costs a lot less during off-peak hours (weeknights and weekends), so electricity suppliers could pass those savings along to drivers who charge their vehicles off-peak in the form of a lower rate. A driver’s overall electricity usage will go up once they aquire an EV, which means he or she will pay for more of the fixed costs associated with maintaining the grid. EVs broaden the rate base to create a win-win situation.

Even without off-peak charging discounts, EVs cost less to run per mile than on petroleum. But another nickel or dime off per kilowatt-hour is possible and it would send a great signal to the market in a way that is fiscally sensible for all energy consumers in the long run.

To enable these rates, the utility needs to know when the car is being charged. In California, where smart meters have been rolled out around the state, every consumer will have time of use pricing by January 1st. But there are other methods in play: Some utilities subsidize the installation of “smart charging stations” that are WIFI-enabled. Many drivers want a Level 2 charging station anyway, so why not add the WIFI? Other utilities use a WIFI-enabled device that plugs into the diagnostic port of your car as their way to determine when you are charging so that they can give you the off-peak discount. All of these methods can be effective. Utilities, carmakers, and policymakers need to pick one or more and implement soon.

Although electric passenger cars are a big part of the emissions-reduction puzzle, they don’t tell the whole story. Battery electric transit buses offer these ginormous benefits:

So how do we get them on the road? For the next few years, battery electrics will cost more than diesel buses (or buses that run on natural gas or propane). But they cost so much less to energize and maintain that they’re cheaper over the lifetime of the bus. If a transit agency can finance a diesel, it can finance a battery electric. So it’s not an economic decision, it’s a public finance decision (i.e. a political decision). In terms of marketing, this is not about persuading millions of customers. We know the customer base for buses. There are only a few transit agencies and they are supposedly publicly accountable.

And again, buses that charge off-peak present another huge opportunity to reduce energy costs for the fleet operator (assuming time-of-use rates) and minimize grid costs for all ratepayers

There are a few electric buses rolling in New England, but not enough. There are a few good examples, but let’s give a shout-out to the Worcester Regional Transit Authority: 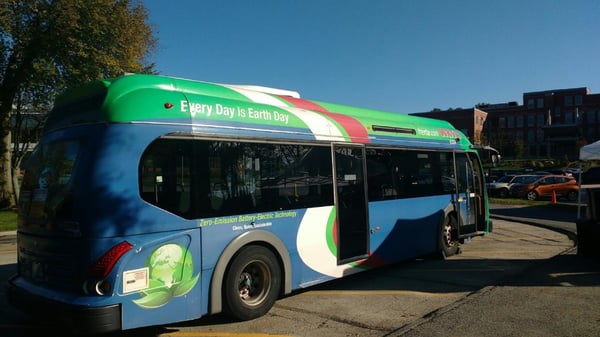 And the Rhode Island Public Transit Authority (some of us at Green Energy Consumers were thrilled to ride on one of RIPTA’s three brand new Proterra electric buses): 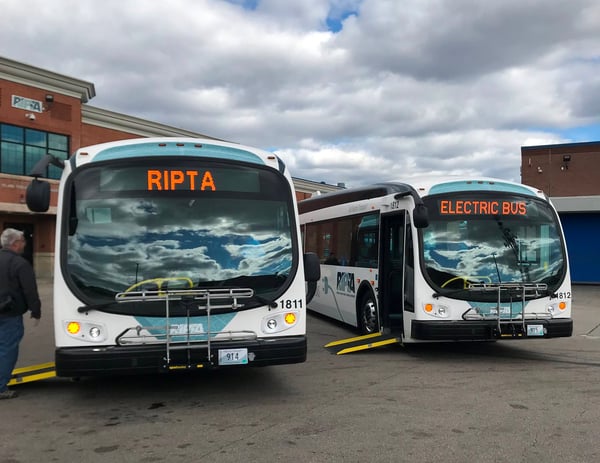 Electric School Buses are The Coolest:

And if buses offer the benefits listed above, then how in the name of Ms. Frizzle can we possibly transport children in buses that run on diesel? School bus decisions are made at the local level by mayors, school superintendents, and school committee members. No city or town should buy, lease, or contract for any more dirty diesels when electric school buses are already available, as they are now. 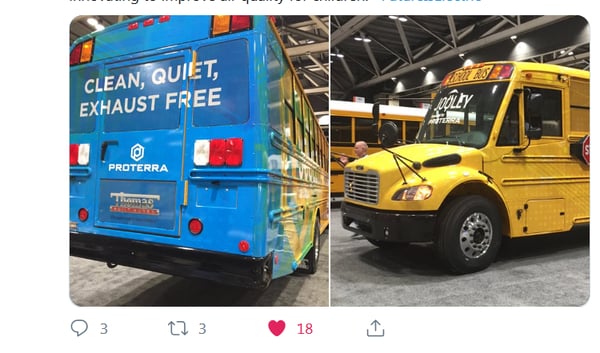 To finance consumer rebates, charging stations, electric buses, and better subways, we’re going to need money that is not available today. As we suggested above, electricity rate design gets us part of the way there. Nonetheless, these investments will need funds generated outside the electricity system, especially for public transportation improvements. We are allied with a number of groups advocating for the Transportation Climate Initiative (TCI), a market-based method of reducing fossil fuel emissions that would likely involve several states in the Northeast. TCI is based upon the Regional Greenhouse Gas Initiative, which has successfully reduced carbon emissions from the electricity generation sector since 2009. The governors of both Massachusetts and Rhode Island say that they are working to implement TCI. It’s our job to make sure they follow through.

So: If you are sold on the idea that we must electrify transportation in all its forms, join us in rocking the boat.

Speaking of boats, they can be electric too…