7 Days of Gratitude - one non-profit reflects

With innovative clean energy developers, enthusiastic members, amazing staff and board, and awesome volunteers in the mix, our organization's story can be told in what we're grateful for.  We hope these stories will inspire you to support our work the same way they have inspired us to persevere.

Here's a quick recap of #7DaysofGratitude (click to read each individual story): 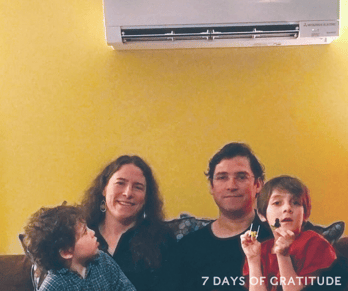 They started by switching all of their lighting to LED bulbs. When it came time to replace their water heater, they opted for a high efficiency unit. And when we ran our Mass Solar Connect program in 2015, they added solar panels to their home. Most recently they have installed heat pumps to reduce their heating oil needs. 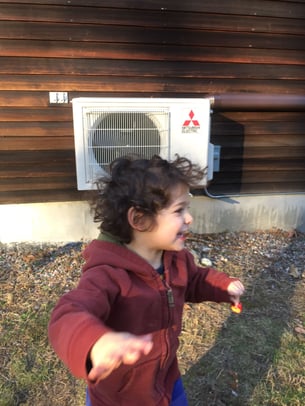 Early adopters like Ricard and Christine prove that the market is strong for low-carbon ways of heating and lighting our homes. We’re grateful to have so many members like them.

We’re grateful for the community activists and their public officials who learned about Green Municipal Aggregation (GMA), educated others in their community, and worked to get the program up and running. Thanks to their efforts, an impressive amount of local renewable energy is being added to the grid above and beyond that required by state law. The model as many other communities are following suit, here in Massachusetts and soon in Rhode Island. 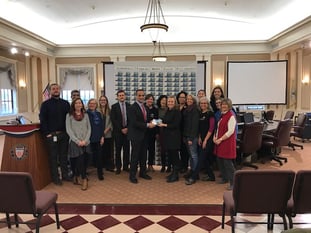 The City of Somerville, which started in 2017.  Mothers Out Front was instrumental in working with the mayor’s office on this program. 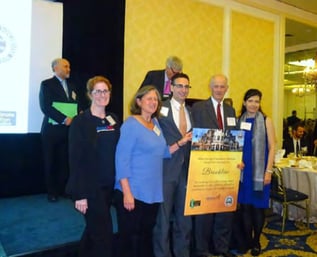 The City of Boston, which has been approved by the City Council and mayor’s office, thanks to the efforts of Mothers Out Front and Boston Climate Action Network.

Today we're keeping it simple. We're grateful for our staff and board, both past and present. From advocates to customer service reps, energy innovators to finance professionals, these individuals care immensely about helping others make smart energy choices - and about each other. 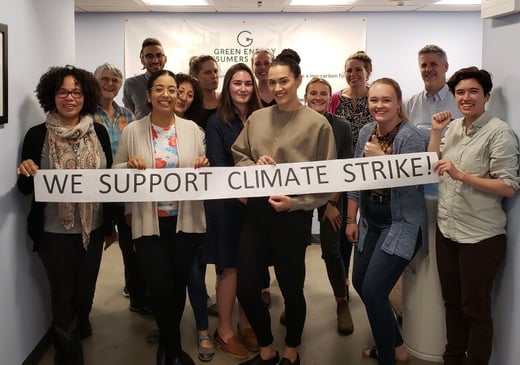 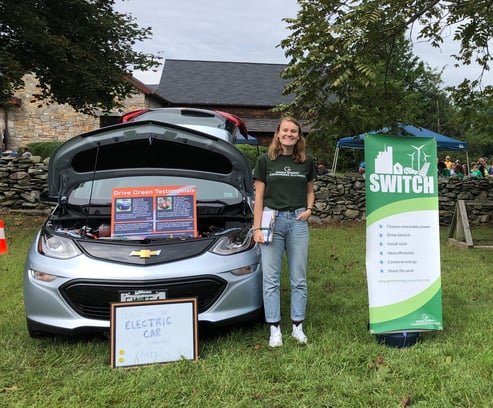 We do our best to share information in clear and helpful language. 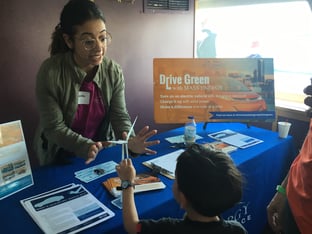 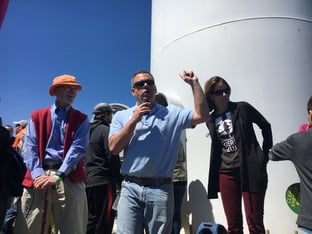 We practice what we preach (check out our green transportation blog). 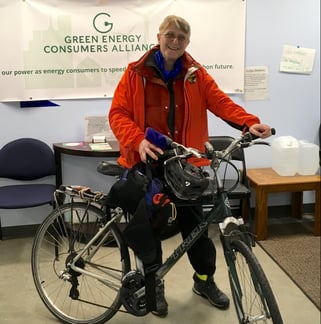 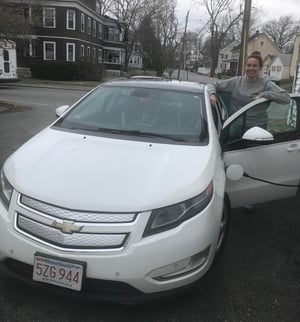 We use the powerful data from our programs and the voices of our participants to influence legislators toward climate-driven public policy. 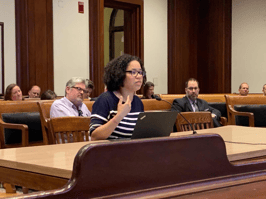 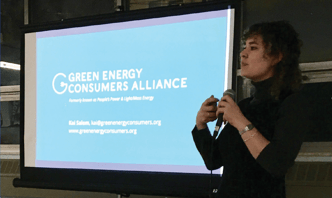 Our all-volunteer board has supported staff and strategically driven the mission forward at every turn. We're lucky to have people who are passionate about climate solutions governing our organization. 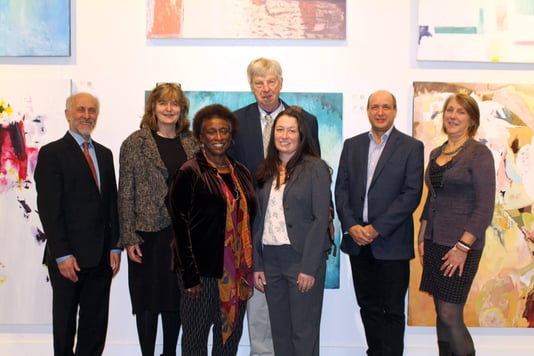 Get to know us better at http://greenenergyconsumers.org/staffboard

Wishing everyone a happy and safe Thanksgiving!

Our specialty is aggregating the power of energy consumers to activate changes in their lives and in the climate policy that affects and protects us all. On the advocacy side, we work with some amazing groups.

Today we’re grateful for the legal eagles at the Conservation Law Foundation. CLF has been around for decades, advocating for a better environment throughout New England. They know all about science, markets, and policy, but on occasion they  wisely use their legal expertise on behalf of the public good.  CLF could be honored for many things but here we will highlight two things.

In 2008, the legislature passed the landmark Global Warming Solutions Act which called for declining aggregate emissions of greenhouse gases, with specific targets for 2020 and 2050. The GWSA required the executive branch to write regulations that would put the legislative mandate into force. Unfortunately the administration failed to produce the required regulations according to the law’s timetable. CLF came to us at Green Energy Consumers Alliance and asked if we would be a co-plaintiff in a lawsuit against the Commonwealth for failure to act. Our board of directors gave CLF’s request some thought and agreed.  In May 2016, the lawsuit was heard by the Massachusetts Supreme Judicial Court and the SJC voted unanimously in favor our complaint!  Below is a photo of Attorney Jenny Rushlow as she presented her case to the SJC. 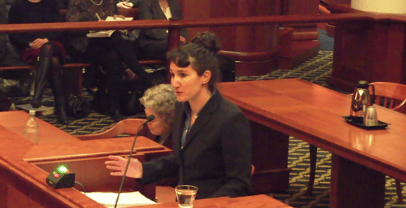 To this day, our executive director often says that our decision to join CLF in that lawsuit was one of the best decisions we ever made.

A Chicago-based company called Invenergy proposed a $1 billion natural gas power plant in Burrillville, Rhode Island. Admittedly, Green Energy Consumers did not play an active role in opposition to the project but we applaud the efforts of all those who were in the trenches. CLF was a key player in support of local and statewide community activists.  After a four-year battle, the state finally decided to deny the application, based largely on the arguments laid out by CLF, particularly by Attorney Jerry Elmer. As Jerry recently said, “The case is over.  Invenergy lost. The climate won.”

Sometimes the lawyers are the good guys. 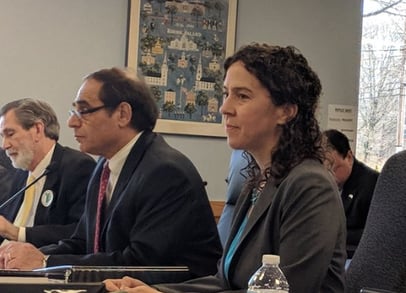 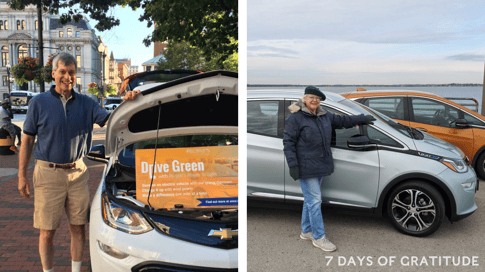 We're grateful for our awesome Electric Vehicle ambassadors like John & Claire Fitzmaurice and Joel Gates. We know that when people talk to real electric car drivers, they're more likely to make the switch. So thank you to all our EV Ambassadors. Your volunteerism is incredibly helpful and inspiring. 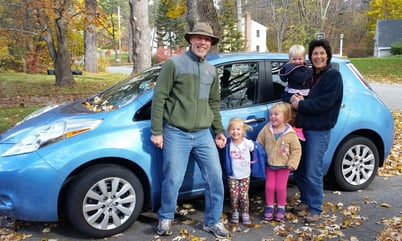 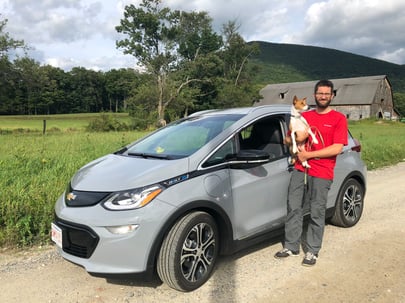 Utah Ni with his Chevy Bolt 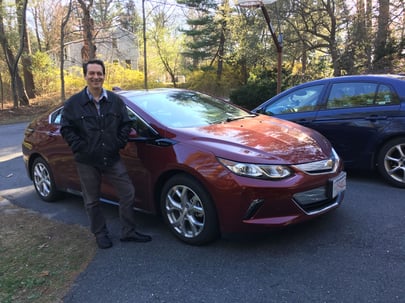 Craig Maiman with his Chevy Volt 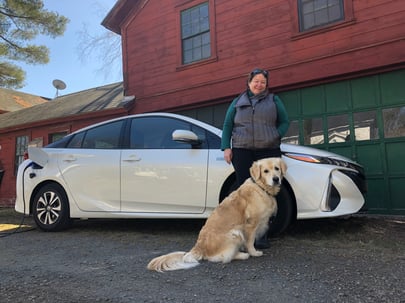 Joan Walsh with her Prius Prime

Peter Viner-Brown with his Nissan LEAF 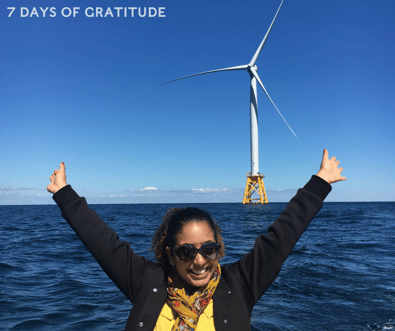 We're grateful for the Block Island Wind Farm - the first offshore wind farm in the United States, located 3.8 miles to the southeast of Block Island, RI. The BIWF consists five wind turbines of 6.0 megawatts each.

The project was developed by a Rhode Island-based company, Deepwater Wind, which was subsequently acquired by Orsted, a large Danish company. Denmark has been one the world’s leaders in wind power for many years.

According to Orsted’s website, Block Island Wind Farm generates approximately 125,000 MWh of clean energy a year, which is enough to serve approximately 17,000 households! About 300 local workers were involved in the construction. 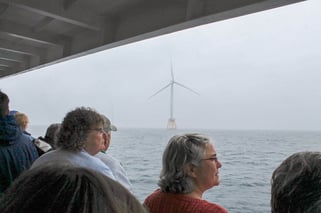 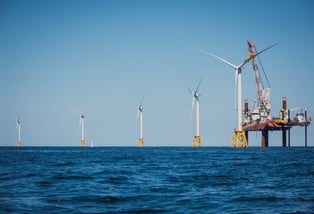 We appreciate the project for the very direct environmental benefits that it creates. However, the much larger impacts of the projects are indirect and we are beginning to see them the unfold. This was the absolute first off-shore wind project in America. As a nation, we are way behind many others.

The Block Island project has inspired other projects in New England that will be built in the coming years. Orsted is building a much larger project – Revolution Wind – for customers in Rhode Island and Connecticut. Vineyard Wind is building a large project for Massachusetts, but permits have been delayed by the Trump administration. And Massachusetts has recently announced plans to contract with Mayflower Wind.

Make no mistake. In order to reduce greenhouse gas emissions sufficiently, we are going to need lots of off-shore wind power – more than the projects listed here will provide. So we will need to keep going. But a few years from now, we will all be able to look back and remember how the Block Island Wind Farm got us started. 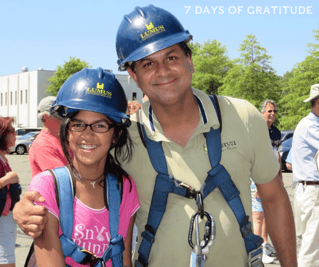 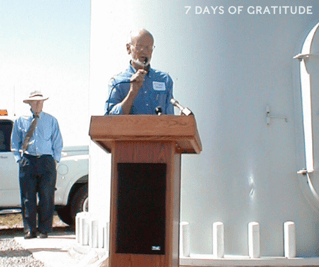 Our Green Powered and Green Municipal Aggregation programs demand that we purchase Renewable Energy Certificates (RECs) from Class I sources. We're thankful for all the renewable energy developers we work with, like Sumul Shah (pictured left with his daughter in 2014) and Malcolm Brown (pictured right).

Sumul has managed both the Scituate (1.5 MW turbine) and Gloucester (two 2 MW turbines) projects that are part of our REC portfolio. He is always willing to give a tour, and his enthusiasm is infectious. He leads tour-goers into the turbine and encourages them to "stand behind the ladder and look up" (and if you're curious, here's what that looks like). With Sumul's guidance, a few staff have climbed up to the Scituate turbine's nacelle. For such a climb, you must wear proper safety gear including a harness that clips on to the turbine's long inner ladder. 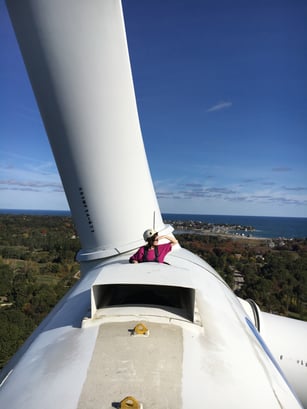 Our Yaima Braga taking in the view from atop the Scituate, MA wind turbine.

Malcolm Brown is a testament to the power of local climate action. He was a driving force behind the first community-scale wind project on the east coast in Hull, Massachusetts (referred to as Hull 1), organizing with others in the community to drive its development forward. Green Energy Consumers has supported the project since it came online 2002. The 660 kW turbine is smaller than some, but mighty. Sited at Hull High School at beautiful Pemberton Point, it has been so popular that the town added a second 1.8 MW wind turbine (Hull 2) in 2006 (read more history here). Since then, Malcolm has given us unwavering support and has welcomed hundreds to tour the Hull turbine. 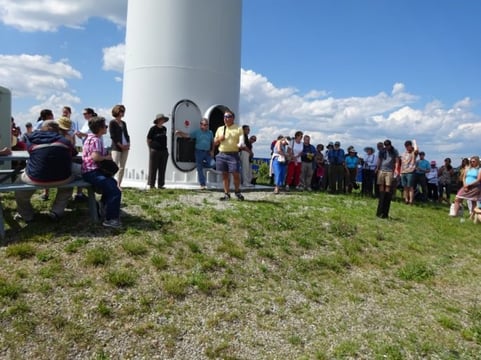 Thanks to Malcolm, Sumul, and countless other developers who've made small scale renewables happen in MA & RI. Check out more local renewable energy.

We're grateful for these stories to share and so much more. Thank you for your part in it!