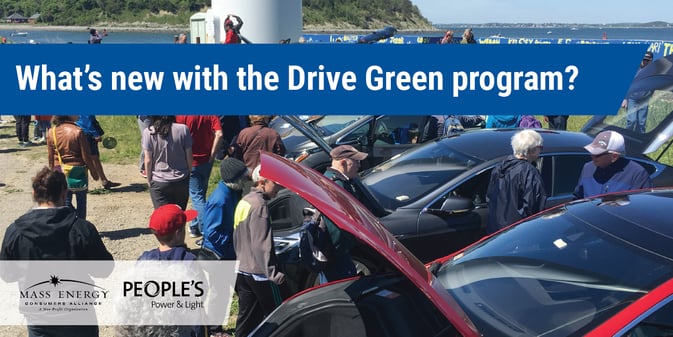 We launched Drive Green with Mass Energy and Drive Green with People’s Power & Light in November 2016 and have been rolling along merrily ever since. Here’s what’s new with our program and the world of electric vehicles (EVs) overall.

At launch, our program featured a few cars that were most available at the time, with the most popular being the Chevrolet Volt and 2016 Nissan LEAF. Shortly thereafter we added the Chevrolet Bolt. In recent months, we’ve added a whole new cast of characters: some all-electric (most recently, the 2018 Nissan LEAF!) and some plug-in hybrids. In general, the ranges are getting longer. And the prices are lower – after you add up the federal tax credit, state rebate (in Massachusetts), and our Drive Green discounts – than the average price of a new car in America.

All-electrics added since launch, in order of descending electric range

We have been working to add to our stable of dealers in Massachusetts and Rhode Island and now have over 20 dealerships participating. See the full list of cars and dealers (and current discounts!) here (for MA) and here (for RI).

We’ve built up a network of electricians

In addition to adding new car dealers to our Drive Green program, we have been developing a network of licensed and insured electricians with experience installing Level II Electric Vehicle Supply Equipment (EVSE), AKA 240-Volt chargers. Now when you sign up to test-drive a car, you can also sign up to be put in contact with a local electrician who can install a Level II unit in your home or garage. (If you already have an EV but are interested in being put in touch with an electrician, email us at drivegreen@massenergy.org or drivegreen@ripower.org with your zip code.)

Charging opportunities are increasing, and will continue to expand

As a result of the Volkswagen diesel scandal, Volkswagen has set up an organization called Electrify America, which will spend $1.2 billion in 17 metro areas outside of California (of which Boston is one!) in the next couple of years to build out public charging stations. In addition, Massachusetts is receiving $75 million and Rhode Island $4.1 million from the Volkswagen settlement to spend on environmental mitigation. Some of those funds will likely go towards building out public charging infrastructure. Meanwhile, companies like Chargepoint and EVgo are continuing to expand outside of this government support.

But even now, there are probably more public charging stations around than you think. Here’s the state of things according to the Department of Energy’s Alternative Fuel Data Center.

The electric utilities in both states are getting in the game as well. As we’ve written previously, National Grid and Eversource in Massachusetts have proposed the “Make Ready” model in dockets before the Department of Public Utilities (DPU), which would allow them to use ratepayer dollars to recover the costs of running electric lines to new electric vehicle charging stations. Eversource’s proposal of investing $45 million in 4,000 stations over 5 years has been approved, and the DPU is expected to approve National Grid’s proposal for $25 million over 3 years soon.

In Rhode Island, National Grid is studying several different approaches to introduce time-of-use electricity rates for EV owners, which would monetarily incentivize charging when overall electricity demand is low.  They are also proposing to build more charging stations. We’re actively working with National Grid and the state Public Utilities Commission on these concepts. Our partners in that effort include the Sierra Club, National Resources Defense Council, Conservation Law Foundation and some local organizations.

All of these steps mean that public charging will become more widespread and charging at home even easier in the next couple of months and years. We expect to see more stations pop up at workplaces and multi-unit housing complexes.

Electric vehicle showcases are a big part of what we do. Though you can always test-drive an electric vehicle on your own through our Drive Green program, we love to bring prospective owners together with current EV drivers and dealerships so that you can get all your questions answered in one place. Check the full list of upcoming events anytime here (for MA) and here (for RI).

But we still need better policies

The value of electric vehicles in fighting climate change and improving our public health cannot be overstated. Current state policies are not enough to get us where we need to go.

In Massachusetts, the MOR-EV state rebate is a wonderful tool to kick-start the EV market, but not sustainable in the long-term. In Rhode Island, the state rebate for electric vehicles, DRIVE, has not been funded since July 2017. While we support the rebates, we have been encouraging the utilities and state officials to implement time-of-use pricing to incentivize EV adoption and charging only in off-peak periods. In addition, we make the case for electric buses anywhere we can – most recently in listening sessions before the Department of Environmental Protection as the state decides how to use its Volkswagen mitigation funds. 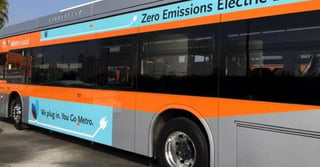 If you’re ready to charge forward with us (yes, pun intended), you can: