The Violence of Pollution: The Injustice of Rolling Back Clean Air Protections 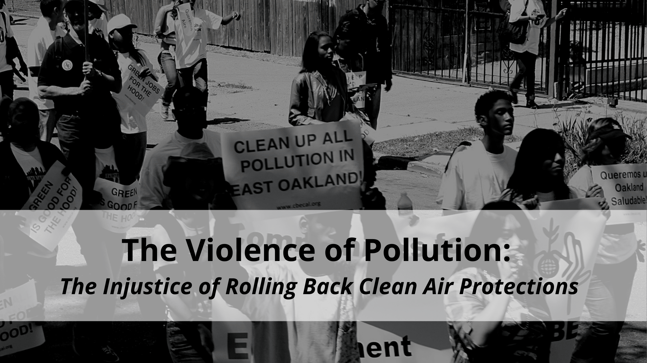 It is mid-June 2020 and another day of unrest in America. As I scan the news, I learn that the environment has been under attack. Again. President Trump recently signed an executive order to dismantle the process requiring environmental reviews of large infrastructure projects, including oil and gas pipelines. I also learn that the administration is proposing restrictions that would further weaken air pollution controls. As I dig more, I find out that it could get a lot worse for clean water too.

Sadly, I am not surprised. It has been 4 years of chipping away at environmental protections; it’s a long list covering everything under the sun, from vehicle efficiency standards to wildlife protection. I shut down my laptop and step outside. I need fresh air.

The health costs of air pollution

I first heard about the US Environmental Protection Agency (EPA) in college. My textbook featured the Clean Air Act and the other groundbreaking environmental protection measures that were adopted in the 1970s, next to pictures of rivers on fire and the Los Angeles skyline engulfed in smog. Those laws dramatically improved the lives of millions of Americans. For decades, the rest of the world looked to the US EPA to learn about environmental protection law.

The undoing of decades of environmental protection is a serious matter. It is also dangerous and expensive. Air pollution costs the US roughly 5 percent of its yearly gross domestic product, with the transportation sector alone being responsible for $150 billion in health costs. In 2018, the Center for Disease Control put the economic burden of asthma at more than $80 billion annually in medical expenses. It is estimated that tens of thousands die early in the US due to exposure to particulate matter pollution.

As I proceed to sign a petition asking the US EPA not to ignore the science on particulate pollution standards, I find it ironic that this deregulating frenzy is happening amid a respiratory disease outbreak that has killed almost 120,000 Americans.

If COVID-19 has taught us anything, it is that healthy lungs help people survive this virus. COVID-19 also taught us that ignoring science kills; ignoring air pollution science now does not bode well for us. And finally, COVID-19 showed the world what many of us already knew: pollution is unfair.

The injustice of deregulations

As pointed out in the Journal of the American Medical Association, poor and working class people—mostly Latino and African American—have been more susceptible to contract the virus and die from it due to the coexistence of economic and social inequities, but also health conditions that are made worse by chronic exposure to air pollution.

With the debate over racism and discrimination of all forms raging around the world, the environmental deregulations of this past week acquire a deeper, even more worrisome meaning because we know that they will disproportionately hurt some communities more than others. They will hurt the largely black communities of Louisiana’s Cancer Alley and other ‘sacrifice zones’ where emissions from petrochemical plants will go even more unchecked; they will hurt the Latinx and Indigenous communities living near coal-fired power plants; the list goes on.

Lately people have started talking about pollution as racial violence. Knowing what we know now, this is not a hyperbole. Pollution is violent because it inflicts physical injury and damage. It is racially violent because it disproportionately affects people of color. Eliminating environmental protections is nothing short of morally wrong because it perpetrates disrespect for communities already burdened by the violence of pollution.

What can we do?

The administration is set to ignore these recommendations, and EPA will decide on these standards following the close of the public comment period on June 29, 2020.  You still can—and should!—sign this petition to demand that science is taken into consideration.

Signing a petition may not seem to make much difference, but it does matter. It is about defending the EPA’s mission to protect the environment and the integrity of the institution. It is also about standing up for the scientists who want their research to be used to serve the greater good. And finally, it is about standing up for the ones who are struggling to breathe because of the injustice of air pollution.

This piece was initially written for the Union of Concerned Scientists by our staff scientist, Paola Massoli, research and policy analyst at Green Energy Consumers Alliance in Boston, Massachusetts.