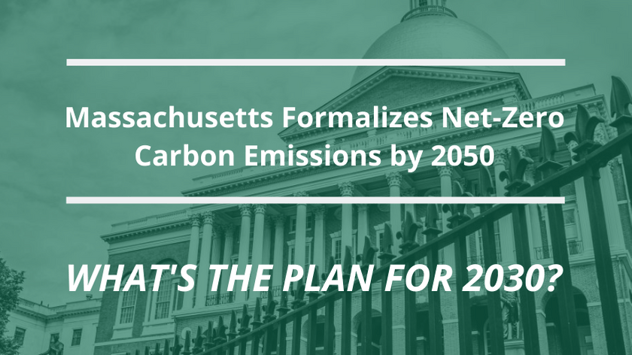 The Baker Administration recently issued its much-anticipated letter of determination formalizing Massachusetts’ commitment to net zero carbon emissions by 2050, a requirement first referenced in Baker’s 2020 state of the state address. Adjusting the GWSA to reflect scientific consensus and mandating pursuit of an ambitious long-term target is welcome news. But what does it mean for state-led clean energy and climate action in the immediate term?

Massachusetts to be Net Zero by 2050 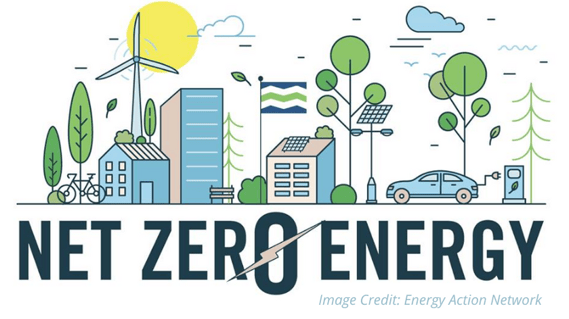 When enacted in 2008, the Massachusetts Global Warming Solutions Act (GWSA) established science-based greenhouse gas (GHG) emission reduction targets that were, at the time, nation leading: 25% by 2020 and at least 80% by 2050, both relative to 1990 levels. Twelve years later, there is definitive agreement that in addition to mitigating climate change in the near term, global emissions need to reach net zero by mid-century.

The realization that more must be done, faster, to combat climate change has been a factor behind a number of legislative efforts to adjust the 2050 limit and to set stringent interim emission reduction targets. It is also why Governor Baker’s assertion last January that Massachusetts must “take more decisive action” on climate change, along with a public commitment to net zero carbon emissions by 2050 was celebrated.

The letter of determination released on Earth Day makes the commitment to net zero official and defines compliance as follows:

A level of statewide greenhouse gas emissions that is equal in quantity to the amount of carbon dioxide or its equivalent that is removed from the atmosphere and stored annually by, or attributable to, the Commonwealth; provided, however, that in no event shall the level of emissions be greater than a level that is 85% below the 1990 level.

What does this even mean?

Despite broad support for “not less than 90%” and calls for 100% emission reductions by 2050, Massachusetts has settled on a definition that requires economy-wide GHG emission reductions of at least 85% (instead of 80%) below 1990 levels by 2050. Net zero will be achieved by removing the balance from the atmosphere. This does not preclude Massachusetts from reducing emissions beyond 85%.

To be clear, Green Energy Consumers Alliance supported the most robust 2050 limit possible. We were disappointed that the administration settled on 85% instead of 90% as the minimum limit for GHG emissions. However, we also recognize that focusing too much on perfecting a target that is three decades away can detract from the urgency of acting on climate today.

The real value of the new net zero limit for carbon emissions in the Commonwealth is that it establishes a legally-binding and enforceable mandate for GHG reductions that is more ambitious than was previously required. 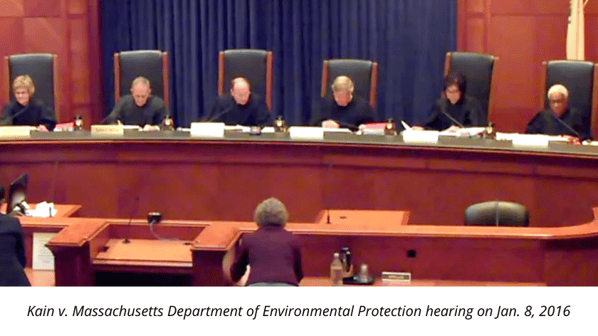 The long term mandate orients near term efforts, but it is the progress we make over the next decade that will truly determine Massachusetts' clean energy and climate trajectory over the next 30 years. The steps taken between now and 2030 to drastically reduce GHGs really matter. What is being done to substantially shift the way we make and consume energy? How do we equitably enable deep decarbonization across all sectors — from how we power, heat, or cool our buildings, to how we move from place to place — sooner rather than later?

That is why we are closely engaged in and monitoring efforts currently underway at EEA to develop a roadmap to decarbonization for 2050. Green Energy Consumers Alliance is a member of the state's Global Warming Solutions Act Implementation Advisory Committee (GWSA IAC) and, in that capacity, co-chairs the Climate Justice Working Group.

We are 8 short months away from determination of the 2030 GHG emission reduction target and the release of the Clean Energy and Climate Plan (CECP) for 2030. The CECP will provide the policy framework and a path to compliance for 2030 in the same way that the Roadmap to Decarbonization in Massachusetts will detail for 2050. 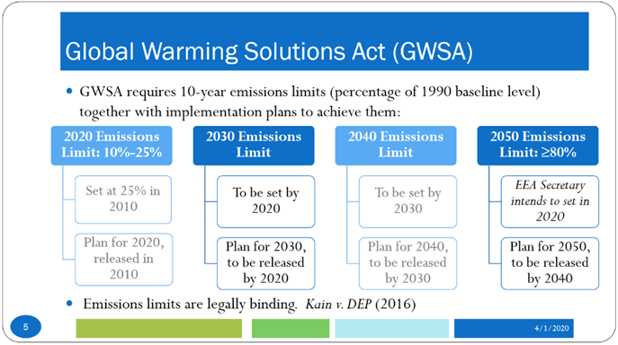 If events of recent weeks have taught us anything, it is the interconnection between health, the environment, and human activity. COVID-19 has cast into sharp relief everything from the impacts of human activity on our planet to the vast inequities that exist across communities, leaving some in Massachusetts more vulnerable to the worst effects of the virus (much like climate pollution) than others.

With this in mind, and with an eye toward 2030, we know that some strategies must be pursued even before modeling affirms their near term value.

Here are just a few that Green Energy Consumers Alliance is focused on.