The Unbearable Lightness of Energy Efficiency 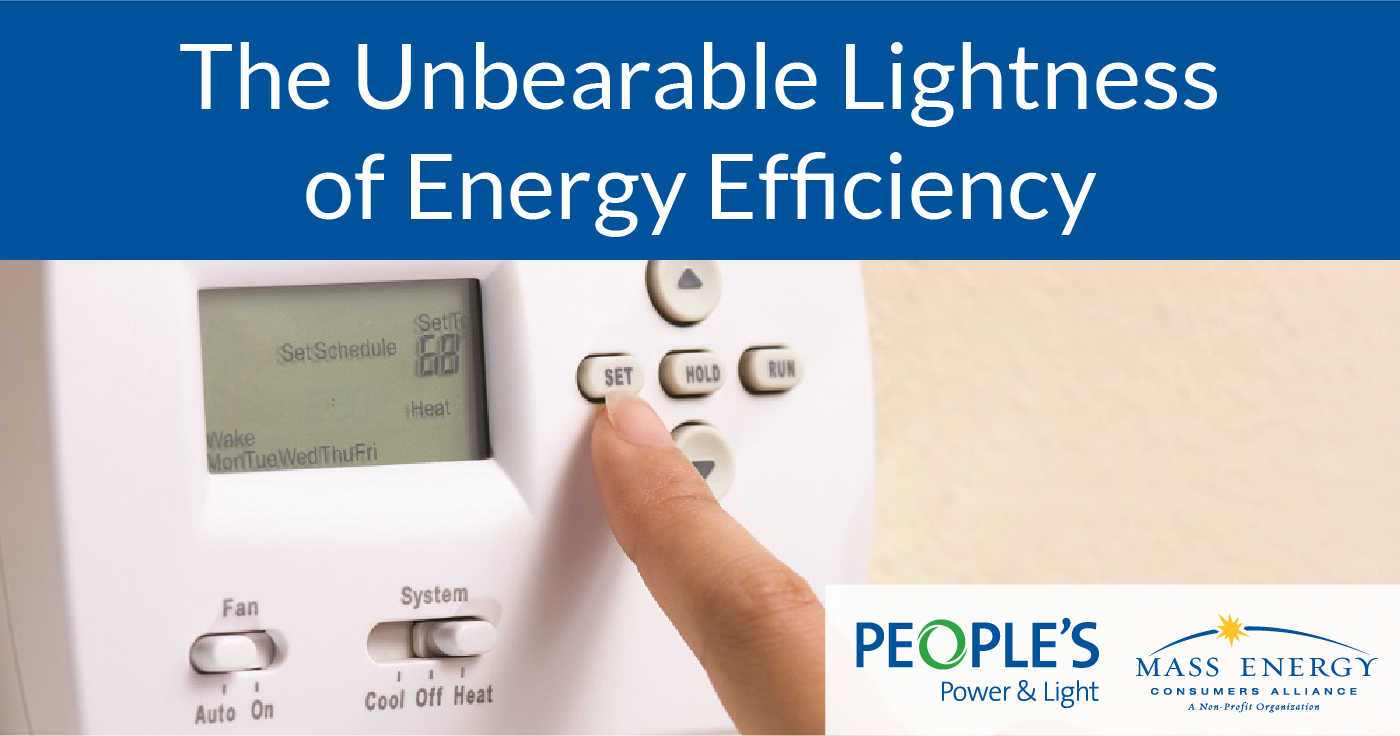 In a national ranking for energy efficiency, Massachusetts is number 1 and Rhode Island is number 3. Neither is doing enough. Please hear me out.

Both states have laws saying that efficiency programs (Mass Save in Massachusetts and EnergyWise in Rhode Island) should save as much as energy as possible if it costs less than buying electricity, gas, or oil. Technically speaking, that means if evaluations prove the benefits of efficiency outweigh the costs, we should keep saving right up to the point at which benefits and costs are equal.

The biggest financial benefit is the avoided cost of energy supply from natural gas, oil, nuclear, wind, and solar. Another big benefit is reducing greenhouse gas (GHG) emissions because both states have climate change laws on the books. Massachusetts has the 2008 Global Warming Solutions Act (GWSA) and Rhode Island has the 2014 Resilient Rhode Island Act.

The state laws guide us on the question of how much energy efficiency is “too much”. Neither state has passed legislation saying we just need to save more energy than, say, Alabama.

In both Rhode Island and Massachusetts, the efficiency programs have excellent benefit-cost ratios, well above the minimum requirement of 1.0. According to an annual report on the Rhode Island program, every dollar spent in 2016 on the efficiency programs boosted the Ocean State’s Gross State Product by approximately $4.20. This means we are underinvesting and leaving money on the table. The utilities and policymakers know this.

On February 28, the Massachusetts utilities presented on their preliminary results from 2017. Here are some facts:

In 2017, the electric efficiency program exceeded its goals but spent just 85% of its budget. We have seen this before – the utilities consistently overestimate the cost of saving energy.

This graph shows the history: 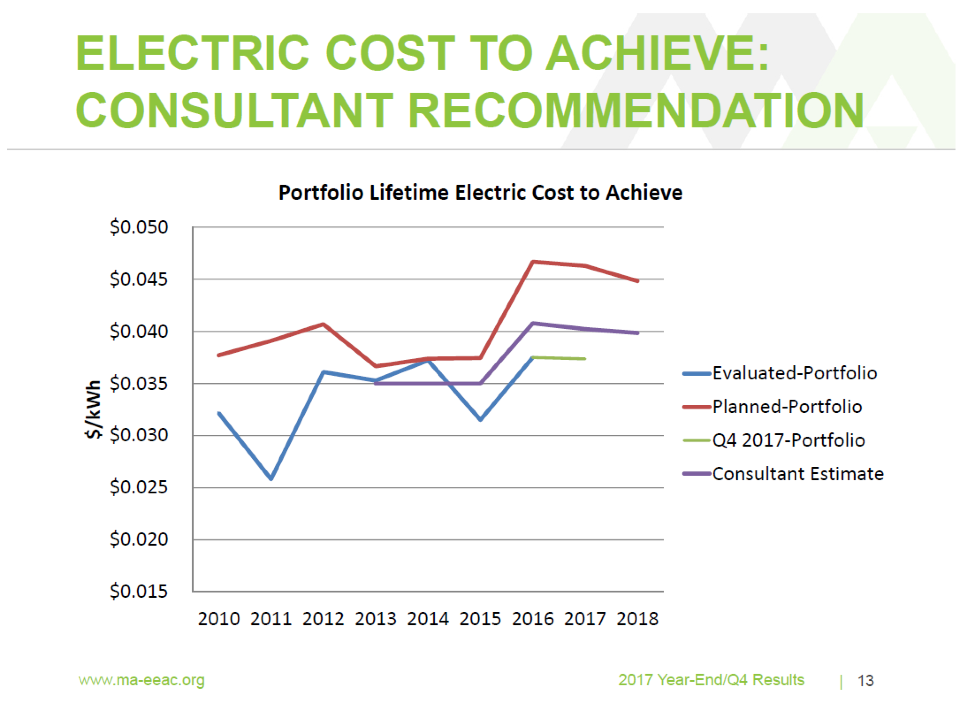 Look at the actual cost of less than four cents per kilowatt hour over the life of efficiency measures. That’s meeting our energy needs without emissions at a cost FAR LESS than fossil fuels or renewable energy. If the utilities spent the budget that was approved by the Mass. Department of Public Utilities, they still would not have captured all the savings costing less than supply. But we would have gained 15% more energy savings, reduced GHG emissions by 15% more, and achieved 15% more overall net benefits. Instead of saving that energy, we are all going to spend more on natural gas. The utilities and policymakers know this.

In addition to the need to equalize access, there are new opportunities available due to several new technological advancements. The basics of energy conservation like insulation and LEDs will continue to save us energy, but we can go deeper and in new directions.

For example, heat pumps have become more efficient in cold weather. Recent evaluations indicate they are more cost-effective for heating than electric resistance, oil or propane. In new, well-insulated buildings, they make more sense than gas heat. The heat pump market is growing in Vermont, Maine and Canada. But in Massachusetts and Rhode Island, we are just beginning to talk about heat pumps. Policy can transform the market.

The programs are not just about reducing energy consumption overall. They are also charged with reducing energy demand, meaning energy usage at a given point in time – particularly during periods of peak demand, say when all the lights and air conditioners are on. That matters because just ten percent of the hours in a year account for forty percent of the cost of electricity. And those are the hours when we are most likely to see spikes in various forms of air pollution.

Despite all that, programs to actively manage demand are just in the pilot stage (some measures like LEDs are great at reducing energy usage and passively reducing demand).

For active demand management, energy storage is now a particularly exciting opportunity, especially given the amazing drop in costs of lithium-ion batteries. Its potential now is absolutely much greater than when the AG’s study was released in 2015.

Massachusetts has some excellent demonstration projects in the works and is developing a larger policy. Let’s develop programs at the scale needed to really shave the peak.

Despite these opportunities and many more, there’s a drumbeat coming from the utility industry, some other businesses, some policymakers, the Boston Globe and the Providence Journal. They say we need more pipelines, financed by electricity ratepayers, so that we can import more fracked methane into New England. That might be good for utility shareholders, but it’s not for consumers, the overall economy, and the environment.

And here’s a statement from Captain Obvious: It’s easier to site energy efficiency than it is many things. Ask Cape Wind, Access Northeast, and Northern Pass.

Legislators would never vote to repeal the climate change laws because that would be bad politics. But they might as well if we fail to invest more in energy efficiency or cave into the utilities on the methane pipeline. The greenhouse gas math is undeniable. The utilities and policymakers know this.

I’ll end with this graphic from Massachusetts showing where our electricity payments go (Rhode Island is similar but spends less on efficiency & renewables). 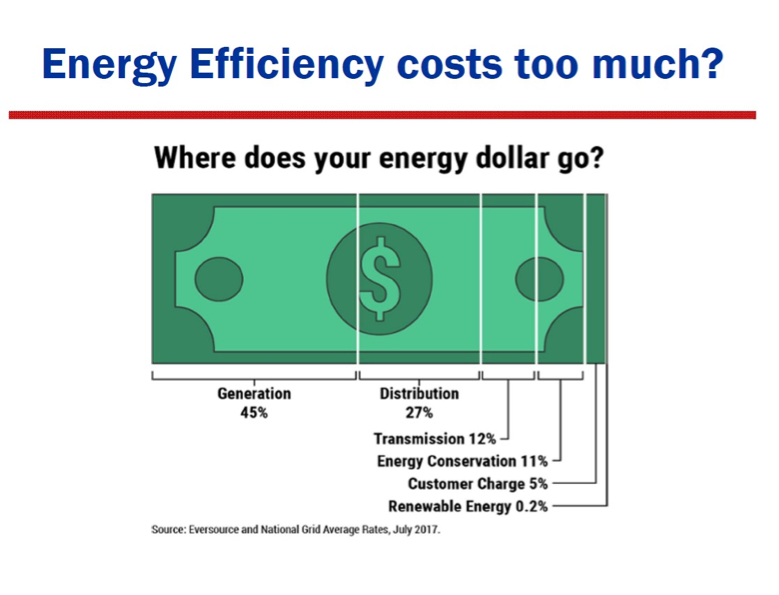