The EVs of the Seas - Cargo Ships, Sailboats, Yachts, and ferries 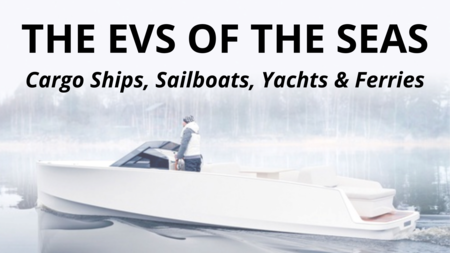 When we think of pollution and the emissions associated with transportation, planes, trains, and automobiles are often the first modes of mobility that come to mind. Cars in particular have been at the forefront of the electrification conversation, for good reason -- according to the EPA's 2017 report on US greenhouse gas (GHG) emissions, a cumulative 82% of transportation emissions came from passenger vehicles and medium to heavy duty trucks combined. (Transportation accounted for 29% of overall GHG emissions, so that 82% of transportation emissions translates roughly to ~24% of total GHG emissions.) We've written extensively on vehicle electrification, and our Drive Green program works to accelerate the transition to electric vehicles (EVs). Now we'd like to take a look at EVs nautical counterpart -- boats.

Boats have long played an influential role in the mobility of human society, from sailing us across oceans to ferrying us around cities. In fact, 90% of shipped goods are delivered to their destination by massive cargo ships. Ships contribute to 3% of the world's greenhouse gas emissions -- a similar contribution to the countries of Japan, Germany, and Canada. Both recreational boating and large cargo ships also significantly contribute to ocean acidification through the emissions of sulfur and nitrogen oxides from their tail pipes. When taking into perspective the number of major cargo ships roaming the oceans (some 90,000) compared to the number of cars on the road (roughly 1 billion), one can easily see just how dirty our ocean vessels truly are. The good news is: the transition to electric water transportation has begun.

At this point, you might be wondering: how exactly can an electric battery and motor work in a machine that is, well, submerged in water? Just like EVs, electric boats power a purely electric engine with a large battery bank that is usually comprised of lithium-ion batteries that have simply been "marinized".

Electric boat batteries need to be much more energy-dense than electric car batteries, since a boat needs more power to travel similar distances with the added resistance of water rather than air, and does not have the luxury of stopping to recharge mid-trip. At this time, existing lithium-ion batteries can power small boats easily, but bigger ships would require tens to hundreds of lithium-ion batteries to be viable modes of transportation. With all that said, what exists and what's coming next?

Smaller personal-use boats, such as sailboats, leisure boats, and yachts, are making the most progress on electrification. Innovation is not as streamlined or universal as it is in the automobile industry, since boats are bought and used more sporadically than cars and for very different purposes than simply traveling from points A to B. Sailboats are favorable to turn electric, as minimal motor use is required already to maneuver these ships, and therefore the perfect candidate for solar powered engines. For example: the company PlanetSolar became the first organization to circumnavigate the globe on solar energy alone in 2010, completing the journey in 585 days strictly on energy generated by some 500 solar panels. 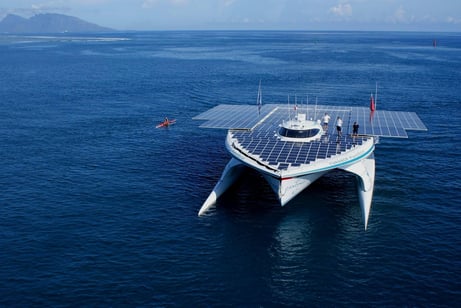 Leisure boats, such as pontoons or Duffy boats, are also relatively easy to electrify because they too do not require a significant amount of energy. In fact, Duffy boats, a famous leisure cruising vessel, have been electric for over 50 years and are beloved for their smooth, silent ride. Yachts and power boats are the vessels proving to be the most difficult to electrify due to their size, average speeds driven, and relative use of power for quick acceleration. Regardless, large strides are being made in the market of sustainable yachts, thanks to investment of boating companies and even the participation of some car-makers, like BMW. Two particularly interesting boats breaking into the largely untapped niche of sustainable yachting are the company X Shore's 26-foot Eelex 8000 and Eolord 6000. These yachts are allegedly so quiet that they have been deemed similar to "sailing without the wind". The Eelex 8000 boasts a 220-kWh electric engine and a range of 70 nautical miles. (In comparison, a Chevrolet Bolt with a 66 kWh electric engine has a range of 259 miles.) Both ships were recently launched in Europe, and will be available in the US by 2021. 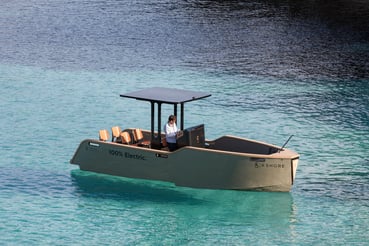 If sailboats, yachts, and small leisure boats are the seafaring equivalent to cars, then ferries are the nautical equal to buses. Like buses, ferries travel pre-calculated routes consistently. Thus, ferries are prime candidates for electrification because the charge and battery capacity required for the calculated distances they travel is pre-determined and predictable. We've written about how much emissions can be reduced by simply electrifying bus transit systems, and the same principal goes for ferry taxi systems. 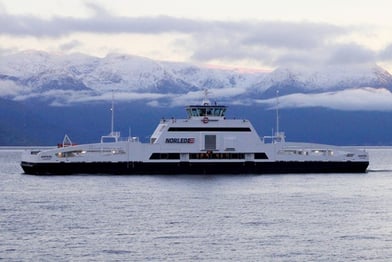 The first all-electric ferry named the Ampere launched in Norway in 2015. After two years of operation, the Ampere cut emissions by 95% and service costs by 80%. Another ferry that was recently launched in Norway, called the Ellen, is the largest electric ferry in the world.The Ellen has been deemed "the Tesla of ferries" because of its 22 nautical mile range - a major feat for such a large vessel. The Ellen's operating organization estimates that the ferry reduced emissions by 2,000 tons of CO2 per year and boasts operation costs that are 25% of a traditional diesel ferry within its first years of operation. Scenic Niagara Falls will be one of the first places in the United States to take advantage of electric ferries, as the famed "Maid of the Mist" tour at the park will operate with four new all electric vessels. No electric ferries are operational in any US cities just yet but talks of mobilizing such vessels in Seattle, New York, and San Francisco have hinted at their debut in the near future. 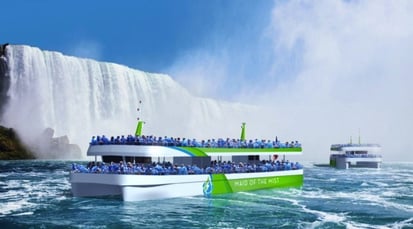 Cargo ships are the heavy duty trucks of the sea, traveling thousands of miles hauling as much as 30,000 tons of cargo in a single journey. The need to electrify these monstrous ships is pressing, as the 15 largest container ships emit more nitrogen and sulfur oxide pollutants than all the world's cars combined. Due to power needed to propel cargo ships thousand of miles through the oceans on only an initial fueling service, electrifying these types of ships has proven difficult. For reference, an average cargo ship engine has about 1,000 times more power than a family car, is nearly a quarter mile long, and has an engine that weights 2,300 tons. At this time, lithium-ion batteries are not powerful enough to move boats as large and heavy as cargo ships. To power a massive vessel, thousand of lithium-ion batteries would need to be interconnected in a single power chamber located deep within the hull. This battery system would add a lot of weight to the ship and take up crucial space, limiting the amount of cargo it would be able to carry. At this time, the goal of electric cargo ships is still far off as engineers are tampering with new types of battery power sources. Many people believe the future of zero-emission cargo shipping will rely on hydrogen fuel cells instead of lithium-ion batteries. 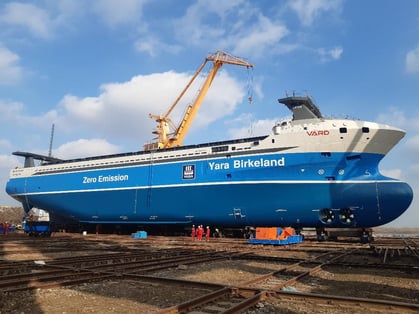 With that said, one cargo ship has been successfully created and launched for operations in Norway: the Yara Birkland. Commissioned by a Norwegian fertilizer company of the same name, it is expected to take its maiden voyage sometime in 2020. The vessel is expected to reduce emissions by eliminating 40,000 trips each year that would otherwise be made diesel trucks and has a battery pack equivalent to 90 Tesla Model S, with a capacity of 7 MWh. While the Yara Birkland is an impressive feat of engineering, it is a rather small cargo ship. An average ship carries 150 times as many boxes, travels over three times as fast, and across 400 times the distance as the Yara Birkland. Regardless, the Yara Birkland marks an exciting development in the engineering prospects of electric cargo ships that makes the outlook of future developments all the more promising.

Similar to electric vehicles, electric boats, ships, and ferries play a major role in decarbonizing our economy, and speeding the transition to a low carbon future. Electric vehicles are an excellent example of how amazing technological strides can be made swiftly. For example, Tesla has been able to increase the range and 0-60 mph speed of several of their models by roughly 50% and 35% within the past ten years alone. If innovators can make that much of an improvement in electric cars technology over the course of a decade, we certainly are capable of making significant advancements in electric nautical engine technology in the same amount of time. So, keep your eyes on the horizon, for the electric boats are coming and you might just take a cruise on one sooner than you think.