The Code is the Key 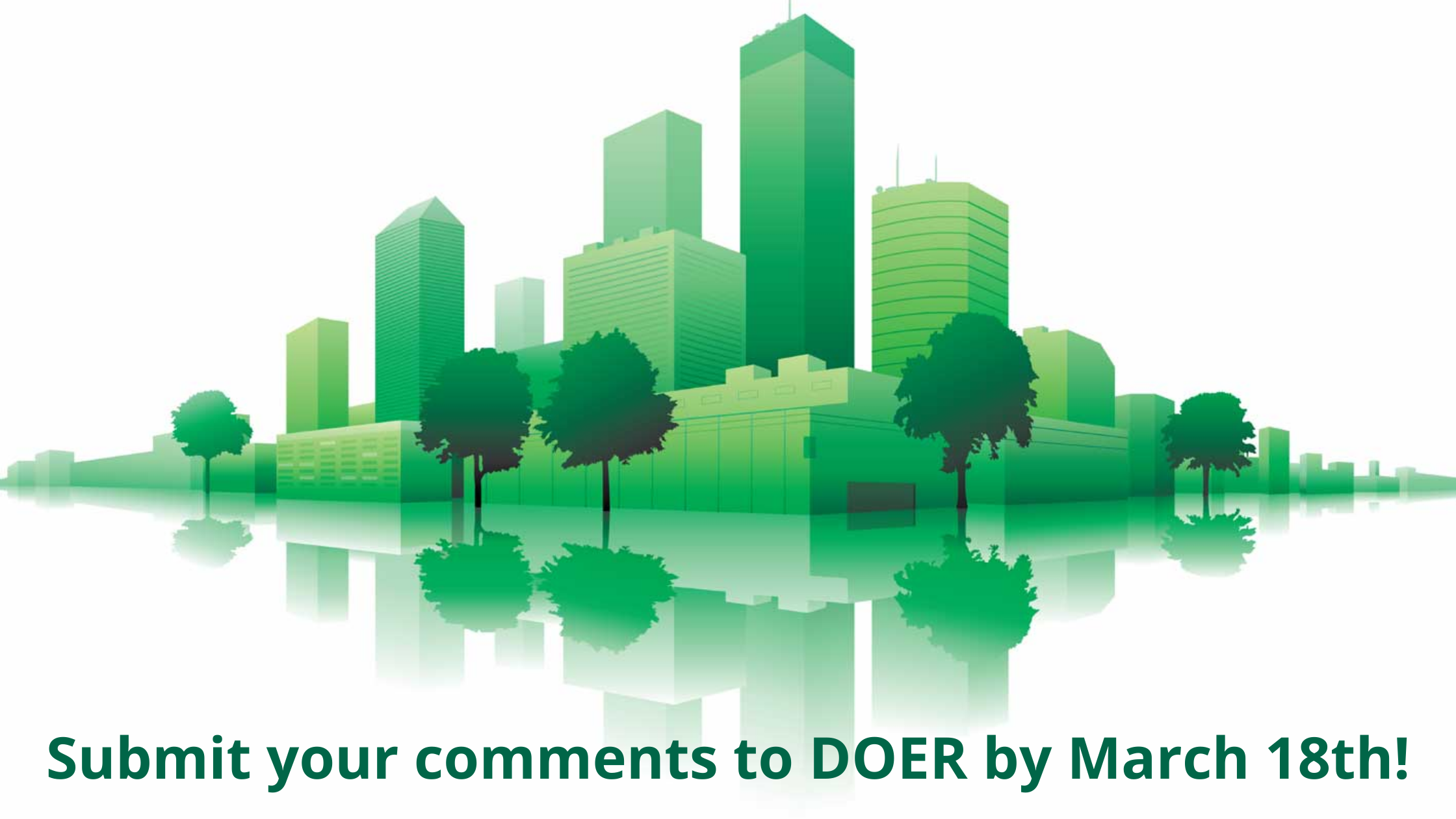 A couple of weeks ago, we wrote that DOER had announced its proposed regulations to up the energy requirements in Massachusetts’ base and stretch energy codes. DOER has also proposed a new “specialized opt-in,” which municipalities may choose to opt-up to and which complies with the Climate Roadmap Statute’s requirement for a definition of net-zero to be added to code.

The Power of Building Codes

Massachusetts needs a plan to address the 34% of our emissions that come from buildings, primarily from gas and oil heating. Massachusetts’ energy efficiency plans are consistently ranked among the best in the country. But utility program incentives for weatherization and efficient equipment can only go so far. As we work to reduce emissions from our existing buildings, we need to stop making the problem worse with new construction that is inefficient and powered by fossil fuels. It is time for an update to our building code that ratchets up the efficiency of any new building in Massachusetts.

Like appliance standards, building energy codes reduce emissions by taking away the option of inefficiency. All new construction (and in some cases, substantial renovations) must meet minimum standards of energy efficiency, just as they must comply with safety measures. Our current building code in Massachusetts has helped our buildings become much more efficient over the last couple of decades.

Ensuring that new buildings are efficient and fossil-fuel-free makes a lot of sense. New buildings are the cheapest and easiest to decarbonize because there’s no waste in replacing an old heating system. It’s currently cost-comparable in Massachusetts to build a net-zero building. Plus, a new fossil fuel heating system could last for decades, making it impossible to meet our 2050 net-zero climate goal.

The large majority of communities in Massachusetts have seen the value of efficient buildings and have opted up to a higher standard: the stretch code. And last year’s Climate Roadmap bill initiated the creation of an even greener code with a “net-zero definition” for the communities that want to go above and beyond. As the success of Green Municipal Aggregation has demonstrated, the most ambitious communities are leading the whole Commonwealth towards achieving our climate goals. This net-zero code opt-in gives Massachusetts’ most ambitious communities tools to go even further towards all-electric buildings.

Last year’s Clean Energy and Climate Plan suggested that building codes, if designed right, would lead to 1 million tons of greenhouse gas emissions avoided per year, making them an important piece of meeting the overall Draft CECP goal of 9.4 million metric tons of CO2e reduced per year form the building sector (note: this number will likely need to be increased to meet the new climate targets of 50% emissions reductions by 2030).

But the codes proposed a few weeks ago would only avoid 500,000 metric tons of GHG, half of what the CECP assumed, the fact that the CECP still needs to be updated notwithstanding. How will the administration make up that gap? Our last blog on the subject suggested that the CHC must figure it out with policies to reduce emissions from existing buildings, like performance standards or a Heating Fuels Emissions Cap. In this blog, we suggest additionally that tweaking the proposed building code could help us reach that 1 million metric tons of GHG goal—or even more.

It is clear that DOER dropped the ball on this one. Rather than designing an opt-in net-zero code that helps Massachusetts moves towards a fossil fuel-free future, it proposes two options for buildings to meet the “net-zero” requirement—a new building may either be efficient and all-electric or be extra efficient and have on-site solar while maintaining fossil fuel heat systems. This strategy to allow fossil fuels might be okay for a stretch code, but it is not a net-zero code. It goes against the intent of the Roadmap Bill, which called for a net-zero definition.

We encourage you to check out the comments of the MA Net Zero Stretch Code Coalition for even more detail on the codes and how they could be improved.

Send your comments to DOER!

We need strong code updates to be put in place this year that lay the path for meeting the 2030 climate goals. The current proposal gets us farther from that goal than was proposed in the draft CECP.

This year’s changes to the building codes should:

Email your comments to stretchcode@mass.gov with the subject line “Stretch Code Straw Proposal Comments” by Friday, March 18th at 5 pm to make your voice heard!