Governor McKee, Rhode Island needs you to sign the Act On Climate

Last week was a huge step forward for climate action in New England.

In Massachusetts, Governor Baker signed the Next Generation Climate Roadmap bill, which accelerates Massachusetts existing emissions reductions mandate and lays a clear path forward on achieving the ambitious targets of 50% reductions by 2030 and net zero by 2050.

In Rhode Island, the General Assembly passed a climate bill for the first time since the Resilient Rhode Island Act in 2014. The 2021 Act On Climate (H5445-Sub A and S78-Sub A), sponsored by Senator Dawn Euer and Representative Lauren Carson, would accelerate our pace of emissions reductions and lay a framework for how we can meet our climate goals in the most cost-effective and equitable way possible. This bill has passed the Senate and House; it’s now up to Governor McKee to sign.

Green Energy Consumers Alliance calls upon Governor McKee to take the example of Governor Baker and sign this crucial climate legislation into law without further delays or weakening the provisions. *

Although Rhode Island should have passed mandatory carbon emissions reductions years ago, it’s not too late for us to get back on track to addressing the climate crisis. In fact, Rhode Island could jump to the head of the pack when it comes to climate action by passing key legislation into law before the end of this legislative session, starting with the Act On Climate. In an upcoming blog, we’ll dig into the other proposed legislation that will implement the Act On Climate’s goals.

*April 8 Update: Governor McKee has announced that he will sign the Act On Climate into law! This is really exciting news for Rhode Island. With this landmark legislation passed, we will turn our attention to other policy priorities that will help the State implement the goals established by Act On Climate.

Why we must act on climate

Rhode Island cannot wait to act on climate. Here in the Ocean State, we care deeply about the climate crisis. We are already feeling the changes to our climate and natural resources, whether its shrinking beaches, different fish swimming in our waters, or the increasingly hot summers and weird weather patterns. In fact, Rhode Island has experienced more warming over the last decades than any other contiguous U.S. state. 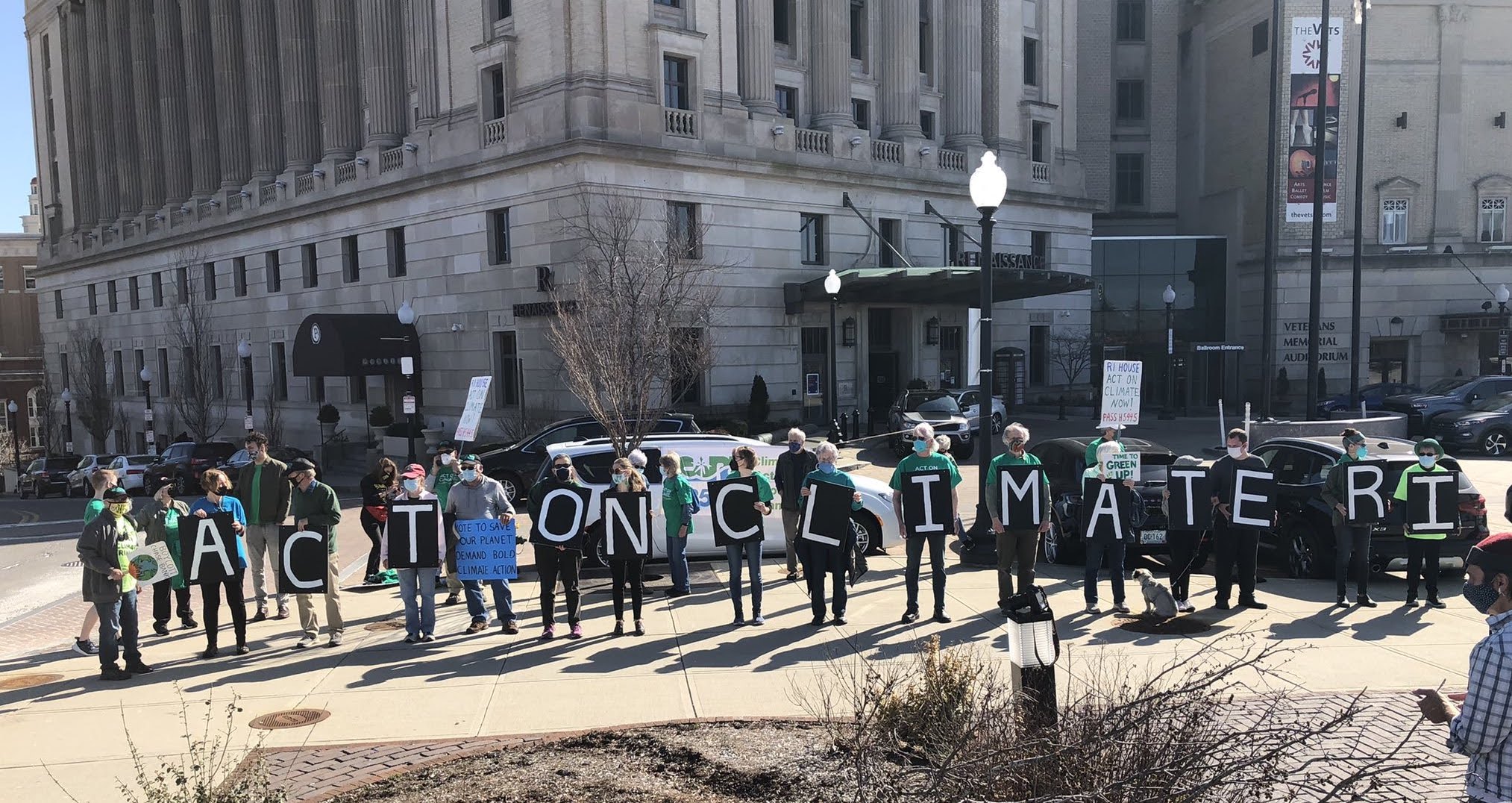 We also can’t wait for the good, green jobs or improved energy system that climate action will bring. The green energy sector is one of the fastest growing sectors of the economy; this sector is poised to ramp up over the coming decade as offshore wind projects create job opportunities across the region, but especially in Rhode Island, where we have a history of marine industry.

By the end of the decade, electric vehicles will be a cheaper option upfront than gas cars; they’re already cheaper to own because of the reduced cost of fuel and lower maintenance needs. Several automakers, including General Motors, have committed to converting to entirely electric vehicles in the next fifteen years.

At the federal level, the Biden administration has announced plans to move towards massive expansions of renewable electricity, especially in New England where offshore wind resources are abundant. Currently, Rhode Island is on track to be stuck with expensive, polluting, and inefficient cars and buildings if we don’t act now.

The Act On Climate will keep our government accountable to their promises to protect Rhode Islanders from the climate crisis. The bill sets updated greenhouse gas emission reductions targets of 45% by 2030, 80% by 2040, and net zero by 2050 compared to 1990. The bill also requires that the state kick off an inclusive process to develop a plan for programs and policies that would achieve these targets; this plan is due by the end of 2025.

It further ensures that the plan will prioritize environmental justice communities and workers in our energy transition. This legislation as written will unlock the policies and programs we need to ensure that Rhode islanders have access to affordable, clean and efficient vehicles, electricity, and buildings.

We’re concerned because Governor McKee asked the RI House of Representatives to consider passing an amendment that would remove the accountability mechanism from the Act On Climate. This amendment would defeat the intention of the bill, which is to provide Rhode Islanders with the power to ensure that Rhode Island creates a plan to address the climate crisis and sticks to it over the next thirty years. Accountability is crucial to ensure Rhode Island’s long-term commitment to climate action. 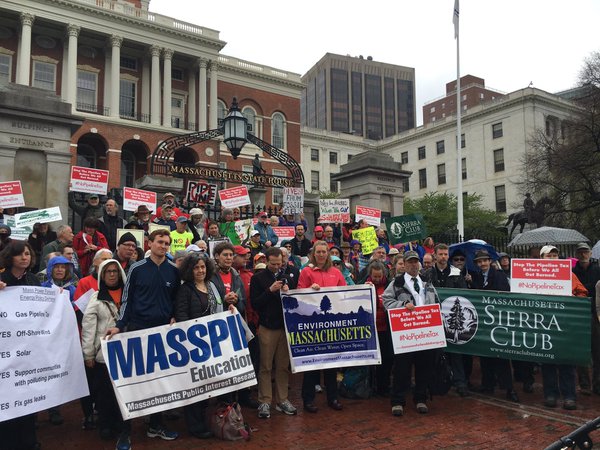 Don’t just take our word for it – we know from our experience in Massachusetts that legislation like Act On Climate is a crucial tool to transition to the clean energy future.

Our experience in Massachusetts shows us that Act On Climate will work to fight the climate crisis.

Massachusetts passed comparable climate legislation with the 2008 Global Warming Solutions Act. This bill has kept the Massachusetts government accountable to meeting its climate targets. It set a minimum level of required emissions reductions, including 20% reductions by 2020 – a target that the state met – and 80% by 2050. In the latest climate legislation, which Governor Baker signed into law last week, the state has upped its ambition to 80% by 2040 and net zero by 2050, the same targets contained in Rhode Island’s Act On Climate.

Massachusetts’ strong 2008 climate legislation has led to the growth of a nation-leading clean energy economy. Since passing this bill, their energy efficiency programs have consistently ranked first in the nation; their investments in solar and electric vehicles have far surpassed Rhode Island; and the state’s commitment to clean energy has supported booming energy industries.

The accountability component of this legislation is crucial to its successful implementation. Green Energy Consumers Alliance was a participant in the only lawsuit brought to enforce the Global Warming Solutions Act. Under the name Mass Energy, we were a plaintiff in this landmark case, Kain v. Massachusetts Department of Environmental Protection. In 2016, the Supreme Judicial Court concluded that the Massachusetts government is obligated to reduce emissions in accordance with the Act. This action resulted in a series of regulations that are helping Massachusetts reduce its carbon emissions faster than required by law.

Green Energy Consumers Alliance and our colleagues at the Conservation Law Foundation (pictured here) were involved in the 2016 court case to keep Massachusetts on track for its climate goals. There has only been one such lawsuit filed. This accountability is a necessary provision of the Act On Climate bill in Rhode Island.

Our experience in Massachusetts demonstrates that climate goals work to accelerate the green energy economy and reduce emissions – as long as they have built-in accountability. Enforceable climate targets do not result in an influx of spurious lawsuits. Instead, they give state residents the opportunity to make sure that our government is doing its job to keep us safe from the impacts of the climate crisis.

Rhode Island has waited too long for our own version of the Global Warming Solutions Act. Governor McKee has the opportunity to accelerate our climate action and demonstrate the Ocean State’s commitment to environmental and community protection. We call on our lawmakers to make sure that Act On Climate – as written and passed by the General Assembly – becomes law as soon as possible.

Your help will ensure that Act On Climate is signed into law without delay. Take five minutes to:

Governor McKee needs to hear that Rhode Islanders want the Act On Climate passed as it is, without any additional amendments. We need you to sign this petition to make your voice heard. Nearly 700 Rhode Islanders have already signed; will you help us get to 1,000?

"Hi, my name is [NAME] and I'm from [CITY/TOWN], Rhode Island. I'm reaching out to voice my support for Act On Climate. I urge Governor McKee to sign the bill as is, without any additional amendments or changes. I am counting on Governor McKee to be a leader on climate by signing this bill promptly. Thank you." 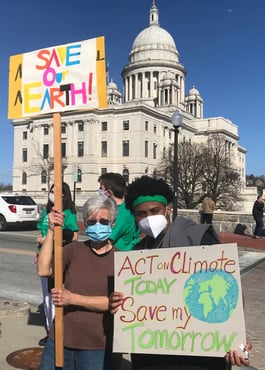 Opponents of climate action are doing their best to influence the Governor to remove the teeth from Act On Climate. The more Rhode Islanders who voice their support for this bill, the more likely it is that we can overcome the intense pressure from opponents.

Forward this blog to your friends, colleagues, and family members who are concerned about the climate crisis. This is a crucial moment to make sure we are on track to a liveable future for Rhode Island. We need you, and thank you for your support.