Electrifying cars, buses, and trucks will save lives. Why wait? 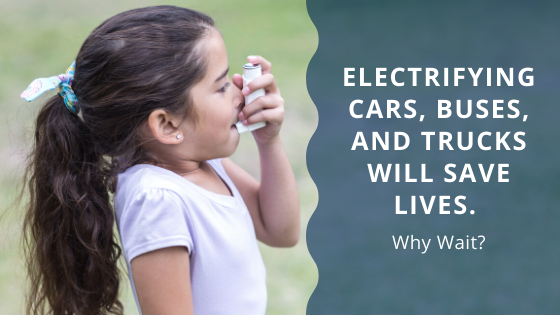 When we talk about the intersection of transportation and the environment, we’re often talking about greenhouse gases, like carbon dioxide and methane, that trap heat in the atmosphere and warm our climate. However, the combustion of fossil fuels also releases co-pollutants – like nitrogen oxides, sulfur oxides, and particulate matter – that form ozone and smog and make air unhealthy. Unlike greenhouse gases, which contribute to global climate change no matter where they’re released, co-pollutants have the biggest impact in the communities close to where they’re emitted.

Cars are a leading cause of climate change in New England, but their tailpipes are also responsible for worsening public health; two new reports from the American Lung Association and T.H. Chan School of Public Health at Harvard prove why we can’t afford to ignore them.

You can think of a gas-powered vehicle as a mobile powerplant that spews out co-pollutants wherever it goes. Ozone and particle pollution emitted from tailpipes increase risks of asthma, lung cancer, and respiratory infections (including COVID-19) for both adults and children.

The burden of air pollution is not distributed equally across the population. People of color are more likely to live in neighborhoods near highways and congestion, and therefore more likely to be exposed to unhealthy air. This leads to huge gaps in health outcomes between white people and people of color, compounded by other inequalities like reduced access to healthcare and lower household income. In other words, although we all put up with noxious tailpipe fumes to some extent, the impact is measurably worse for communities of color.

Electric vehicle adoption is a strategy to save lives

Electric vehicles improve air quality because they don’t have a tailpipe, so they shift co-pollutants away from populated areas. Cutting tailpipe emissions from the millions of vehicles on the road will reduce exposure for millions of people instantly. In a recent report, the American Lung Association has found that electrification of our nation’s cars, buses, trains, and trucks would avoid 6,300 premature deaths, 93,000 asthma attacks, and 416,000 lost work days. This amounts to reaping $72 billion in health benefits by 2050.

Although the carbon dioxide emitted from gas-powered vehicles isn't a direct threat to human health, it's a prime contributor to hotter days, which accelerates the formation of ground-level ozone and smog, known contributors to poor health outcomes. Also, because EVs emit fewer greenhouse gases than gas-powered cars do, electrifying our transportation system would save society an additional $113 billion from having a more stable climate. (This number factors in effects like sea level rise and subsequent land loss and changes in agricultural productivity.)

States like Rhode Island have set ambitious goals to transition to 100% renewable energy, but we don’t need to wait until 2030 to start to realize the health benefits of electric cars. They already reduce climate-warming emissions by 75% for every mile driven and will improve local air quality for every gas-powered car they replace.

TCI will speed the transition to healthy air and livable climate

Right now, we have an opportunity to accelerate electrification and realize these public health benefits. The Transportation & Climate Initiative (TCI) is a regional policy proposal that would address both climate and health by creating a dedicated revenue stream to make investments in a transportation system that relies less on gas-powered cars and more on electric vehicles, public transit, and active transportation (biking and walking). If you’re unfamiliar with TCI, you can read more about how TCI would work here.

What public health impact can we expect the TCI program to have in the twelve TCI states (plus Washington, D.C.)? Ultimately, TCI’s impact depends on two key decisions:

To help make these decisions, a study conducted by the T.H. Chan School of Public Health at Harvard investigated several investment portfolios under three different possible emissions caps. Any way you slice it, the expected public health benefits from TCI are on the order of billions of dollars.

The more ambitious proposal, which would reduce transportation-related emissions in 2032 by 25% compared to 2020 – is likely to deliver between $7.1 and $11.1 billion in health benefits. A less ambitious 20% cap would yield just $2.7 billion in benefits. These estimates make a great case for states to set the cap as high as possible.

This brings us to question 2: how should the TCI states spend their money? In the chart below, Scenarios A, B, and C refer to different investment strategies for TCI revenue under the most ambitious TCI program. Scenario A represents an emphasis on public transit and active mobility. Scenario C represents an emphasis on vehicle electrification and maximum greenhouse gas reduction. Scenario B is a blend between A and C.

Scenario A has the largest monetized health benefits because it does the most to get people walking and biking more, which does wonders for public health. Scenario C will generate the least revenue by 2032 because it will phase out gas-powered vehicles (and therefore the use of gasoline fuel) the fastest.

We at Green Energy Consumers are particularly excited about electrifying as many vehicles as possible with the TCI money, but all three scenarios provide billions of dollars in benefits that are a substantial improvement from “business-as-usual.” Every single county in the TCI region would see public health benefits under the program. TCI won’t eliminate the gap in air pollution exposure between white people and people of color, but it does narrow the gap. In fact, Black and Hispanic populations are likely to receive the largest share of the air quality improvement stimulated by TCI.

We need TCI in conjunction with other climate-forward policies

Although reducing tailpipe pollution by increasing the number of electric cars on the road is a good first step to closing the exposure gap, the issue of air pollution doesn’t end at the tailpipe. Oil refineries, which convert petroleum into fuel-grade gasoline, are overwhelmingly located in Black and Brown neighborhoods and contribute to some of the most toxic air in the nation.

There are no oil refineries in Massachusetts and Rhode Island, which makes it easy to turn our eyes away from the damage they cause to people who live near them. Phasing out gas-powered cars (and their tailpipes) is important, but it represents just a small portion of the health benefits that are available if we end our addiction to gasoline.

TCI is just one policy and it won’t address decades of air quality problems by itself. But it’s a long overdue step in the right direction. There’s substantial work to be done to green the electricity sector, invest in energy efficiency, decarbonize the heating sector, and end fossil fuel extraction and combustion, all of which would further decrease the gap in pollution and health outcomes between white people and people of color.

At Green Energy Consumers, we say let’s do all the above. Our health depends on it.