Electric cars are getting easier to charge 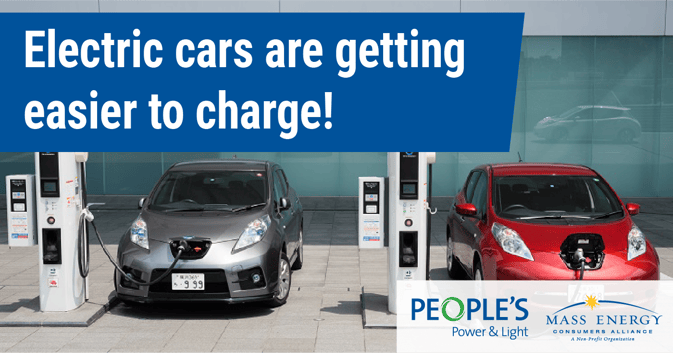 The question “but where will I charge?” is one of the biggest sources of apprehension among potential electric vehicle (EV) owners. We at Mass Energy and People’s Power & Light think it doesn’t need to be. After reading this blog post, we really hope that you’ll come to agree that:

For most of us, charging begins at home

Every home is wired for 120 volt electrical service. That’s what powers your refrigerator and LED light bulbs. For “Electric Vehicle Supply Equipment” (EVSE), commonly known as EV charging stations, 120-volt service is called Level I, or “trickle charge”. As we have written before, if you have a plug-in hybrid with an electric range of less than 30 or 40 miles, Level I should be fine for you. Plug in at night and by morning you should be back to full strength. Actually, if you regularly drive just 30 or 40 miles every day, Level I can suffice even if you have an all-electric car with a much bigger battery, such as the Chevy Bolt or Nissan LEAF (see photo below of a 2017 Nissan LEAF trickle-charging). Each night and on weekends, you’ll be able to plug in and replenish what you used. 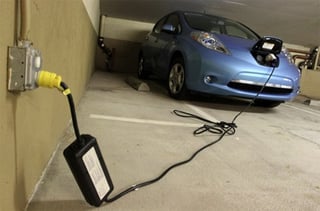 There will be many nights when you can go without recharging. In other words, depending upon your driving habits, you might be able to skip the purchase and installation costs of a Level II unit, which charges more quickly (with 240-volt electrical service).

If you have an electric vehicle with a bigger battery, drive significantly more than 30 or 40 miles per day, or need to be able to charge your vehicle more quickly for some other reason, a Level II unit might a good idea for you. Ultimately, the decision between using the Level I service in your home or installing a Level II unit depends on the kind of EV you get and your driving habits (the combination is important).

Here’s a chart that might be a helpful of charging options (more on DC Fast Charging later).

Ok, I’m ready to install a Level II charging station. Where do I start?

Step 1: Purchase a unit. There are tons of charging units available for purchase online and in many home-improvement stores. This article from "The Wirecutter" rates several popular charging stations. It’s a good place to start for information, but it pays to do some more research and shopping on-line. There are always new products coming along and, in general, prices are falling.

Step 2: Once you have the unit, install it. We highly recommend that you pay a licensed and insured electrician to perform this installation for you. EVSE, above all, are safety devices designed to regulate the flow of electricity from your home to your vehicle, so you want to make sure they are installed properly and can do their job of protecting your home and your vehicle. In some homes, installing a Level II charging unit will require adding a 240-volt line.

We have built up a network of licensed and insured electricians with experience installing EV charging units. If you’d like to be put in contact with one in your area, email drivegreen@massenergy.org (MA) or drivegreen@ripower.org (RI) with your zip code and we’ll put you in touch!

But I rent or travel a lot! What about public charging stations?

Most people would be surprised to learn that there are a lot of charging stations in Massachusetts and Rhode Island for public use. Some are free and some require payment. They are a mix of Level I, Level II, and what is called “DC Fast Charging” (Direct Current Fast Charging, or DCFC). DCFC operates at 480 volts and is capable of adding 60-90 miles of range in about 30 minutes. Some people call Level 3).

How do I find these public locations?

When you are away from home, you can access an increasing number of public charging stations. It’s easy to find these stations with cell phone apps and new EVs come with the functionality to project these apps right on the dashboard display. We recommend the PlugShare app. It will tell you whether the site is free or has a price by hour or kilowatt-hour. It will also show user ratings. You might also want to join a network such as ChargePoint or EVgo. They will also have apps that help you find their specific locations.

Some electric vehicle manufacturers have their own special charging programs. Here are the two we know of:

In January 2017, Massachusetts’ two largest utilities submitted proposals to the Department of Public Utilities to reduce the cost of installing charging stations in workplaces, multi-unit housing, and on government property. Funded by a small addition to the distribution charge on our electricity bill, the utilities would “Make Ready” installations by running wire from their poles to the customer’s site. From there, it would be the customer’s responsibility to pay for the installation of a charging station. The customer could own it themselves or lease the space to a company in the charging business, other than the utility.

Eversource was given approval to build 500 sites with 4,000 ports in 5-years at a cost of $45 million. National Grid is proposing to help build about 140 sites with 1,200 ports in 3 years at a cost of $25 million. The Department of Public Utilities has not yet acted on National Grid’s proposal, but because it is very similar to what Eversource submitted, we believe it’s just a matter of time. For both utilities, the vast majority of stations will be at Level II (240 volts). There will be a smaller number of DC fast charging stations that are capable of adding about 90 miles to a battery in 30 minutes. These will be placed at high-volume locations, mostly on highways. These programs should add confidence to EV drivers that they will be able to find stations away from home. Over the next three to five years, the number of charging sites in Massachusetts will more than double, but the number of ports will quadruple.

In Rhode Island, National Grid has filed a plan to spend $9 million on building more charging stations as part of a larger rate case with the Public Utilities Commission. This rate case is expected to take a few more months. We have partnered with the Sierra Club and National Resource Defense Council to intervene. We have been asking questions of National Grid with an eye towards shaping the program for maximum public benefit.

In addition, as a result of the Volkswagen diesel emissions scandal, Volkswagen has set up an organization called Electrify America, which will spend $1.2 billion in 17 metro areas outside of California (of which Boston is one!) in the next couple of years to build out public charging stations. In addition, Massachusetts is receiving $75 million and Rhode Island $4.1 million from the Volkswagen settlement to spend on environmental mitigation. Some of those funds will likely go towards building out public charging infrastructure, mostly at workplaces and multi-unit housing.

Charge ahead knowing that range anxiety is a thing of the past!

We understand that some folks would have a harder time than others to find a suitable charging situation – mainly tenants or residents of multi-unit buildings. But overall, the ability to plug in and fill up that battery is getting easier all time, especially because new all-electric cars now have a range of 100 or 200 miles and plug-in hybrids (electricity and gasoline) have a range of over 400 miles (we will be providing more details about range in an upcoming blog post). So if you have been considering buying or leasing an EV, the facts about charging are lining up in your favor.