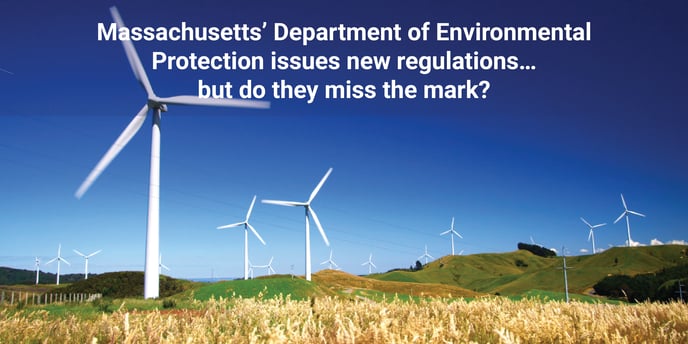 On August 11th, the Department of Environmental Protection (DEP) finalized several long-awaited regulations intended to help Massachusetts comply with the 2020 GHG emission reductions mandated by the Global Warming Solutions Act (GWSA). The regulations, which were supposed to take effect on January 1, 2013, are several years overdue. That they come now is the result of a May 2016 decision by the state’s Supreme Judicial Court (SJC) and Executive Order 569 signed by Governor Baker last September.

Mass Energy was co-plaintiff in the lawsuit that precipitated the SJC’s decision. There are six new regulations that will take effect in January 2018. Although this is a step in the right direction, we are disappointed that they are not more robust, especially in the transportation sector as we discussed in an earlier blog post. Two of the new rules target emissions from the electric sector.

The Cap on In-State Electricity Generators places an annually declining limit on emissions from 21 large fossil fuel-fired power plants in Massachusetts between 2018 and 2050. This is in addition to what is required under the Regional Green House Gas Initiative (RGGI). The purpose of this regulation is to accelerate emission reductions among the larger fossil fuel-generators in the state.

The Clean Energy Standard (CES) requires electricity providers – competitive suppliers and utilities – to supply an increasing amount of clean energy on top of what is required by the existing Renewable Portfolio Standard (RPS). Regulated electricity suppliers will be required to comply with this increase on an annual basis, beginning in 2018. The purpose of this regulation is to accelerate the “greening up” of our electricity supply, but it is not limited to RPS Class I resources, alone.

Regrettably, neither of these new regulations extends to municipal utilities, which account for approximately 13% of the state’s overall electricity load. Municipal utilities have their own emissions profile that needs to be addressed if Massachusetts is going to meet the mandates of the GWSA.

Imposing a CES is NOT the same as increasing the RPS. We need both!

The CES is an important policy tool that will help the Commonwealth progress in its efforts to reduce emissions and transform the energy sector. However, it is complementary to and not a replacement for the Renewable Portfolio Standard (RPS).

The RPS is the requirement that electricity providers supply a minimum percentage of electricity from renewable resources including wind, solar, and anaerobic digestion. The RPS is a core component of Massachusetts' clean energy and climate plan. It has driven demand for local, in-region renewables that can be economic engines in New England. The RPS contributes to energy diversity, spurs local and regional job growth, displaces fossil fuels, and helps to stabilize energy prices.

The CES, while important, neither replaces the RPS nor eliminates the need to increase the RPS. If anything, the CES necessitates an increase in the RPS.

You see, although utilities and competitive suppliers can comply with the new Clean Energy Standard by purchasing more Class I eligible resources above what is required by the RPS, they are not required to do so. In fact, compliance can also be achieved with hydroelectricity imports or nuclear generation so long as the power is made from projects that were in operation after December 31, 2010.

As demonstrated in the RPS analysis released in May, even with a CES in place, in the absence of an increase in the RPS there will be more clean energy supply than demand for it. Failure to increase the RPS, undermines existing projects and has the potential to jeopardizes Class I resources that may be in the queue as well as those, like the offshore wind procurements, that have not yet been contracted for. But increasing the RPS by 3% per year restores balance between supply and demand, while driving new renewable energy development before 2030.

Up next: September 19th Legislative Hearing on the RPS

Mass Energy has been and continues to be a leading advocate for an increase in the state's Renewable Portfolio Standard. We will continue to push for inclusion of municipal utilities in the both the RPS and the CES.

Several RPS bills have been filed this session and all have been assigned to the Joint Committee on Telecommunications, Utilities and Energy (TUE). A hearing has been scheduled for Tuesday, September 19th. At that time, the committee will invite public feedback regarding these bills and the RPS increase. Mass Energy will be there urging the legislature to support a 3% per year increase in the RPS (50% renewables by 2030).

Contact Clean Energy Programs Director Eugenia Gibbons to find out how you can help, including at the Joint Energy Committee hearing on September 19th where RPS legislation will be discussed.