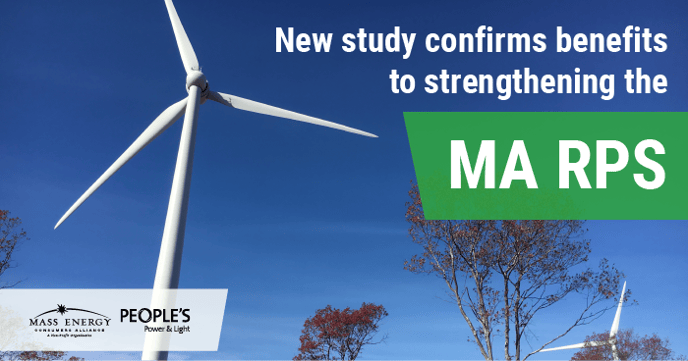 2016 was a big year for renewable energy in New England. Rhode Island took a big step forward by increasing its Renewable Energy Standard. It had been scheduled to increase by 1.5% per year through 2019 but now it will grow until 2035, making the Rhode Island standard one for the best in the country.

In Massachusetts, policy makers pushed to keep the Commonwealth atop the clean energy leader board by passing the Energy Diversity Act (i.e. calling for offshore wind and hydro) and revamping the solar incentive program (SMART). Although the Senate energy bill included a provision to increase the Renewable Portfolio Standard (RPS) by 2% per year, it was noticably absent from the final version enacted last summer.

This legislative session, however, more than a half dozen bills pertaining to the RPS have been filed. The study released this week details the benefits and impacts of 2% or 3% per year increase in the RPS. The findings are timely and will undoubtedly help frame the discussion among legislators going forward.

The Renewable Portfolio Standard (RPS) is a requirement that electricity suppliers source a minimum percentage of their supply from qualifying renewable resources. In Massachusetts, qualifying resources are classified as “Class 1” which simply means new, or in operation since 1998. These include things like wind, solar, and anaerobic digestion.

The Massachusetts’ RPS currently increases 1% per year, indefinitely. At its current rate, the RPS will require that Massachusetts be 15% renewable by 2020, 25% renewable by 2030, 45% by 2050. This consistent increase sends a signal to the renewable energy market that there is sustained demand for eligible resources. In this way, the RPS is an essential driver of clean energy.

RPS policies have been proven to support successful, cost-effective renewable energy development in each of the 29 states and Washington D.C. where they have been implemented. These projects have yielded tremendous environmental and economic benefits. In fact the Lawrence Berkeley National Laboratory (LBNL) and National Renewable Energy Laboratory (NREL) released a study in 2016 that revealed the combined benefits and impacts of all 29 RPS policies in 2013 included substantial GHG emission reductions, avoided emissions from criteria pollutants, and reduced water usage. In aggregate, these same RPS policies spurred job growth, savings to consumers, and displaced natural gas.

Closer to home, the GHG emission reductions associated with renewables brought online because of the MA RPS and the natural gas they displace are integral to the state’s ability to comply with the Global Warming Solutions Act (GWSA).

We’ve written many times about the state’s obligation to reduce GHG emissions 25% by 2020 and 80% by 2050 per the GWSA. As has been noted in previous blog posts, the RPS specifically affects the electric sector, which is important because  the most cost-effective way to reduce GHG emissions on the scale we need is to decarbonize the grid, particularly because GWSA compliance in the transportation and space heating sectors will largely be achieved through electrification.

Curiously, the Synapse/SEA study found that policies affecting renewable energy supply have gotten out ahead of demand for renewables. This has the unintended consequence of potentially cause the Renewable Energy Certificates (RECs) market to crash and to hinder the incremental development of new projects.  Figure 2, taken from the study, illustrates the levels at which the RPS increase addresses this concern and restores balance between supply and demand. 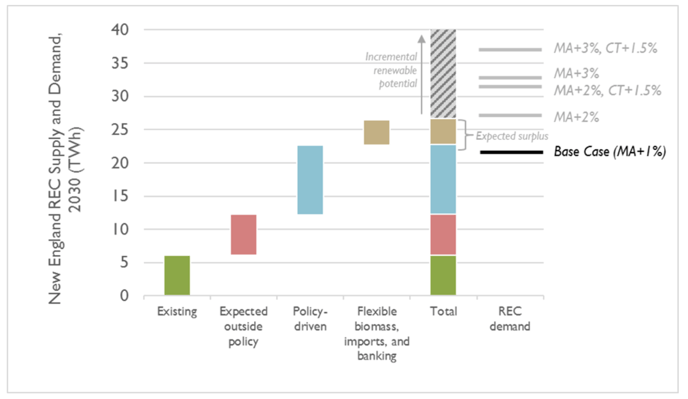 At 2% per year, balance between supply and demand is achieved and the REC market does not crash. At greater than 2% per year, incremental  new renewables are brought online as supply is developed to meet sustained demand and help us reach our carbon reduction goals

Renewables are good for consumers, the economy, and the environment

Perhaps the most compelling element to come out of this sudy is the affirmation that investments in renewable energy supply could result in reduced energy prices, increased jobs, and further displacement of fossil fuel generation.

Increasing the RPS is the answer.

So to recap, here’s why the Massachusetts legislature must act to strengthen the RPS:

As the study shows, doing so will not only accomplish these goals, but will also help to diversify electricity supply, create jobs, reduce consumer prices, and help bring down emissions.

This year more than 6 bills have been filed, each looking to adjust the RPS in one way or another. We anticipate that the study will help build consensus around a specific rate of increase between 2% and 3%. You can help! Email or call your legislator, especially your House Representative. Tell them about the study and urge them to support an increase in the RPS of at least 2-3%.

If you want to help with the advocacy effort, please email Eugenia@massenergy.org.  And check out our MA advocacy page for more information.