Why I voted against the Massachusetts Energy Efficiency Three Year Plan

In Massachusetts, three-year plans for energy efficiency are developed by the utilities with input and oversight from the Energy Efficiency Advisory Council (EEAC). Right now, the next plan’s final draft is filed with the MA Department of Public Utilities for approval, accompanied by a recommendation from the Council. As a member of the EEAC, representing the Mass. Nonprofit Network, I was the sole vote on October 26 against the plan for 2016-2018. This post will explain why.

Although the 2016-2018 plan is very strong for the Residential sector, the C&I sector’s plan is a big step back for Massachusetts.

Throughout this planning process, Mass Energy has updated readers about our ongoing push for higher savings goals in the plan, particularly in the Commercial & Industrial (C&I) sector. Since 2010, utilities have consistently underspent and underperformed in the C&I sector, despite the fact that energy efficiency  is the least expensive resource available. Although the 2016-2018 plan is very strong for the Residential sector, the C&I sector’s plan is a big step back for Massachusetts. If I could have voted for just the Residential sector, I would have, but this degree of C&I backsliding cannot be ignored. An airplane with just one excellent wing still deserves a lot of attention.

Lifetime Savings are the Key Metric

I have focused on lifetime savings because it makes sense to count ALL energy savings that a measure or program provides and because lifetime savings drive calculations for greenhouse gas reductions and “benefit-cost ratios.”

Below is a graph showing the lifetime savings of energy efficiency efforts proposed in the 2016-2018 plan compared to what has been achieved since 2010. Depicted in purple is what consultants to the EEAC recommended for the same period. 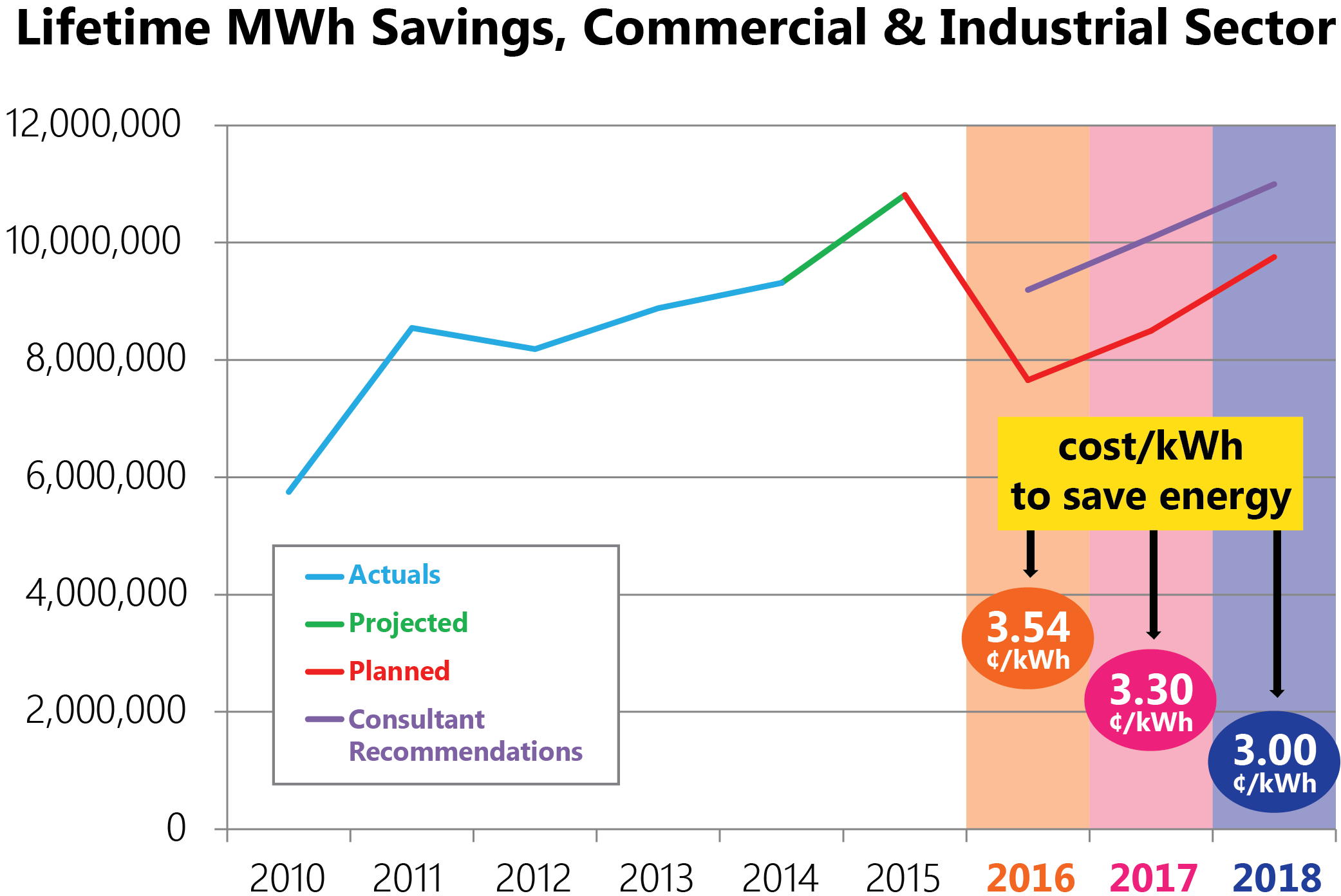 Savings in the C & I sector have been an upward trajectory since 2010. This has happened even though the utilities have been underspending by a large margin the budget approved by the EEAC and DPU for their C & I program. Savings have gone up, but below the goal set for that sector, while the cost per kilowatt hour to achieve the savings has stayed low. C&I efficiency is the lowest cost energy resource available to Massachusetts – period.

But now, the 2016 goal is 29% lower than what the utilities are projected to achieve in 2015. The utilities and several members of the Council will say that 2016-2018 total planned savings are higher than 2013-2015. Although this is true overall, the very steep ski slope will definitely cause the burning of more natural gas and oil than necessary.

Anatomy of a Ski Slope

In April, consultants to the EEAC submitted an assessment of potential energy savings, as required by the Green Communities Act of 2008[2]. On July 21, the EEAC voted unanimously on a resolution supporting the consultants’ recommendations. A key excerpt is here:

The EEAC voted in support of the assessment not just because of its excellent content, but because we had spent a great deal of time earlier in the year engaged in a facilitated process involving several workshops. These workshops with participation by EEAC members, EEAC consultants, and utilities produced a wealth of ideas and recommendations, many of which became part of that July 21 unanimous resolution. For the wonks among you, workshop materials, including briefing materials and meeting notes, are available online: January 27, 2015, February 12, 2015, March 3, 2015, and June 9, 2015.

In May, a coalition of nonprofit organizations led by Mass Energy submitted joint recommendations on how to better serve nonprofit customers, most of which are small- and medium-sized businesses in the C&I sector, an underserved market segment. The recommendations are found on the EEAC web site.

In my view, the more the EEAC collectively learned about details in both the residential and C& I sectors, the more confident we became that that there are more savings to be had at costs much lower than buying supply. In other words, we did not come out of the workshops and review of the consultants’ assessment thinking we have reached “peak efficiency.”

Over the summer we waited for the utilities to respond to the July 21 resolution. On September 23, we received their response along with a term sheet drafted by the Department of Energy Resources and the Attorney General’s Office. Disappointingly, the term sheet and plan included savings goals lower than what the EEAC had unanimously supported and voted for on July 21. Moreover, DOER and AGO negotiated an increase in the “performance incentive” for the utilities from $80 million to $100 million, a whopping 25% increase, despite the decrease in savings goals. (The performance incentive is payment to utility shareholders above and beyond the program costs for which they utilities are reimbursed.)

When the Residential and C&I sectors are combined, the difference in energy savings between the consultants’ recommendations and the term sheet does not appear significant. However, when I asked for the breakdown between Residential and C&I, I discovered the ski slope, an absolutely unnecessary retreat on savings in the C&I sector.

Because the C&I sector uses more electricity than the residential sector, the C&I sector makes up 62 percent of the plan’s goal for total lifetime savings. In that regard, it’s critical to meeting targets in the GWSA. When I saw the breakdown and the ski slope, on September 30, I proposed splitting the performance incentive (PI) between the sectors so that 62% of the payout would be dependent upon the utilities reaching the C & I goal (again 29% in less in 2016 than in 2015). I also proposed increasing the threshold for receiving the PI from 75% to 80%. (Currently, utilities only have to meet 75% of their goal to receive a performance incentive.) The purpose of the proposal was to ensure that the utilities focused on each sector, especially the C&I sector which accounts for a majority of the potential savings and costs far less to achieve.

A majority of EEAC members spoke in favor of my proposal on September 30. But something happened on the way to the forum. On October 26, when I made the motion to split the incentive, only one other councilor voted with me on the incentive amendment. And I was the sole voter against the plan. So not only does the new plan have much lower goals on C&I, the EEAC decided against taking any real steps to hold the utilities accountable for the lower goals.

Some councilors will say that the October 26 resolution has language calling on the utilities to report back frequently on their progress. We’ve been there and done that and still the utilities have underperformed in the C&I sector. Over the last couple of years, the EEAC agenda has frequently included discussions on why the utilities were not meeting the goals and were underspending. It was a topic at most meetings from mid-2013 through today. If we found that they were spending their budget and the cost per kWh was going up in a valiant effort to save more energy that would be one thing. The Council has consistently expressed concern about the underperformance, but to no avail.

I have been persuaded by the analyses presented to the Council by the EEAC consultants over the last couple of years suggesting that the C&I goals could have been met. The utilities made up for the C&I shortfall by producing more savings in the residential sector. I supported the increased goals and spending in the residential sector on the merits because of strong consumer demand in the sector, advancements in LED lighting, and other opportunities that have made surpassing the residential goals possible and wise. However, the EEAC has never indicated that increasing residential savings was justification for cutting back on C&I. As the EEAC consultants said on the record, the utilities have chosen, without justification, to reduce the C&I goals. 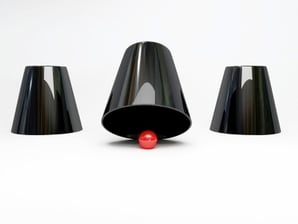 What’s ironic about the C&I ski slope is that the savings goal rebounds in 2018 to a level comparable to 2014. But the cost per kWh to save energy in 2018 would be 3 cents compared to 3.5 cents in 2016. In other words, while saving more, the cost would go down. There’s not a tradeoff here between saving energy savings and costs.

What’s more absurd is that on September 30, several councilors complained that the overall savings goals for each year of 2016-2018 were too flat. They wanted to see an upward trajectory. So on October 15, the utilities played with the numbers, kept the aggregate savings basically the same, and produced the upward trajectory by reducing the 2016 goals and increasing the 2018 goals. If they can reach the 2018 goal (which is still less than 2014 and 2015), it makes no sense why 2016 and 2017 have to be less. The plan, as approved by the EEAC, is in violation of the Green Communities Act because it fails to capture very cost-effective energy savings available from the C&I sector.

Here’s a graph from Synapse Energy Economics making its second appearance in our blog and showing the benefits and costs of various ways that Massachusetts could deploy to reduce greenhouse gas emissions between now and 2020. Some measures will cost us more. And some, like saving energy efficiency, have negative costs, meaning the economic benefits exceed the costs. In the C&I sector, benefits exceed costs by a factor of 3.8 to 1! 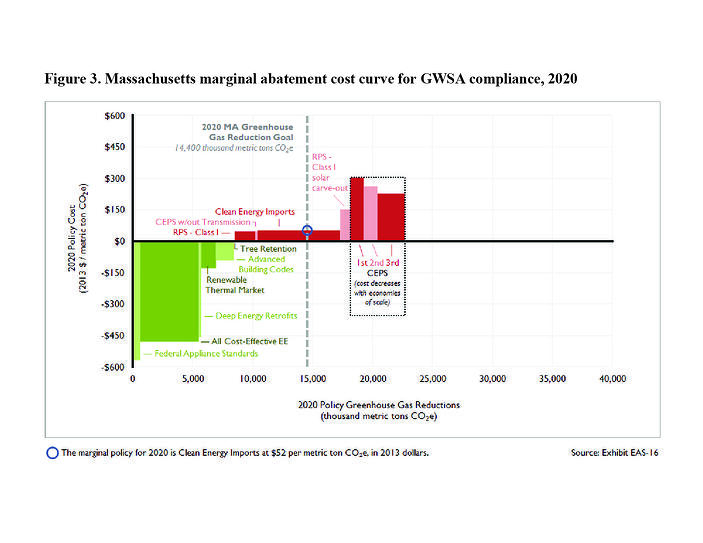 No other resource available to serve Massachusetts energy consumers costs less – not natural gas, oil, nuclear, hydro, wind, or solar. Because the EEAC accepted lower C&I savings goals, electricity suppliers are going to buy more power made from natural gas. And that is not compatible with the Global Warming Solutions Act. It’s that simple.

We know the utilities prefer transmission lines and gas pipelines – they make more money that way. There are actually efforts afoot to force electricity ratepayers to finance the proposed Kinder Morgan gas pipeline. But again, building out fossil fuel infrastructure, especially doing so with public subsidy, is not compatible with the Global Warming Solutions Act.

The governor and legislature are debating what kind of resources to buy from. Hopefully they will require the purchase of more wind, solar, and hydro. But it doesn’t make sense to buy more of those resources than we need, not when C&I efficiency is so much cheaper. As an advisory panel, the EEAC blew an opportunity to take a stand in favor of 3 cent electricity. Now the ball is in the court of the Department of Public Utilities.

In fair recognition of the best part of the Three Year Plan, highlights on the residential side include:

[1] The Green Communities Act (2008) requires investor-owned gas and electric utilities to capture all efficiency and demand reduction resources that are cost-effective or less expensive than new supply. The Global Warming Solutions Act (GWSA) (2008) requires that Massachusetts reduce its greenhouse gas emissions 25% by 2020 and 80% by 2050. Energy efficiency is a key strategy in the state’s plan to meet these mandates.