Why efficiency matters for electric cars 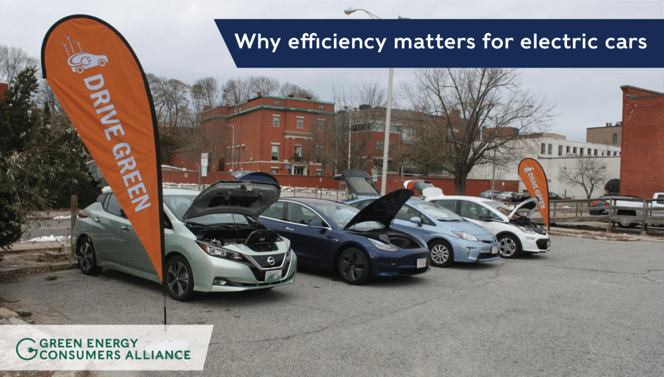 It is impossible for any machine to be 100% efficient because some energy is always lost to generating heat. Due to the physical limitations of cars, energy will be lost to wind resistance and rolling resistance from tires. But in general, the higher the efficiency, the less energy we need to power our car. In other words, efficiency means achieving the same performance without consuming as much energy.

This has big implications for moving towards a low-carbon future. For every unit of energy we don’t have to use because of improved efficiency, we are reducing our demand for energy and making it more feasible for renewables to dominate our electrical grid. It means we’re doing more with less, or creating what environmentalist Amory Lovins would call a “negawatt.”

Where does the energy lost from a car go?

Gas- and diesel-powered vehicles are not very efficient because they rely on internal combustion engines, which generate a lot of waste heat. There are also a lot more moving parts in thermal engines, like fuel pumps, that use some of the gasoline’s energy but don’t contribute to the car’s motion. As a result, gas-powered cars can convert only about 17% - 21% of the available energy in gasoline to kinetic energy. You can see a breakdown of where all that lost energy goes here. 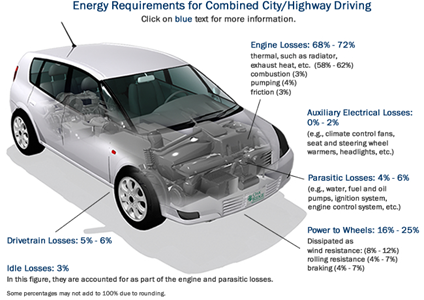 80% of the energy in gasoline is not used to propel conventional vehicles. Where does all the wasted heat from a combustion engine go? Image from https://www.fueleconomy.gov/feg/atv.shtml

Regenerative braking recovers the energy that is otherwise wasted when we use brakes and has been instrumental in improving vehicle efficiency - hybrid cars have this feature. Regenerative braking can improve the efficiency of a fossil-fuel-powered car up to between 21% and 40%. That means that even the most efficient gas-powered cars can only use about 40% of the available energy stored in gasoline.

By comparison, the efficiency of an electric car typically hovers around 60%, jumping up to about 77% if you include the effects of regenerative braking – which you should, since all electric cars use it (some better than others.) EV efficiency is then four times better than the average gas-powered vehicle and two times better than the most efficient hybrid. So by driving an electric car, you’re not only reducing demand for oil specifically, but you’re consuming less overall energy to travel the same number of miles.

MPG (miles per gallon) is an easy way to compare vehicle efficiency, but this metric only works for cars that rely on liquid fuel. That’s why electric cars have their efficiency standardized to MPGe (miles per gallon equivalent). MPGe is a measure of miles travelled per 33.7 kilowatt-hours, the amount of energy contained in a gallon of gasoline. It allows us to compare efficiency of gasoline and electric cars on an apples-to-apples basis. 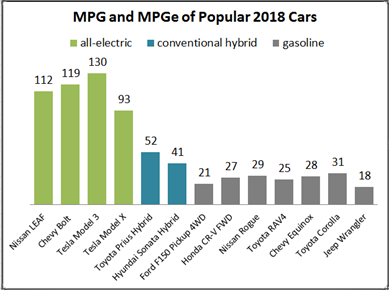 The efficiency of all-electric cars is measured in MPGe, while conventional hybrid and gasoline cars use MPG. Data from https://www.fueleconomy.gov/

The trend speaks for itself – electric cars aren’t just marginally more efficient than gasoline-powered cars, they blow them out of the water. Granted, many of the most popular gasoline-powered cars are all-wheel drive or much larger than the most popular electric and hybrid cars, which cuts into their performance. Size is an especially important factor for determining efficiency, but that doesn’t mean electric cars always have to be small.

Electrification of the SUV will give consumers the functionality they need without compromising on performance. 2019 promises at least two good, affordable all-electric options – the Kia Niro and the Hyundai Kona – to begin this shift to electric SUVs. So having a big family or sporty lifestyle doesn’t disqualify you from choosing an efficient option the way it used to. 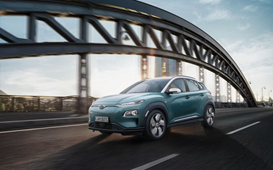 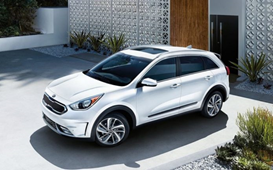 The Hyundai Kona (left) and Kia Niro (right) are likely to deliver efficiency without compromising on size.

I left plug-in hybrid cars, which have both electric and gasoline engines, out of the comparison for the sake of simplicity, since they have an efficiency rating for each engine. But there are already several good options for plug-in hybrid SUVs. The Kia Niro Plug-In Hybrid gets 105 MPGe on its all electric drive and 46 MPG on the gasoline drive – numbers comparable to the all-electric and conventional hybrid performance shown above. The actual efficiency of a plug-in hybrid would depend on how often a driver relies on their electric engine – the more, the better – but it’s still a huge improvement for cars of that size.

This difference in efficiency between electric cars and gasoline cars has two big implications. First, it costs less to run a car on electricity than petroleum, and continued improvements in EV efficiency will only make it cheaper for EV-owners to fuel their cars. Second, it adds to the environmental benefits of EVs. 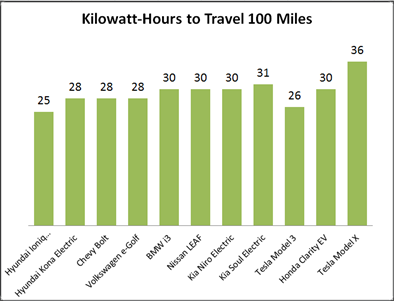 Electric cars are generally more efficient than conventional cars, but their efficiency can still vary from model to model. The fewer kilowatt-hours of energy it takes to travel 100 miles, the more efficient the car is. Data from https://www.fueleconomy.gov/

Eventually, when EVs are the norm, instead of asking how many miles per gallon a car gets, people will ask how many miles per kilowatt-hour. Until then, you can rest assured knowing that an electric car will make a big dent in your energy consumption and the money you spend at the pump.