There’s a bromance going on between Donald Trump and Vladimir Putin. It’s bizarre and has all kinds of serious implications for national security, foreign policy, human rights, and more. The focus of this blog is about how their shared agenda would have us relapse into a deeper addiction to petroleum.

Trump made it clear during the campaign that he wants to increase the extraction and burning of fossil fuels. His Secretary of Energy will be Rick Perry, who according to the New York Times, saw himself as being an ambassador for the oil and gas industry that he long championed in his home state of Texas. His Secretary of State will be Rex Tillerson, former CEO of Exxon Mobil. At Exxon Mobil, Tillerson made business deals throughout the world, often in places that are not always friendly to the United States. The U.S. has imposed sanctions on Russia since Russia forcibly took Crimea from the Ukraine. Nonetheless, Exxon Mobil has been working hard to secure a $500 billion deal with Russia to drill in the Arctic (made possible by global warming). 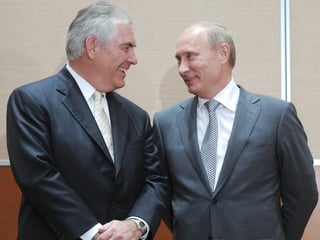 Putting issues like national security and human rights aside for a minute (sorry), it is important to understand that Tillerson and Vladimir Putin like doing business together. For them, getting lots of oil out of the ground and then selling it at high prices is good. As reported by the Center for American Progress, when oil prices were at $94 per barrel in 2012, Exxon reported $44.9 billion in profits. When oil prices fell to roughly $49 per barrel in 2015, those profits fell to $16.2 billion. Changing the price of crude oil by a dollar translates to a change in profits for Exxon of $350 million.

Like Exxon’s profits, the national budget of Russia is highly dependent upon the price of oil. In recent years, the budget has run huge deficits while crude oil prices have been below $50. Energy produces 37% of all Russian government revenue. So when you hear that Russia is talking to OPEC about manipulating the price of oil, think about how Putin depends upon oil to finance his domestic and military spending.

For reference, this figure is taken from a recent federal Energy Information Administration’s Short-Term Energy Outlook, showing crude oil prices in 2016 and what they project for 2017 and 2018. We know which of the green dotted lines the oilers would have if they could. 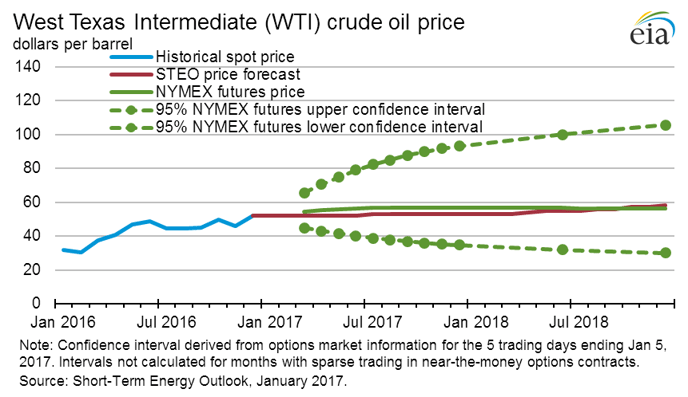 Let’s be clear - they want us to use a lot of petroleum, they want the price to rise, and they know that if we use a lot the price will rise. Most definitely, Exxon and Russia won the lottery on November 8.

We need to be aware of how the Trump/Tillerson/Putin alliance might distort US foreign policy. Just last week, Trump gave a speech at CIA headquarters saying, we should have taken the oil in Iraq and “maybe we will get another chance”. Is he implying that more people might die for the sake of US oil interests?

Recent polls show that 75% of people who voted for Trump want action to accelerate the development of clean energy.

The election has passed, but November 8th was not a referendum on energy policy. Recent polls show that 75% of people who voted for Trump want action to accelerate the development of clean energy. And two-thirds support fuel economy standards for automobiles. Obviously they voted for Trump for other reasons. If you voted for Trump or have friends who voted for Trump, engage with the new administration and tell them you won’t accept a “drill, baby drill” energy policy, especially one designed to bail out Putin.

Undoubtedly, if Trump is able to execute even a small part of his agenda, bad things will happen. But not forever because the world has changed greatly in recent years. We may never see crude oil prices near $100 per barrel again because we have so many alternatives and it takes less oil to produce a dollar of income in this country than it ever did. The more gasoline and heating oil prices rise, the more we shift to those alternatives, such as electric vehicles and heat pumps. Bloomberg New Energy Finance suggests that it’s just a matter of time before electric cars cause a crisis for oil companies.

There’s a good possibility that the policies of Trump and his bros will enable more oil consumption and higher oil prices over the next four years than if he had stayed on "The Apprentice." But the long-term result of their overreach could be to cause market changes that are bad for them in the long run, stranding their assets, like drilling equipment in the Arctic.

While we gnash our teeth about the White House, let’s remember sustainability starts closer to home – with state and local policy, and how we consume energy ourselves. Russia and Exxon might all be addicted to oil. But we do not have to be.