The biggest barrier to EV charging you’ve never heard of 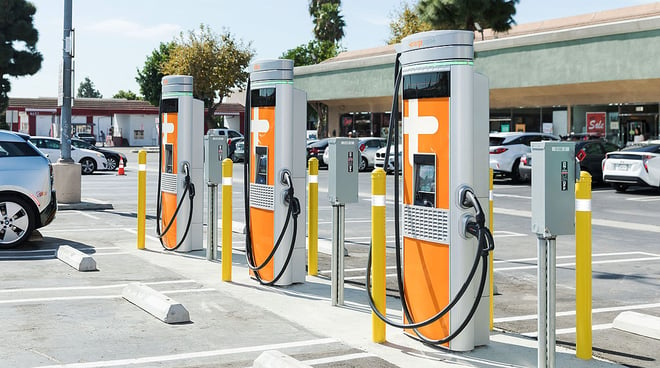 This fall, the Massachusetts Department of Public Utilities (DPU) is considering proposals from National Grid, Eversource, and Unitil that could make it more economical to operate DC fast charging stations. The proposals could be a big step forward in expanding much-needed charging infrastructure in the Bay State.

But is the DPU considering how to maximize all potential co-benefits of the proposal? In this blog, we’ll explain the new ideas under consideration by regulators and what’s still missing to achieve a smart energy policy that will drive Massachusetts towards the emissions reduction needed to meet its climate goals.

What are demand charges, and why do they matter for electric vehicle charging?

When you pay the electric bill for your home, you’ll notice that most charges are billed per kilowatt-hour. The more energy you use, the more you pay. However, bills for commercial customers, like businesses, offices, factories, and industrial parks, are not set up the same way. On top of paying a cost linked to energy use, commercial customers also pay a demand charge – a special fee linked to the maximum power drawn during a billing period.

In other words, a business or office using 1,000 kilowatt-hours of electricity all in a 15-minute period is going to pay more on their electric bill than another business that uses 1,000 kilowatt-hours evenly over a whole month. Demand charges reflect the fact that it’s expensive to build the transmission and distribution system out to extremes, and they try to encourage big customers to minimize their peak power consumption. 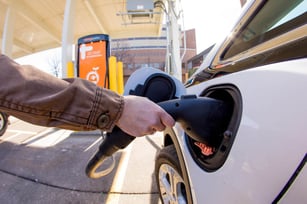 However, the demand charge system poses a big problem to anyone who wants to install and operate a DC fast charging station for EVs. Fast chargers, by definition, consume a lot of energy quickly and can draw up to 150 kilowatts of power for a single charge. (For comparison, a Level 2 charging station that you would install at home would only draw about 7.4 kilowatts.)

The cost of installing and operating a bank of 10 DCFCs is often uneconomical, especially now that there are relatively few EV drivers paying to use the stations to recoup the high costs incurred. Demand charges are part of the reason that there are so few fast-charging stations for EVs, creating a barrier to EV infrastructure buildout and subsequently, slowing down EV adoption.

What is the DPU doing about it?

If Massachusetts is going to get 900,000 EVs on the road by 2030 to meet its mandate to reduce climate-warming emissions, it needs to find a way to make DC fast charging financially viable so that more stations are built. In 2021, the Legislature ordered the DPU to identify an alternative to demand charges to support charging infrastructure. The challenge is, how can rates be designed for DC fast chargers so that the barriers to buildout are addressed while ensuring that operators of these stations pay their fair share of the costs they incur?

In response to an order from the DPU, the utility companies (Eversource, National Grid, and Unitil) proposed a new rate structure that would assign demand charges for EV charging stations on a sliding scale based on utilization. At low utilization, while EV adoption is still low, demand charges would not be a component of the bill at all.

As more EV drivers use a particular station, demand charges would be increased. The expectation is that higher utilization means more revenue collected from EV drivers who are paying to recharge their EVs, which will cover the added cost of the demand charge. The benefit of the proposal is that it would make operating costs for DCFC consistent over time as utilization grows with more EV drivers on the road.

What did Green Energy Consumers say about it?

Green Energy Consumers Alliance is acting as an intervenor to help the DPU assess the pros and cons of adopting the utilities’ proposal. As a non-profit with the goal of putting Massachusetts in a position to decarbonize its entire economy, we wondered how the demand charge alternative would interact with another idea to reduce peak demand: the co-location of solar, storage, and DC fast charging. 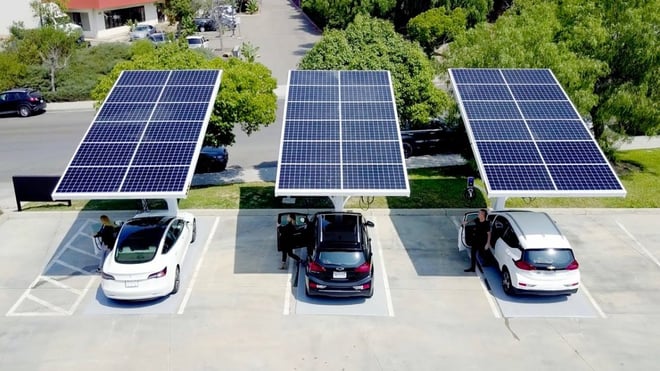 Green Energy Consumers was interested in raising the topic of co-location to assess the demand charge proposal for two reasons:

The concept of co-location is starting to become a reality. For example, a microgrid project launched in 2022 at an Alltown Fresh convenience store in Ayer, Massachusetts includes a solar canopy, energy storage, and a 50-kilowatt DC fast charger, the first project of its kind in the state.

With the help of our friends at Applied Economics Clinic (AEC), Green Energy Consumers Alliance submitted testimony to the DPU that analyzed the demand charge proposal in the context of co-locating solar, storage, and EV charging. AEC modeled the demand charges incurred at a sample site with just DCFC, DCFC and solar, and DCFC with solar and storage to explore how the demand charge alternative would affect the economics of the sites under several utilization scenarios.

AEC found that co-locating solar and storage at DCFC stations can be an effective strategy to reduce demand charges, but that the cost-effectiveness of doing so largely depends on the rate structure. In other words, more benefits could be unlocked (and more solar and battery storage deployed) if the demand charge proposal was modified to better accommodate co-location.

The two figures below were created by AEC to illustrate how the co-location of solar, storage, and DCFC could impact peak demand. As you can see, an optimal co-located system could feasibly cut peak power demand from 300 kW to 100 kW under the same pattern of driver recharging behavior. 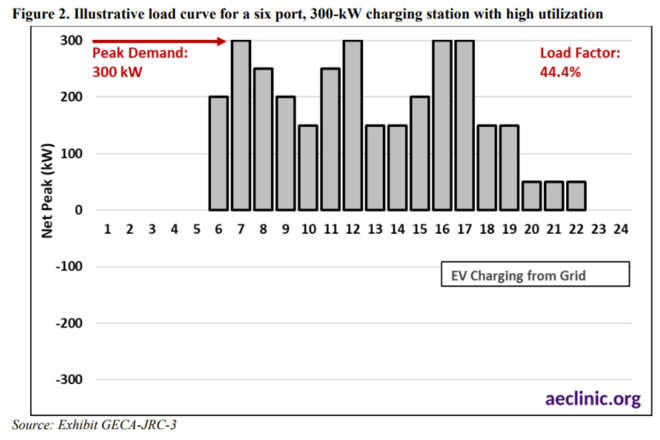 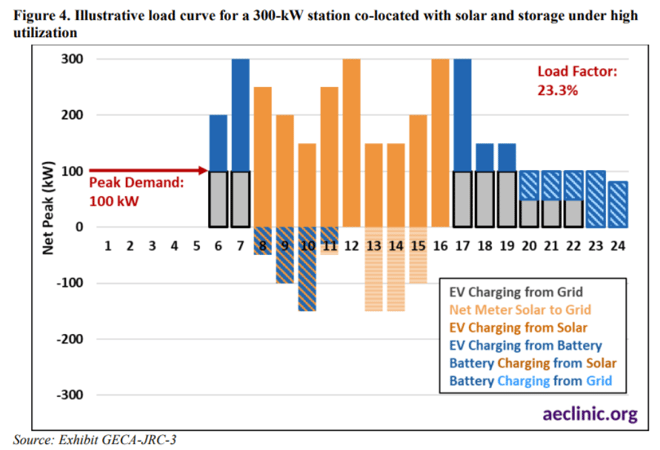 You can read their full testimony here.

We’re still waiting for the DPU to make their final decision on the approval of the demand charge alternative.  However, it’s unlikely that the proposal is modified in any meaningful way based on our testimony and feedback, simply because the DPU was directed to approve a demand-charge alternative, not incentivize co-location.

This is where a few problems with energy policy exist. First, improvements in clean energy technology are outpacing policymaking. Second, the technical issues are complex enough that it’s tempting for regulators to deal with them one at a time; but this strategy leads to missed opportunities to consider how all the different moving pieces will fit together. In this case, we believe Massachusetts is missing out by incentivizing solar, storage, and DCFC separately rather than together.

We are hoping that Green Energy Consumers’ participation in this docket has flagged an important issue for the regulators at the DPU and other policymakers to consider. Assuming the demand charge alternative is approved, it should be easier to operate DCFC in a financially sustainable way. The next question should be, is there a way to squeeze more benefits from the deployment of solar, storage, and DCFC together?