Taking Another Step On the Global Warming Solutions Act

In 2008, Governor Patrick signed the Green Communities Act (GCA) and the Global Warming Solutions Act (GWSA). These laws propelled Massachusetts into the forefront on clean energy. The GWSA and its corresponding Clean Energy and Climate Plan mandate that the Commonwealth reduce greenhouse gas (GHG) emissions 80 percent by 2050, with an interim goal of 25 percent by 2020. These are ambitious targets, to be sure. In fact they are among the best in the nation, which is why the GWSA also says that the Department of Environmental Protection (DEP) is required to write regulations that would, “establish a desired level of declining annual aggregate emission limits for sources or categories of sources that emit greenhouse gases.”

The regulations were supposed to have been adopted by January 2012 to take effect in January 2013, but DEP has not written those regulations yet. So Mass Energy has joined with the Conservation Law Foundation and others in filing a legal complaint in Superior Court, asking the court to enforce the law and require DEP to write the necessary regulations.

How and why did Mass Energy decide to sue the Commonwealth?

For the last few years, Mass Energy has been working with environmental groups to monitor the state’s progress on meeting GWSA targets, especially the interim goal of 25 percent carbon reductions by 2020.  After careful and thorough analysis detailed in the GWSA Implementation Scorecard, we concluded that progress could not be assured in total or most cost-effectively unless DEP wrote regulations. There is no doubt that the administration has successfully executed a number of important initiatives to promote clean energy, but not to the extent that can only be accomplished by appropriate regulations.

We have also been active in discussions about whether the Commonwealth should permit major new fossil fuel projects like the proposed Kinder Morgan natural gas pipeline. There is a study going on about whether we really need the pipeline. From Mass Energy’s perspective, it is not appropriate to approve that pipeline, as one example, without knowing how it would fit into an overall system that would drive down annual aggregate emission limits. We are not convinced that the pipeline is the best solution in the short term, and over the long term, it will make it harder and more expensive to reach our GWSA goals by employing compensatory methods of reducing carbon.

Why are regulations needed?

At Mass Energy, we are committed to reducing carbon emissions in the most economically sensible ways possible. GWSA regulations are needed to ensure that least cost methods are employed to the fullest extent possible. And frankly without regulations to guide decision makers and the utilities that administer efficiency programs, Massachusetts is missing an opportunity to do more through efficiency – leaving money, and significant energy savings on the table.

Take a look at the graph below. This marginal abatement cost curve was produced by Dr. Elizabeth Stanton of Synapse Energy Economics, consultant to the administration as part of her testimony about the costs necessary to reduce carbon emissions 25% by 2020. It illustrates the cost of various measures included in the MA Clean Energy and Climate Plan for 2020 (vertical y-axis), as well as the carbon emissions reductions expected from each measure (horizontal x-axis). 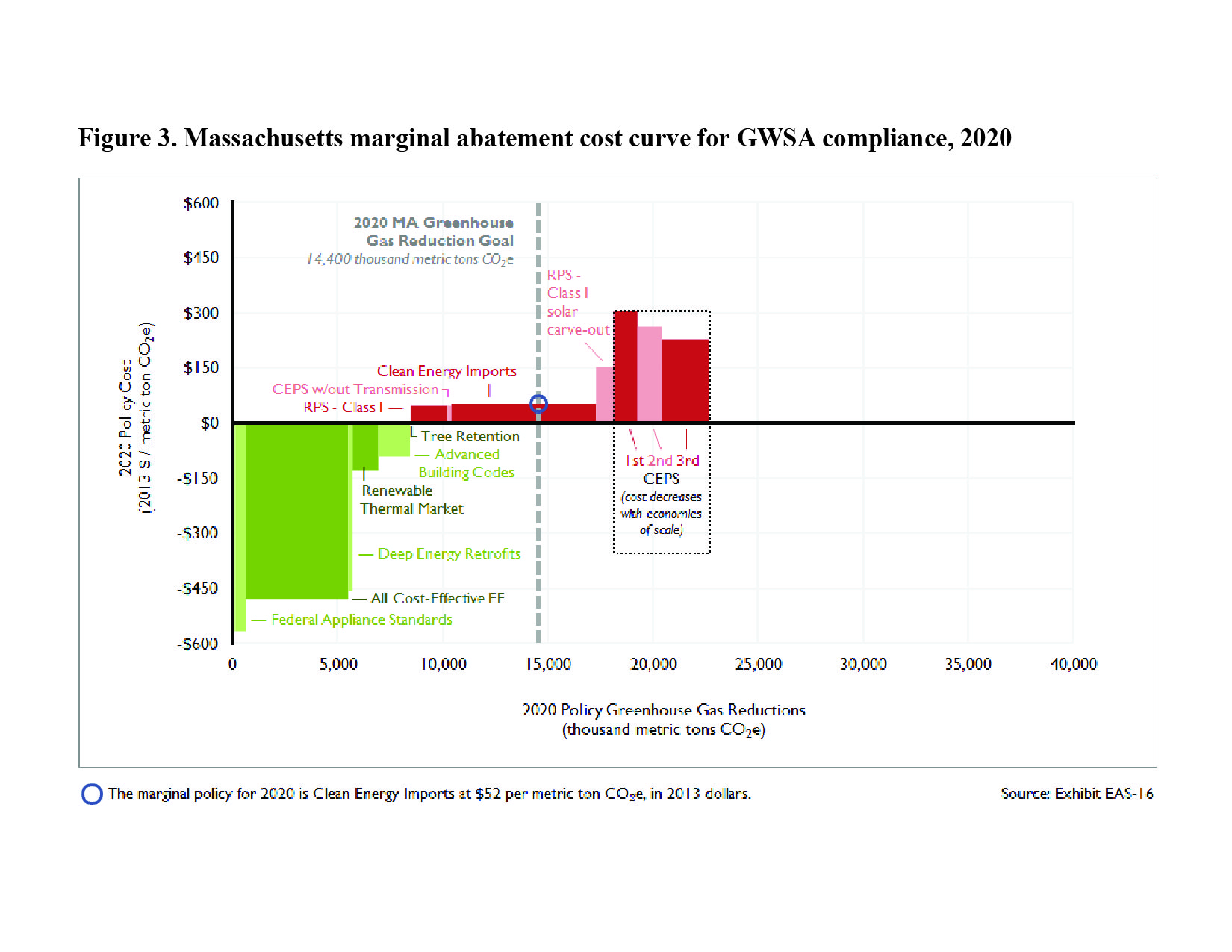 The graph illustrates that items on the left side of the dotted “2020 MA GHG Reduction Goal” line actually provide net benefits rather than costs, especially those depicted in green.  As we move along the X-axis to reach the amount of required carbon reduction, costs go up with each item.

What does this graph have to with the lawsuit?

The amount of energy savings we are getting from the Mass Save program is large, but it is less than the big green block shown above with the label “All Cost-Effective EE.” In fact, we think that Mass Save could probably triple energy savings before it became more costly than the items in red at the far right.  Why isn’t Mass Save producing more energy savings and carbon reductions, at least the amount shown in the big green block? There is no GWSA regulation requiring them to go further. The same can be said for other green blocks – like “Renewable Thermal Market” and “Advanced Building Codes.” Folks, in the absence of regulations, we are leaving money on the table, not to mention carbon savings.

According to the utilities that administer the Mass Save program, it costs about 3 cents per kilowatt-hour to save electricity in the Commercial & Industrial sector. Yet, the utilities are behind their targets in this sector for 2013 and 2014. That’s a problem because the C & I sector comprises about two-thirds of the electricity used in the Commonwealth. We see this as an opportunity: Spend 3 cents on something that reduces carbon emissions and energy consumption at a time when electricity rates have gone up over 20 cents because of rising prices for natural gas, a carbon emitting fossil fuel.

Before deciding to join the Conservation Law Foundation in this lawsuit, Mass Energy carefully weighed the pros and cons over several weeks. We ultimately decided that without the GWSA regulations, it is not likely that Massachusetts will reach its 2020 goal under the GWSA and doing so in the most cost-effective ways possible will not happen without regulations.  As a nonprofit organization that is pro-consumer and pro-environment and that takes the long view, we came down in favor of following through on what the law requires. We hope that the current administration or the next administration will agree.