Thanks to New England’s relatively strong solar policies, many of our members have gone solar – by owning panels, leasing panels, or participating in community solar programs. To those of you who have gone solar – congrats! However, even though you’re generating solar power, you’re probably not consuming the solar power you generate. In other words, even if you have solar panels or are participating in community solar, you cannot necessarily make the claim that you’ve reduced your personal greenhouse gas emissions as a result.

How can I be a solar generator without being a solar user?

To explain this concept, let’s take a brief step back to talk about Renewable Energy Certificates (RECs). The electric power grid is like a big lake with streams feeding into it (power generators) and streams feeding out of it (power users). As soon as an electron is produced by a generator, it is put into the shuffle of the power grid and its origin is instantly unknown. This applies to the solar panels on your roof because your home is connected to the power grid. That’s where RECs come in.

When a solar panel produces energy, it’s actually producing two products: (1) the electrons that go onto the power grid and (2) Solar Renewable Energy Certificates (SRECs, pronounced “ess-recks”). One SREC is produced for every megawatt-hour (MWh) of electricity produced by a solar panel.

SRECs exist as a tracking mechanism for solar energy. In both Massachusetts and Rhode Island, electricity suppliers (like National Grid and Eversource) are required by law to source a certain amount of the electricity they provide from local, recently built solar installations. That means that these suppliers have to purchase a certain number of SRECs as proof that enough solar energy went onto the grid to fulfill their mandate. Additionally, RECs and SRECs can only be purchased once. So, by owning the SREC, the supplier has claimed that solar energy to meet their mandate, and other suppliers must find another SREC to buy in order to meet their mandate. This is how renewable mandates effectively shift our power grid away from fossil fuels!

Another important reason that SRECs exist is because electricity produced from solar panels has value beyond the power provided by the physical electrons. The fact that solar panels do not emit carbon dioxide or noxious pollutants is an attribute that has value, and that value is monetized as SRECs. In other words, SRECs represent the environmental attributes of the electricity produced by solar generators.

Therefore, the only way to claim that the energy you’re using is “green” is to own or purchase enough RECs, or SRECs, to match the amount of electricity that you use from the grid. Put another way, you cannot make a claim that your electricity use results in zero emissions unless you own or have purchased RECs for the electricity you consume.

What does all of this mean for someone who’s gone solar?

Unless you have made a special effort to retain the SRECs produced by the solar panels you own, lease, or benefit from in a community solar arrangement, those SRECs are being sold to an electricity supplier. Because Massachusetts and Rhode Island require utilities to purchase SRECs, SRECs are worth a lot of money, and selling them is what makes solar financially feasible for the majority of consumers. Usually, SRECs from residential systems are sold through brokers, who bundle them for electricity suppliers, who in turn use them to fulfill their mandates.

By buying the SRECs that your solar project produced, electricity suppliers are purchasing the right to claim the environmental attributes of the solar you generated.

For example, if a solar system on Jane Green’s home produces 1 MWh of electricity and a utility purchases the corresponding SREC, the utility will use that SREC to meet their state mandate and claim, “We are supplying 1 MWh of zero-emissions, renewable electricity to the electric grid, and therefore the grid’s emissions as a whole have been reduced.” If Jane Green says, “I powered my home with 1 MWh of zero-emissions, renewable energy thanks to the solar panel on my roof and thereby reduced my carbon footprint”, then that 1 MWh of energy – and its attribute of zero-emissions - has been double-counted.

If we ignore this issue of double counting, we are tricking ourselves into thinking that we are making progress twice as fast as we really are.

Even though only 1 MWh of renewable energy has been produced and consumed, Jane Green and the utility together have claimed 2 MWh-worth of emissions reductions. In this case, as the owner of the SREC, only the utility actually can claim to be using renewable energy and reducing its overall emissions.  Think about it – if we ignore this issue of double counting, we are tricking ourselves into thinking that we are making progress twice as fast as we really are.

Had Jane Green retained her SREC, she would have the right to claim the environmental attributes of the electricity her solar panels produced. Her decision would have had a second impact by creating “additionality”; if Jane keeps her SRECs, the electricity suppliers cannot use her SRECs to fulfill their mandate. They have to go out and find other SRECs to buy. Therefore, as a whole, emissions related to electricity generation in New England will be reduced by more than if Jane had sold her SREC.

A simple math problem might help explain this concept:

If utilities were required to source 100 MWh of electricity from solar panels, they would have to purchase 100 SRECs.

If Jane sells her SREC to a utility, they need to buy 99 more. A total of 100 MWh of solar electricity will be generated, pushing off the need for fossil fuels.

If Jane keeps her SREC, the utility needs to buy 100 SRECs. A total of 101 MWh of solar electricity will be generated, pushing off the need for fossil fuels even more.

Unfortunately, many solar companies do not make this distinction between generating and using solar electricity clear in their advertising. It’s deceptive marketing to claim that a consumer can reduce their personal carbon footprint by simply installing solar panels on their roof or participating in community solar; the bottom line here is you cannot claim to have reduced your electricity-related emissions unless you retain the SRECs those panels produce. 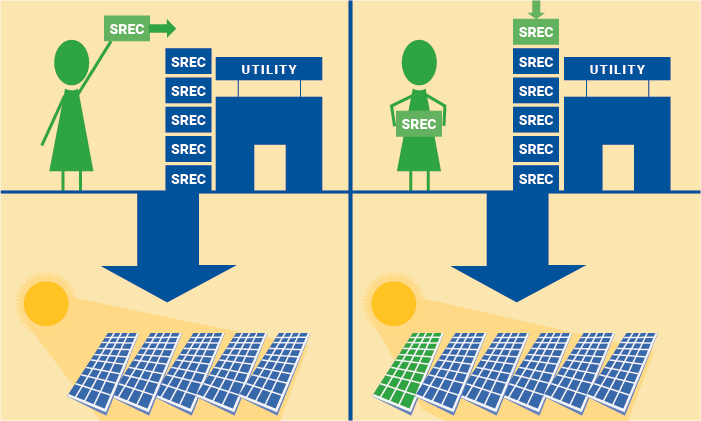 How Sell Your SRECs AND Be a Renewable Energy Consumer

With that said, we understand that retaining the SRECs is not financially feasible for the majority of consumers. As a solar generator, you have a couple of options:

In sum, whether you’re a solar generator, user, or both, you’re helping New England on its path towards more renewable energy. As our Executive Director says, you’re a hero either way!  But let’s make sure we’re not double-counting…