Summer Is Coming: Time to Shave the Peak

But with high summer temperatures comes high electricity demand. The bad news is that, between 5pm and 8pm on peak electricity demand days, the electrical grid operator turns on dirty, expensive power plants that sit unused the rest of the year. The good news is that you can help fight dirty energy on peak days by reducing your electricity usage during peak hours. Sign up for Shave the Peak alerts at greenenergyconsumers.org/shavethepeak so that you’ll know when to turn off your air conditioner, lights, and appliances.

On a normal day in the fall and spring, electricity demand is extremely low at night, when everyone’s asleep and industry has shut down. Demand rises rapidly from 6am to 9am as lights are switched on and businesses open their doors. Solar energy, which is producing power to run homes and businesses between 10am and 5pm, reduces electricity demand in the middle of the day, but demand spikes around 6pm to 9pm, when solar energy winds down and people make dinner or watch TV at home. Demand falls again at night, and the cycle starts over. 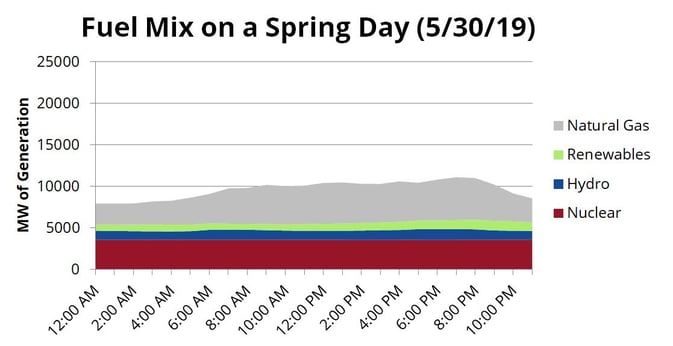 Summer heat throws a big wrench in this pattern.

On the hottest days of summer, everyone cranks their air conditioning and fans. Demand peaks in the early evening, putting a huge strain on the grid. Electricity demand on a peak day can be twice that of demand on a spring day. To meet the high electricity demand, the electrical grid operator signals old, dirty, expensive power plants to start supplying energy to the grid. These power plants—including coal and oil plants—sit unused for most of the year, but they’re kept around just for these peak days. 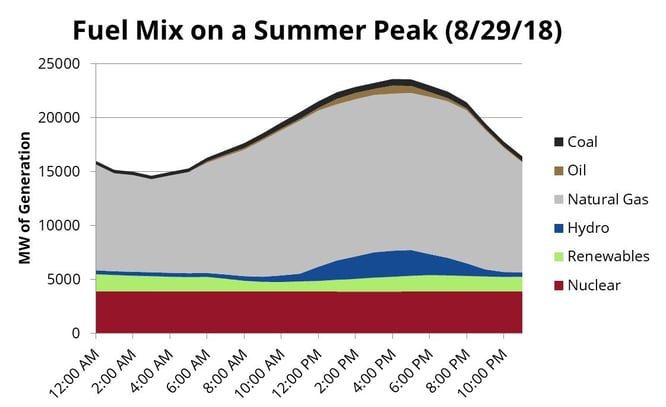 That’s why electricity during the 10% of hours that have the highest demand lead to 40% of electrical grid costs. It’s also why electricity is dirtiest during peak hours.

But we can help fight these dirty power plants and green the grid by shaving the peak.

At Shave the Peak HQ (i.e., the Green Energy Consumers offices in Boston and Providence), we closely follow demand predictions from the electrical grid operator, ISO New England (you can check out their real-time data and predictions for yourself on the ISO-NE Website)! When it looks like the next day will be one of the 4 – 8 dirtiest, most expensive electricity days in the year, we send text and email alerts to our Shave the Peak subscribers reminding them to reduce their electricity usage where they can.

Summer 2018 was especially hot, so we called quite a few peak days. Thank you to all of the Shave the Peak subscribers who helped us green the grid, and let’s do it again this summer.

In the second year of the Shave the Peak program (and the first under Green Energy Consumers Alliance), we grew our subscriber count by a factor of 10. The highest peak occurred at 5pm on August 29th, when electricity demand reached 25,612 megawatts. This was the highest demand seen in New England since 2013. Summer 2018 had 12 days that hit electricity demand over 23,000 megawatts; summer 2017 had just 4.

For the energy nerds like me, here are some key stats on last summer’s peak days: We successfully called the top ten demand days and eleven out of the thirteen days with the highest emissions. The hour with the most fossil fuels was the peak hour of the summer, 5pm on August 29th. All of the top ten demand peak days had electricity demand over 23,000 MW (our unofficial cutoff for last summer) and prices at least twice the average.

We didn’t get every single peak day right: for example, we called a peak on August 16th based on ISO New England predictions, but it didn’t end up cracking the top 15 highest demand days of the summer. We also missed two emissions-intensive days in September when high emissions were driven by unexpectedly low nuclear production, not just hot temperatures.

Solar energy makes a big difference! On the hottest days of summer, the solar panels on homes and businesses were pumping out electricity that isn’t counted in the numbers from ISO New England. This means that demand would have been over 2,000 MW higher without solar energy. Although we don't have the exact data for last summer's peaks, check out what an impact solar can make on a low-demand day, like April 21: 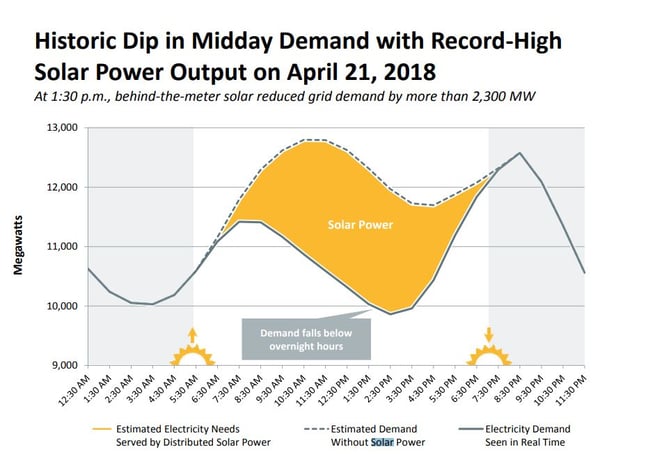 And we have significantly more solar this year than last thanks to programs in place throughout New England, but especially in Massachusetts and Rhode Island. ISO-NE's 2019 Summer Outlook predicts that solar will reduce the peak by 2,900 MW, or more than 10% of total demand. Due to solar, efficiency, and demand reduction programs like Shave the Peak, we can be confident that we'll have enough electricity to meet the peak. But reducing your energy during peak hours ensures that that electricity is cleaner and cheaper.

Does Shave the Peak make a difference?

Yes! Collective action leads to collective impact. Plus, it gives us all the chance to think about our impact on the grid in a day to day way. However, we’re not able to see the difference in the data we get from ISO New England: we simply can’t trace in shifts in demand to Shave the Peak subscribers rather than to other demand response programs or a slight change in temperature.

That said, we believe it’s important to keep acting. The more people across New England we have shaving the peak, the bigger of a difference we can make. So sign up on our website and tell your friends to do the same. And there are some exciting new ways for energy consumers, especially electric vehicle drivers in Massachusetts and Rhode Island, to automate their peak shaving and even earn rewards for helping green the grid. We’ll share more about those options in an upcoming blog.

Summer is coming. Are you ready to Shave the Peak?