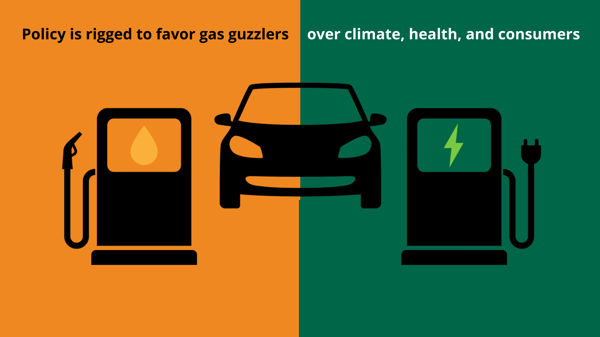 In April 2020, while the economy shuttered and infection rates for COVID-19 in the US skyrocketed, pickup truck sales exceeded sedan sales for the first time. Passenger cars are the largest contributor to greenhouse gas emissions, and more people than ever believe man-made climate change is happening. So how are biggest gas-guzzling cars taking over the industry?

Fuel economy standards don't do enough to keep big cars off the road.

Under the Obama-era Corporate Automotive Fuel Efficiency (CAFE) standards, the efficiency of new vehicles sold in the US was required to ramp up every year to reach an average of 55 MPG by 2025. Regulators measure fuel efficiency compliance as a weighted average of all the vehicles sold by each automaker. Big companies like General Motors, Toyota, and Ford have to sell enough small, fuel-efficient cars to balance their big SUVs and pick-up trucks, or else buy regulatory credits to cover the difference.

Tesla has been the primary benefactor of this system; last quarter, the company made $428 million by selling compliance credits to other automakers. That figure includes other regulations to put more low-emission cars on the road, like the ZEV mandate, but it’s clear that without regulatory credits, Tesla would be struggling to sell electric cars at volume.

With the ambitious targets set by the Obama administration, legacy automakers (those that started by selling gasoline-powered cars) could buy compliance credits to buy time as they figure out their own strategy for producing electric and fuel-efficient cars. That’s fine; as long as fuel economy standards tighten on a predictable and regular basis, the rising tide lifts all the boats.

The problem is that fuel economy standards are not set in stone. Earlier this year, the Trump Administration proposed freezing the CAFE standard at a measly 37 MPG, the 2020 level, indefinitely. According to Analysts at the Rhodium Group, this decision could cost Americans $236 billion in extra gasoline by 2035 and stifle innovation across the industry.

In a world with frozen CAFE standards, investing R&D dollars into efficiency and electric cars doesn’t make financial sense, especially when big cars with low efficiency are a cash cow. The sale of a single pick-up truck (average 22 MPG) rakes in as much as $17,000 in profit for carmakers. Without the pressure of strong fuel economy standards, they will sell as many big gas-guzzlers as possible. Even the automakers that advocated against Trump’s weakened efficiency standards aren’t willing to lose their competitive advantage in the US by producing higher-efficiency trucks and SUVs of their own volition.

Fuel economy standards raise the average efficiency of new cars sold in the US, but there’s another federal regulation on the books intended to keep low-efficiency cars off the roads completely. The Gas Guzzler Tax levies a $1,000-$7,500 fee on car buyers who purchase new vehicles that get less than 22.5 miles to the gallon. Combined with fuel economy standards, the gas guzzler tax should send a strong message to keep the most polluting and fuel-intensive cars off the road.

However, the tax doesn’t apply to SUVs or pick-up trucks. When the policy was introduced in 1973, big SUVs and pickup trucks were only purchased as work vehicles for specialized tasks; now they’re the new family car. So even though the United States has two federal policies to support fuel efficiency, they’re too weak to keep gas-guzzlers off the road. 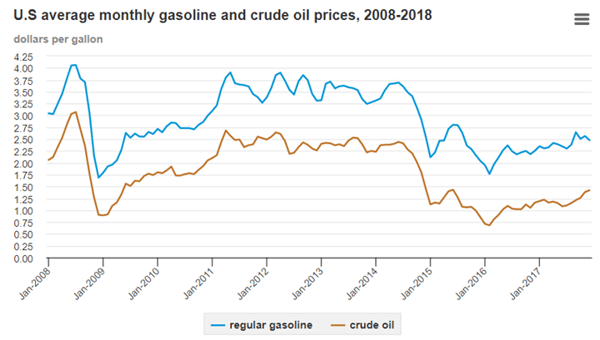 The average price of gasoline in the US has varied between $1.75 and $4.00 between 2008 and 2018. Price swings make budgeting for gasoline difficult. Source: US Energy Information Administration

Since the average car spends 11 years on the road, every single gas-guzzler sold today is locking in tons of carbon emissions through the next decade.

Yes, building electric and fuel-efficient SUVs and pickup trucks is more expensive than building gas guzzlers. Yes, some of that cost is passed onto consumers. However, lower fuel costs over the lifetime of a car far outweigh a slightly higher upfront cost, making fuel efficiency standards a net win for drivers. Anyway, consumers aren’t buying new SUVs and pick-up trucks because they’re affordable. The average new pickup truck sold in the US costs $50,000 – a luxury vehicle by any definition.

Don't let the green meadow fool you. This SUV gets 13 MPG, will emit 114 metric tons of CO2e over its lifetime, and cause $6,300 in economic harm to society by contributing to climate change. Does it belong on the road for the next 11 years?

Neither the price of gasoline nor the purchase price of a gas-guzzler itself reflects the cost of burning more gasoline to society. Climate change will exacerbate health issues, especially for the most vulnerable among us. Particulate emissions from tailpipes are directly correlated to worse air quality, which leads to worse health outcomes and greater vulnerability for respiratory illnesses like COVID-19. A recent study by the American Lung Association found that replacing gas guzzlers with electric vehicles would save New England $2.2 billion in healthcare costs by 2050 and $72 billion nationally.

Of course, automakers wouldn’t be doing so well selling inefficient pick-up trucks if consumers weren’t buying. But is there any wonder as to why consumers are opting to buy bigger, pricier vehicles when sedan availability is shrinking, big cars are marketed as safer and sportier, and commercials like this exist?

Not everyone needs a big car. Those who do should have to choose one with good fuel economy, both to lower their own fuel costs and to release fewer climate-warming and health-harming emissions.

Electric SUVs and pickups are coming. Automakers aren't making it easier to buy them though.

EVs are a necessity to meet climate goals for 2030 and beyond. Without strong federal policy for fuel efficiency, there’s a real risk that automakers will not have the financial or regulatory incentive to manufacture enough plug-in vehicles or change their business model to rely less on the sale of money-raking, climate-warming SUVs and pickup trucks. No automaker wants to be left behind in the inevitable transition to electric vehicles, but no one wants to lead the charge either.

The Toyota RAV4 Prime is a plug-in hybrid with 42 miles of all-electric range and three times the fuel efficiency as its non-hybrid cousin. Strong fuel economy standards would ensure more cars like this are available on the market.

For example, inventory of the 2021 Toyota RAV4 Prime in the United States is limited to 5,000 units in the 13 ZEV states. Consumers in states with strong EV adoption policies (including aggressive electrification goals and state rebates) will receive most of the inventory. In those states, there are not enough cars to meet demand, so new-car buyers who might have easily bought a plug-in will be forced to opt for another car – perhaps the regular RAV4 – and lock in five times the amount of carbon pollution over the next decade.

What can we do?

The reality of the marketplace is that our policies are rigged to favor high-emitting cars. Incentivizing EV adoption isn’t about making transportation more expensive; it’s about leveling the playing field and making sure consumers have good fuel-efficient and electric options for the vehicles they want to buy. Weak fuel economy standards subsidize gas guzzler ownership for the very wealthiest while exacerbating the burden of climate change and air pollution for everyone else.

We need a carrot and stick approach to make it more expensive to fuel a gas-guzzler and cheaper to buy an electric vehicle. This would provide the most benefits to consumers and the clearest message to the automotive industry to prioritize the production of fuel efficient vehicles. This strategy has already worked wonders for Europe; in July, plug-in vehicle sales tripled compared to last year.

Although federal-level policy was the focus on this blog, the work isn’t limited there. The Transportation & Climate Initiative (TCI) is a regional effort to put a price on the pollution caused by transportation fuels. Green Energy Consumers will be advocating for TCI in Massachusetts and Rhode Island throughout the rest of this year and 2021. Follow our advocacy efforts and learn more about the benefits of TCI by subscribing to the blog.