Spend less on car maintenance with an EV

Most people still don’t know anyone who has switched to an electric vehicle or can’t name any electric models available for sale besides Tesla. There are a lot of factors contributing to the gradual rates of EV adoption, but it is in part due to the myth that gasoline cars are “easy” for consumers.

According to several studies and the personal experiences of EV drivers who have switched through Drive Green, electric vehicles have lower maintenance costs and better reliability than gas-powered cars. Though gasoline-powered cars are familiar, they are by no means the easier or better option for consumers. Here’s why.

AAA reports that EVs have lower maintenance and repair costs than gas-powered cars. According to their estimates, the average EV costs 6.6 cents per mile driven to maintain, compared to gas-powered sedans and SUVs, which cost 8.9 cents and 9.9 cents per mile, respectively.

To understand where these savings come from, we compared the maintenance schedules for the Chevrolet Bolt EV and the comparable gas-powered Chevrolet Sonic.

Both cars need to have their tires rotated, windshield wipers replaced, and passenger air filters replaced regularly. However, the gas-powered Sonic requires an additional oil and engine check every 7,500 miles, along with periodic review of spark plugs, cooling systems, drive belts, and other combustion engine parts that don’t exist in electric induction motors.

Individually, each oil change might only cost $30 and take an hour, but in the aggregate, the time and money it takes to maintain a combustion engine vehicle adds up. EV drivers can expect to save $1,500 in maintenance costs over 150,000 miles of driving – not counting the time lost waiting at the service stop.

Regular maintenance is proven to reduce the severity of a car’s end-of-life repairs. However, of the 31 most common car problems, two-thirds are issues that only combustion engine cars can have, including transmission problems, clogged filters or fuel injectors, and faulty spark plugs. Internal combustion engines have as many as 400 moving parts, compared to the induction motors in EVs, which only have about 20 moving parts.

In other words, there are 20 times more components that can go wrong in a gas-powered car than an EV. All these extra components are more likely to break as the vehicle ages. Considering that two-thirds of the 60 million cars sold in the United States every year are pre-owned, the long-term reliability of electric vehicles is particularly good news for the many consumers who never drive a brand new car off the lot and are often burdened with the repair costs that come with older gas guzzlers. 40% of Americans struggle with a surprise expense of $400, while the average unexpected car repair costs between $500 and $600.

EVs are still vulnerable to physical problems like uneven tire wear or jammed air filters in the HVAC system. But the simplicity of electric vehicle powertrains ensures that EV drivers will be able to spend less time and money dealing with mechanics. Even the brake pads in EVs are slower to wear than in a gas-powered car, due to regenerative braking systems that charge the vehicle’s battery during deceleration without relying on friction.

An EV driven for 150,000 miles will save its driver the grief of a flashing "Check Engine" light and $2,000 in unexpected repair costs.

Clunkers are generally scrapped when the cost of repair exceeds the value of the car itself. Since electric powertrains outlast combustion engines and are less likely to need costly repairs, electric cars are likely to stay on the road well beyond the 150,000-mile mark we expect of gas-powered cars today. Therefore, the combined maintenance and repair savings of switching to an EV (about $3,500 over 150,000 miles) are understated because the electric car will likely last far beyond 150,000 miles before it's ready to be scrapped.

Finally, while AAA's estimates for maintenance and repair costs give the edge to EVs, they may even be conservative. Fleet managers in New York City have reported spending less than $400 to maintain their all-electric vehicles per year, compared to over $1,300 for combustion-engine cars. 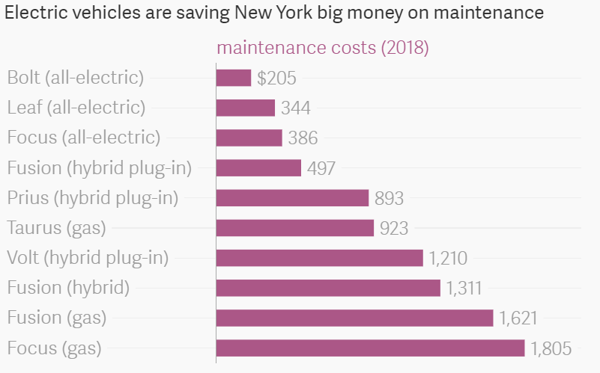 So far, none of these estimates have included the additional cost savings that come from switching to electricity as a fuel source. By our math, this saves drivers in New England an additional 4.7 cents for every mile driven.

What about the battery?

Since induction motors aren’t prone to breaking down, the new bottleneck that will limit EV lifespan is the battery. Unless there’s a technical problem with the battery (which is usually covered under warranty), lithium-ion batteries don’t suddenly sputter and  break down like combustion engines. Instead, battery decline is a gradual process of capacity loss.

Battery longevity varies from vehicle to vehicle, but just as driving range is improving with every new model year, so is battery lifespan. Although the data is hard to come by for many automakers because most haven’t been producing electric vehicles for more than three years, Tesla cars have a lifetime expectancy of 300,000 to 500,000 miles, more than twice what gas guzzlers are expected to last. You may even have heard that Tesla has ambitions to make their cars last as long as one million miles. General Motors does, too. Although Tesla is most outspoken about their battery technology, the data shows that other automakers are keeping up.

The 2017 model years of the Tesla Model S, Chevrolet Bolt, and Nissan LEAF all have extremely similar rates of battery decline over 3 years of driving –  about 4% of storage capacity has been lost in this time. This high-level performance and long-term reliability is why many EVs are sold with a 100,000 mile/8-year warranty on the battery.

If you’re buying a pre-owned EV or intend to drive an EV until the end of its useful life, you’re not going to get stuck on the side of the road because the engine suddenly gives out. Instead, EV drivers will be able to make an informed judgment about when battery capacity has declined beyond what is useful for them, at which point the battery will be reused for a stationary application or recycled.

Gas-Powered cars are the devil (you know)

It’s easy to look past the difficulties of maintaining and repairing a gas-powered car because they’re familiar. Whether you drive a luxury sedan or a pick-up truck, regular oil changes and sputtering engines have been an unavoidable, universal part of car ownership. But they don’t have to be.

For a deeper dive to compare electric and combustion-engine car maintenance, check out this hour-long webinar: "5 Ways You'll Save on Maintenance with an Electric Car."