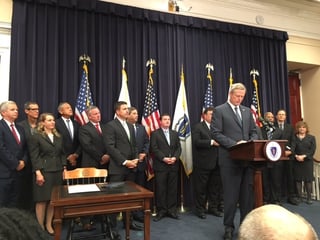 A Note for Rhode Islanders: In December, Rhode Island’s “Climate Change Coordinating Council” issued the Rhode Island Greenhouse Gas Reduction Plan. In many ways, it is similar to the Massachusetts Clean Energy and Climate Plan. But it is important to note that at least in Massachusetts, the CECP is backed up by the Global Warming Solutions Act, which is driving the regulatory process discussed above. It’s hard enough getting government to follow through on binding commitments. For Rhode Island, we need to make greenhouse gas reduction a requirement and not an aspiration. We’ll be talking about this at PP&L’s annual meeting on May 3rd.

In its ruling, the SJC determined that DEP must set annual limits on sources or categories of sources of emissions and that those limits must decline each year. These emission limits are required to ensure at least 25% below 1990 levels by 2020, mandated by the Global Warming Solutions Act (GWSA). EO 569 directed the Executive Office of Energy and Environmental Affairs (EOEEA) to coordinate climate mitigation (and adaptation) efforts across secretariats.

The regulations, which should have been issued in January 2012 and taken effect one year later, are LONG overdue. As co-plaintiffs with Conservation Law Foundation (CLF) in the lawsuit that resulted in the SJC ruling, Mass Energy commends the Baker Administration for taking necessary steps to comply with the law. The proposed regulations alone will not close the GWSA compliance gap that Massachusetts faces, but they are necessary to help get the state closer to meeting its 2020 obligation. These regulations have the potential to put the state on track to meet the long term target of 80% by 2050, especially if improved upon.

MA is staring down a GWSA compliance gap and has only a few short years to catch up by 2020. DEP regulations are supposed to yield reductions in addition to what is expected from existing policies and programs detailed in the Clean Energy and Climate Plan (CECP). Since 2010, implementation of the programs and policies included in the CECP has reduced emissions 19.7% below 1990 levels through 2013. Note that due to a lag in data, 2013 is the most recent year for which Mass DEP has complete GHG emissions data. According to Figure 1 below, taken from the GHG emission inventory, there is an additional 5.3% reduction in emissions that must be achieved by 2020. This amounts to roughly 5 million tons of carbon equivalent between now and 2020. 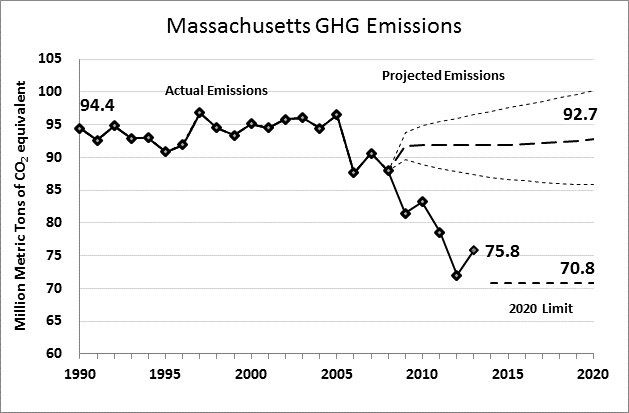 Figure 1: GHG Emissions Reductions from 1990 Baseline through 2013 from Background Document prepared by DEP

Proposed regulations, particularly in the transportation and electric sectors – the two largest contributors to GHGs – do not adequately address the state’s statutory obligation, let alone the climate crisis we face.

Like many of our allies, Mass Energy agrees that the proposed regulations, particularly in the transportation and electric sectors – the two largest contributors to GHGs – do not adequately address the state’s statutory obligation, let alone the climate crisis we face. In our preliminary comments, we urged DEP to go further across the board. We signed on to a joint statement to DEP Commissioner Suuberg criticizing the draft transportation regulations and we limited our more detailed comments to the Clean Energy Standard (CES).

CES: One way to curb electric sector emissions, but no silver bullet.

The CES is one of two electric sector regulations put forth by DEP. It would establish a minimum percentage of electricity supply that must be sourced from designated eligible “clean” resources. The requirement would increase annually. MA has in place a Renewable Portfolio Standard (RPS). This is a requirement that electricity suppliers source a minimum percentage of their supply from qualifying renewable resources like wind, solar, and anaerobic digestion. The RPS currently increases 1% per year. (Mass Energy is leading on advocacy to increase the RPS by 2% per year.)

The CES requirement would be in addition to the RPS and could be met with either RPS-eligible resources or other low or zero-emitting resources that are excluded from the RPS (e.g., hydro). The CES, as drafted, would extend to ALL electricity suppliers, including Municipal Lighting Plants (MLPs). MLPs comprise 13% of state electricity load. 41 communities and towns have MLPs serving all or part of 50 municipalities for electric service.  However, all MLPs are currently exempt from the RPS (and our energy efficiency requirements) per the Green Communities Act. Massachusetts cannot equitably meet its GWSA obligation without muni compliance.

Broadly speaking, Mass Energy generally supports a clean energy standard as a means of curbing electric sector emissions. We wish that it went further and provided utilities with further incentive to reduce emissions through more energy efficiency and storage coupled with renewable energy.

Per EO 569, regulations must be finalized by August 11, 2017. DEP accepted comments until February 24th and have since posted what was received. As noted above, without modification, the current draft will not ensure that the Commonwealth meets the 2020 statewide emissions limit mandated by GWSA. Hopefully some of the suggested improvements will be reflected in the final version. The Conservation Law Foundation recently asserted a willingness to take DEP back to court should the agency finalize “flawed rules.” In such a case, Mass Energy would stand by CLF once again.

If you would like to get involved in this process, visit our Advocacy page or email Eugenia@massenergy.org.