https://www.greenenergyconsumers.org/aggregation15 years ago our non-profit organization stepped into the voluntary green power market, hoping to speed up pace of wind & solar development. A lot has changed for the better since then, but we’ve still got a long way to go. To get there, we need to speed up development of onshore wind power.

For a snapshot of New England Wind Fund updated for 2019, read this blog.

In 2002, Green Energy Consumers (then Mass Energy/People’s Power & Light) convened a group of organizations to design a meaningful way that people could contribute to development of local renewable energy. New England GreenStart was born. To this day, New England GreenStart (now called Green Powered 25%) allows people to choose a mix of wind, solar, anaerobic digester gas, and hydro for their electricity instead of fossil fuels, creating a source of funding for renewable energy projects. It helps members take immediate, practical steps to lessen the impacts of global climate change. 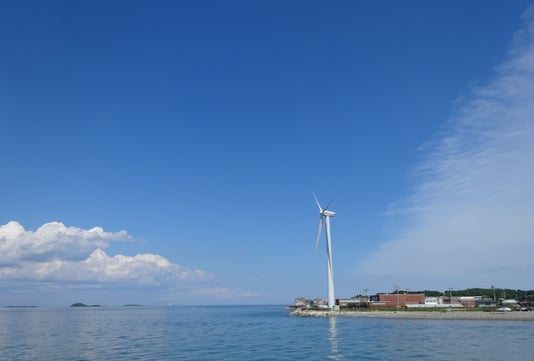 Hull 1, the first community-scale wind turbine in Massachusetts, still going strong in 2016; and still supported by our programs.

Because there was only one community-scale wind project in all of Massachusetts & Rhode Island in 2002 (Hull 1), we launched the New England Wind Fund to crowd-fund small, local wind development. People make charitable contributions of any amount to the Fund, and we use the money over 10 years time to purchase renewable energy certificates (RECs) from new local wind projects. The flexibility to spend the money over time (unlike with Green Powered) allows us financial leverage to sign the long-term funding contracts with wind developers that are crucial to their success.

In the last several years, there has been tremendous growth in the renewable energy industry. Green Energy Consumers, through our members, have helped support 22  wind turbines (updated Nov, 2017 - for a snapshot of New England Wind Fund and the turbines we support updated in 2019, read this blog). See below. While we’ve been busy growing the voluntary market for RECs, the regulatory landscape has changed all around us. Thanks to its robust Global Warming Solutions Act, Green Communities Act, and Renewable Portfolio Standard, MA has 967 MW of installed renewables as of May 2016 (over 100 MW of wind and 850 MW of solar, among other sources). Though much smaller in population, Rhode Island has 54 MW of renewable energy generation, and plans to bulk up, recently extending the Renewable Energy Standard and unveiling the Renewable Energy Growth program.

This regulatory framework has incented the creation of thousands of jobs. Rhode Island is set to become the host of the first offshore wind farm in the country this year, and Massachusetts is following suit with recent legislation encouraging greater investment in offshore wind. The RI Office of Energy Resources Clean Energy Industry Report reports that renewable energy employs nearly 2,000 people in RI. And “Renewable Electricity Generation” establishments support 23,658 jobs in MA, so says the Massachusetts Clean Energy Center’s 2015 report.

How far we have to go

The growth in Massachusetts and Rhode Island is nothing short of impressive, but it’s not enough. In the face of climate change, there is global consensus that we must reduce greenhouse gas emissions to 80% below 1990 levels by 2050, at least.

Though both states have referenced the 80% reduction target in legislation, neither is on track to meet nearer term goals such as reducing emissions 25% by 2020. Both states have made commitments to solar, offshore wind and large hydropower, but a diversity of resources will be necessary to reach our climate change mitigation targets as quickly as possible and “keep the lights on.” We need the often politically ignored power of onshore wind, which is the lowest cost zero-emission source of energy available. 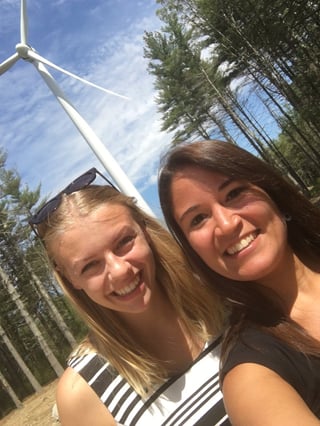 Staff on a visit to the Coventry, RI wind turbines during the later stages of construction.

Our states have spent most of their industrialized history at “the end of the pipeline” for fossil fueled energy: coal, natural gas, and oil are controlled by other states, other countries, other markets and we’re at the mercy of transmission and supply costs. In recent years we’ve seen how our overdependence on “cheap, abundant, American natural gas” has resulted in shortages, skyrocketing costs, and a proposed pipeline tax that utilities want electric ratepayers to pay for. Onshore wind, on the other hand, can be locally controlled and built. And since many communities and developers have the will, somebody needs to provide the way.

So yeah. We need more onshore wind power--and we’ve got the way you can help. 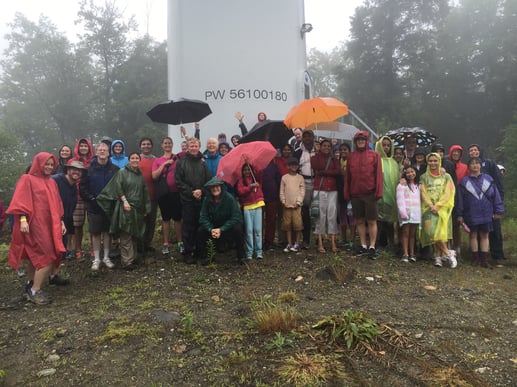 In all these years of buying renewable energy certificates (RECs), we’ve learned that small, local wind projects need long-term commitments of funding in advance of construction, as much as they need the funding itself after construction is completed.

In order to fulfill green electricity demand from our members of Green Powered, we buy RECs for each and every kilowatt hour they use, spending their matching contributions immediately (learn more about making the switch here). However, in order to make the biggest impact for our climate, we need to be able to make long-term commitments to purchase RECs from wind turbines not only now, but in the future. Since we rely on our green electricity members to fund this purchase of RECs, what happens if membership declines?

That's where New England Wind Fund comes in. The funds in New England Wind Fund ensure that we can honor our funding commitments to wind turbines in the future, even if membership in Green Powered declines. By supporting any of these three programs, you’re ensuring that wind power has a present and a future above and beyond what is required by state law. However, it is New England Wind Fund that creates an enormous amount of helpful financial leverage.

Convinced we need more wind yet? Get involved!

We’re excited and proud to invite you to support the New England Wind Fund. In the years to come, we anticipate that membership will grow, and also that more towns and cities will sign green municipal aggregation contracts with us. While these contracts typically last 1 or 2 years, potential developers of new turbines need us to commit to 5 to 10-year contracts. New England Wind Fund contributions give us the flexibility to scale up our support for these projects now.

A $100 contribution to the Fund will support at least three thousand kilowatt hours of wind power, or enough to power the average household for nearly 6 months. We will spend your contribution on local wind power within 10 years. (this section was updated May 22 2019)

We hope we can count on your support! Onward on the path, and at the pace, that climate demands!