Funding for Electric Vehicles stalled at the Massachusetts State House. Call Your Legislators! 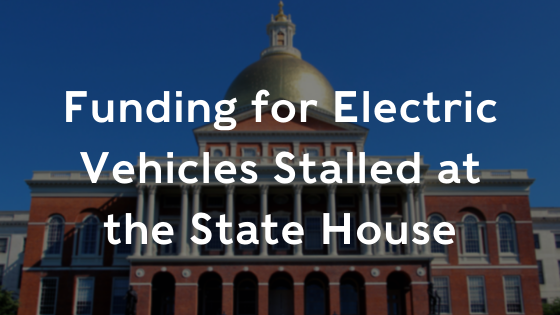 November 20th marked the end of formal session in Year 1 of Massachusetts’ two-year legislative cycle. The remaining weeks of 2019 are considered “informal session,” during which bills may still be considered and moved, but formal activities not completed by last Thursday are largely on hold until the legislature formally reconvenes in the new year. A proposal to replenish consumer rebates for EVs is included in the supplemental budget (H.4132/S.2418) currently stalled at the State House.

Green Energy Consumers Alliance is dedicated to harnessing the power of energy users to speed the transition to a low carbon economy. We do that in a variety of ways, but the majority of our legislative advocacy focuses on reducing greenhouse gas emissions (GHGs) through energy efficiency, electrification of vehicles and buildings, and supporting renewable energy development. Many bills filed this session would impact the Commonwealth’s ability to meet its climate goals through these strategies. Many such bills are still in play, but one matter that needs to be resolved sooner rather than later is replenishment of Massachusetts Offers Rebates for Electric Vehicles (MOR-EV).

MOR-EV is the very popular consumer rebate program for electric vehicles. It is also the only direct incentive offered by the state to spur EV adoption. The program was suspended at the end of September due to lack of resources. We have been working with the administration, legislators, and allies to secure (and subsequently restore) funding since before the program expired.

Earlier in the year, we signed onto a letter to legislators expressing concern that MOR-EV was at risk of being terminated without additional funding. In September, we penned a follow-up letter of support for a provision in Governor Baker’s proposed supplemental budget (H.4067) that would restore funding for two years.

Given that emissions from the transportation sector are the largest contributor GHGs in Massachusetts, it follows that vehicle electrification is a key strategy for reducing sector emissions and thus a critical component of the state’s path to Global Warming Solutions Act (GWSA) compliance. Moreover, Massachusetts is a Zero Emission Vehicle (ZEV) state and as such is committed to registering 300,000 ZEVs by 2025. MOR-EV was helping to nudge the Commonwealth along.

“It would be irresponsible to let this program expire at a time when we must be doing everything we can to accelerate EV adoption and to make EVs more accessible to Massachusetts drivers,” we wrote in support of an imperfect, but necessary legislative proposal that was required immediately to sustain an important and popular program. Seventeen other groups signed on in agreement, including Transportation for Massachusetts, Union of Concerned Scientists, Acadia Center, Conservation Law Foundation, Sierra Club, and Health Care Without Harm.

MOR-EV helps address a major barrier to EV adoption. It has been well-documented that upfront cost is a primary barrier to adoption of electric vehicles. Consumer incentives, including rebates, help to defray the upfront cost of EVs, spurring adoption and encouraging market transformation. In fact, at the time that MOR-EV was running out, approximately 15,000 electric vehicles had been registered in Massachusetts. 14,930 rebates had been reserved or issued since MOR-EV was first introduced in 2014.

Below is a table that illustrates some of the more generous state offerings helping to spur meaningful adoption of Battery Electric Vehicles (BEV) elsewhere in the country.

Language included in the latest draft of the supplemental budget is consistent with what we are seeing elsewhere in the country: it would increase the MA rebate (from $1,500 at the time of program expiration) to at least $2,500 and up to $5,000 for an all-electric vehicle with a retail price of less than $50,000.

What’s the hold up?

Although there is general agreement on the value of MOR-EV and the need to replenish funding, disagreement over other provisions in the respective drafts, specifically a corporate tax exemption, proved to be more contentious. Since both chambers failed to reach agreement overall, no bill was passed before formal session ended on November 20. Thus, a conference committee has been formed and conferees will have to reach consensus and move a final supplemental budget forward. It is our hope that the language pertaining to MOR-EV survives the process and that agreement on the final bill is reached before the end of December.

You can help: Now is a good time to call your legislator.

Contact conferees (Reps. Michlewitz, Garlick, and Smola & Sens. Rodrigues, Friedman, and deMacedo) and your state legislators. Encourage them to work swiftly to resolve the supplemental budget that includes restoration of the MOR-EV. If you already have an EV, mention how much you like your car and how important it is that other people be able to benefit from rebates to increase access to this environment- and public health-protecting technology.

Rhode Island's EV rebate expired on July 20, 2017, and we hear that neither the governor nor legislative leadership have plans to bring it back. However, as we’ll write later, state discussions about how to engage in a regional effort to reduce transportation sector emissions and to reinvest proceeds to support cleaner transportation and transit could create an avenue to revisit how the Ocean State encourages EV adoption.

The fact remains that we need to pick up the pace of vehicle electrification in both Massachusetts and Rhode Island if we are to have an impact on GHG emission reductions, improved public health, and market transformation that ensures climate compliance. Getting there takes investment. Let’s hope policymakers put some policy and money behind their ambitious goals.