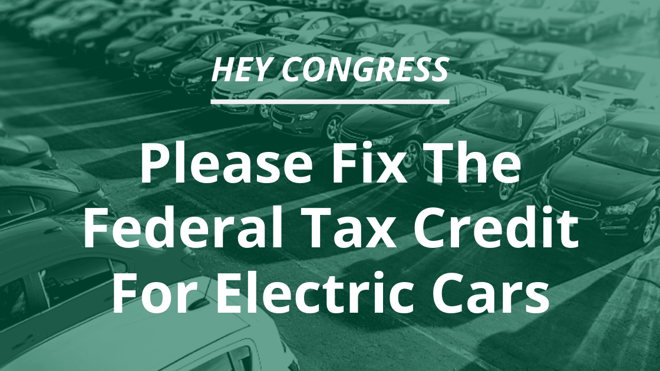 By all accounts, the recession caused by COVID-19 is hammering the auto industry in the United States and worldwide. Many factories are closed and dealerships have laid off most of their employees. Not surprisingly, members of Congress from some states most affected – Michigan, Ohio, and Alabama – are working on ideas to stimulate demand for new cars. Details are scant but as reported in the Washington Post on May 6, it appears to be along the lines of a “Cash for Clunkers” program.

It’s anticipated that Congress will eventually “return” to work, virtually or otherwise, to discuss new rounds of economic stimulus and relief packages. There’s some movement for a green stimulus, but apparently not a lot. It’s disturbing that the Washington Post story failed to mention electric vehicles (EVs) even once. Whether that’s a reporting failure or an indication that EVs are not at the front of mind for legislators now is unknown.

Here are some ideas that do not come close to making for a big Green New Deal. They should increase adoption of EVs, which is something that our economy and environment both desperately need.

The federal government’s main policy for promoting electric cars is the tax credit for purchasing new EVs, originally established in 2008. It provides for a credit of up to $7,500. The actual amount of the credit depends upon the capacity of the car’s electric battery. Most all-electric cars are eligible for the full amount. Plug-in hybrids, which have smaller batteries, are eligible for a lower figure. Furthermore, the credit is non-refundable, which means that if your tax liability in a given year was smaller than the amount that your new car was eligible for, your credit would be capped. You would pay zero in taxes for that year, but you would not receive a check from the government, even if the car was eligible for a credit of up to $7,500.

One of the key provisions of the EV tax credit law is in dire need of change as soon as possible. Perhaps it made sense in 2008, but it doesn’t now. That is – the credit is phased out for each manufacturer in the second quarter following the calendar quarter in which a minimum of 200,000 qualified EVs have been sold by that manufacturer for use in the United States. The intent of that was to encourage several carmakers to gain some traction in the EV market.

So far, only two companies have reached the 200,000 car threshold – Tesla and General Motors. If you’re eyeing a Tesla Model 3 or a Chevy Bolt, no tax credit for you.

Pay attention – Cars made by companies that have invested the most into EVs and have produced popular models are now at a competitive disadvantage to cars made by laggards. In the last year or two, EV adoption in the U.S. has been slow, outside of California – slower than in China and Europe.

Pay closer attention – Tesla and GM both make their EVs here in the United States. They are now at a disadvantage to foreign competitors who might eventually wake up and smell the coffee. We welcome the Hyundais, Kias, Volkswagens, Nissans, and others to the market, but they are not being as aggressive at selling EVs here as they are in China and Europe.

This situation is probably not what Congress had in mind. In our review of what other nations are doing to incentivize EV sales, we can find none that are shooting themselves in the foot like this.

The Tax Credit is Broken, So Let’s Fix It

Fix #1: Make it refundable or allow it to be carried forward.

If someone’s taxable liability in 2020 is $5000 and buy a car qualifying for a $7500, they should receive a check for $2500 from the IRS or carry the credit forward towards their 2021 tax liability. This is especially important now given how incomes are dropping on average as a result of the recession.

At a minimum, this needs to be changed so that Tesla and GM can become eligible again. But in doing so, other carmakers would also have to up their game in order to compete with Tesla and GM.  Put the pressure back on. China is selling EVs in Europe. And European EVs are selling in China. Our market needs a fix.

Perhaps there should be some other type of limits on the tax credit. For example, maybe Congress should place an overall limit of two million cars (or some other number) eligible for the tax credit. But before we go there, let’s note that the Treasury Department estimates that the credit will cost roughly $4 billion from 2018-2028. It’s far less than the subsidies that go to fossil fuel companies. And it’s far less than what businesses save on their taxes when they buy large gasoline-powered vehicles.

Currently, the tax credit applies to an electric car regardless of how much the owner paid for the car or the affluence of the owner. In this respect, it can serve as a subsidy for high-priced cars purchased by people with above average financial means. That made sense at first; it certainly was a selling point for the first 150,000 or so Teslas that were sold in the U.S. And in the long run, if that is what it took to help at least one car company get market traction and actually transform the market with EVs, maybe it was worth it.

But twelve years have passed and great advancements have been made with EV technology and manufacturing processes. EVs have proven themselves to be better than internal combustion engines. So if someone has the means to buy an expensive Tesla Model S, Jaguar I-Pace, Audi E-Tron or the like, the tax credit has a smaller effect on their buying decision than it might on someone contemplating the purchase of a Tesla Model 3, Chevy Bolt, Volkswagen, or Nissan LEAF.

The carmakers are now saying that battery costs have come down enough such that they can make a profit on up-scale EVs, but none of them have been able to make a profit on EVs that would be affordable to the middle-class. The average new car sold in the U.S. sells for $37,000. We need EVs at price points that the middle class can afford and, as soon as possible, that lower-income folks can afford. And our policies should send that signal to the carmakers.  As it happens, Massachusetts, Washington, and other states limit their state rebates to cars costing less than $50,000.  You can now get a Tesla Model 3 in Massachusetts below that qualifies for the state rebate.  Tesla started with high-end models, but has adapted in order to expand their customer base.

Having said all that, even if Congress fails to change the tax credit for the better, we can help you learn about which EV might be best for you. We've made some arrangements with dealers to offer you great cars at a good price!

A generous donor will match up to $10k through September 30th. With your help, we could raise $20,000 for climate and clean energy!