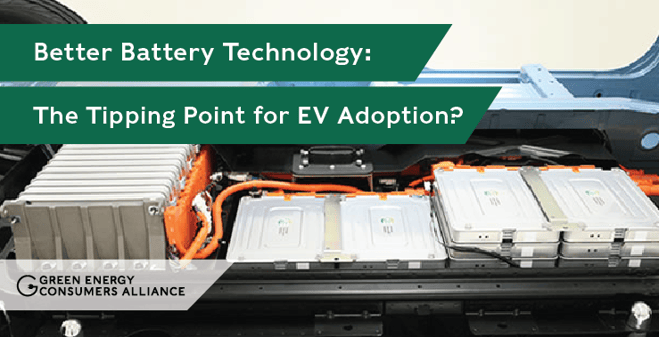 The 21st century brought us faster processing speeds and smaller processors, spurring a glut of electronic devices. Many of these products are battery-powered and portable, like cell phones, laptops, e-readers, and smart watches, all sporting a longer battery life with each new generation of devices. So where do electric cars fit into our increasingly electrified world, and how much does battery technology need to improve so that they become the new norm?

Electricity consumption and battery storage are not intuitive to think about, so it helps to use something familiar as a reference point. Most personal electronics rely on lithium-ion batteries and require a relatively small amount of stored energy to have sufficient battery lives. A fully-charged smartphone with a battery life of 11 hours holds about 0.0055 kilowatt-hours of energy.

As you might expect, propelling a 3,500-pound electric vehicle (EV) for hundreds of miles requires much more stored energy. All-electric vehicles coming to market now have batteries that can hold 60 kilowatt-hours of energy — nearly 10,000 times more storage capacity than a cell phone. Such electric cars can drive around 230 miles on a full charge.

For many consumers, 230 miles of driving range feels lackluster when compared to cars that can drive 300-400 miles on a single tank of gasoline. Range anxiety, or the idea that a vehicle will run out of energy before it can reach a place to charge, is largely a problem of perception, not battery performance. Actual EV owners say again and again that range anxiety dissipates and is mostly a concern for people who don’t own an EV. Once a driver gets used to plugging in, their range anxiety fades. But unlike the personal electronics market, electric cars must compete with a well-established, well-understood industry to change driving norms.

To make this point clear, let’s return to the cellphone analogy. Most cellphone owners are used to either charging at night or charging periodically throughout the day. I rarely let my cell phone drop to 0% before I plug in again.

Electric cars are no different. Plugging into an outlet or charging station means there’s no need to make a detour just for gas.  Yes, it does take more time to fill a battery with power than it takes to fill a tank with gasoline, but plugging in takes just 10 seconds. The average American drives less than 40 miles a day and cars spend 95% of their time parked. Plugging in at home for a few hours can easily meet the needs of most drivers while their cars are in the garage anyway. The problem of range anxiety exists because we’re conditioned to think about refueling cars when they’re empty, when really we should think about charging electric cars like we do smartphones. 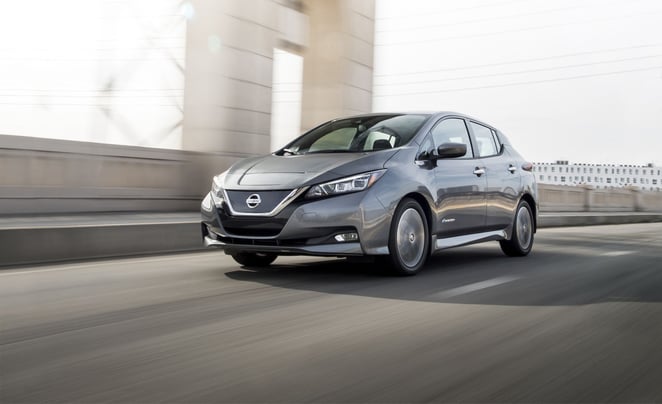 Most Americans could transition to electric cars today with just a minor tweak in their refueling habits, earning back the time and money they now spend pumping gas and performing engine maintenance for their gas-powered cars. However, inertia in the electric car market has proven difficult to overcome; better batteries could be the solution to get people to switch to electric.

How good are batteries now?

To be useful in cars, batteries need to be energy-dense, or have a high storage capacity without taking up a lot of space or weight. Electric car batteries also should perform well in low and high temperatures, be durable and safe, and have a long usable life. And perhaps most importantly, they need to be inexpensive enough to compete with internal combustion engine (ICE) vehicles.

Fortunately, battery costs are falling fast. Not long ago, batteries in an EV cost more than all the car’s other parts combined. Now, battery costs account for about a third of the total sticker price, and should drop to a fifth of the car’s price by 2025. Because an electric car has fewer parts than a gasoline car, by that time, the total upfront cost of an EV is expected to be less than a car with a gas tank and engine.

The evolution of the Nissan LEAF, one of the pioneer electric car models, is a testament to how quickly battery technology has developed. Since 2012, the LEAF’s range has improved by 170% while the base sticker price has increased by just 9%.

Lithium-ion batteries are the most common type of battery used in electric cars and other portable electric devices. They are energy-dense, lightweight, and increasingly inexpensive.

In 2010, when electric cars were first introduced into the mass-market, lithium-ion battery packs cost about $1,000 per kilowatt-hour of storage. Now, they cost less than $200 per kilowatt hour. 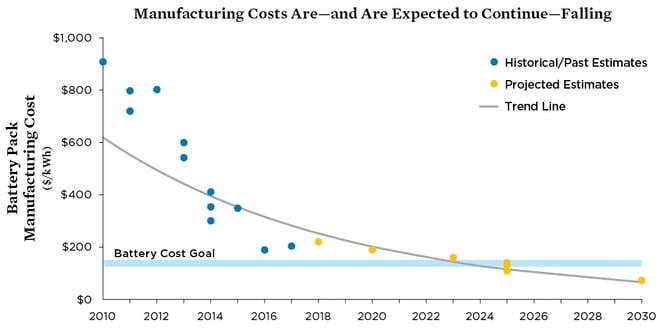 Lithium-ion battery costs are falling. That means EVs will be able to have longer driving ranges at lower costs. Source: Union of Concerned Scientists

Experts estimate that battery costs need to drop down to $100 per kilowatt-hour in order for EVs to be price competitive with combustion-engine vehicles. If current trends in technological innovation continue, we should hit that target by 2022, if not sooner. That means that high costs, one of the biggest barriers to the proliferation of EVs, will quickly be nulled, especially since the cost of maintenance and fuel for EVs is already so much lower than conventional cars.

(EVs save an average of $860 in annual fuel costs. In New England, by our math, annual savings are closer to $402 due to differences in electricity and gasoline prices by state. You can learn more about cost savings for consumers right here.)

One technology to watch for is solid state lithium-ion, in which a solid ceramic, glass, or polymer material replaces the liquid electrolyte of the battery. This replacement would make for thinner, denser batteries with improved driving range and charge time, but the technology will probably take 10 years or more to develop commercially.

That’s a long time to wait, and it’s possible that lithium-ion batteries are just a stepping stone to an even more sophisticated battery chemistry that is still years away. Battery, auto, and chemical manufacturers are promising breakthroughs with entirely different battery chemistries, such as fluoride-ion.

While lithium-ion batteries are best-positioned to dominate the battery industry, electric auto and bus manufacturers are also tinkering with other possibilities. Most notably, Toyota has been known to use nickel-metal-hydride batteries in the Prius and Prius Prime. These batteries aren’t nearly as energy-dense as lithium-ion packs, but they have the advantage of longer usable lifespans and lower production costs. Nickel-metal-hydride batteries are popular in hybrid vehicles because they can withstand cold temperatures better than lithium-ion and they lack a liquid electrolyte, making them less prone to spills and therefore safer and easier to recycle.

For relatively small battery-packs or exceptionally large vehicles, the additional weight and space of nickel-metal-hydride battery packs is a sensible trade-off for better performance and lower costs, though they’re not really suited for a high-range all-electric vehicle. Researchers hope that energy density can improve tenfold in nickel-metal-hydride batteries, but again, it’s unclear as to how long it will actually take to develop.

The takeaway we see is that the current lithium-ion technology is good enough to allow the transportation sector to transition away from gasoline. However, we should not be surprised to see breakthroughs in other technologies that make the transition better, faster, and cheaper. 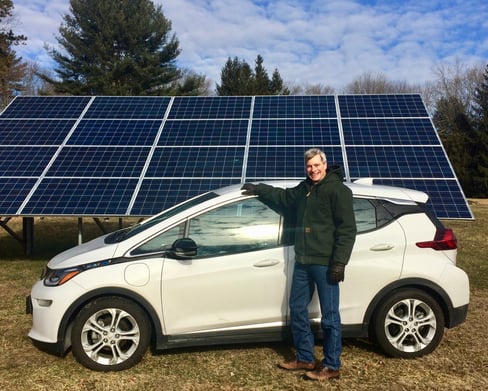 Joel loves his Chevy Bolt. As an EV Ambassador, he talks to people who are considering buying their first EV about his experience driving electric. Spreading awareness and information helps change public perception about electric cars.

The good news is that we don’t have to wait for the perfect battery to make the transition to electric cars. Developing networks of public charging infrastructure are making it easier and more convenient to recharge, so that range anxiety is less prominent. When more people see EVs on the road, know someone who owns an EV, and realize the economic benefits of EVs, then the market can transform quickly to overcome consumer hesitancy.

Education and visibility can make up for where battery technology falls short for now, and incentive programs (like Drive Green) can lower the upfront cost of purchasing an EV while we wait for the cost of lithium-ion batteries to decline.

If you are still unsure whether an EV is right for you today, please take a look at our website and sign up to test drive one or more of the great EVs we have to offer.