Why 2016 Is the Time to Buy an Electric Vehicle

2016 is the time to buy an electric vehicle. Why? Technology has made huge advances, costs have come down, and federal and state policies will help support your purchase. And if we want to meet our greenhouse gas emission goals, we need to electrify our transportation as quick as we can.

First, though, let's run through a quick refresher on what an "electric vehicle" even is.

Your basic conventional car runs on an internal combustion engine: you add a fuel (gasoline, diesel fuel, or ethanol), it ignites and releases energy that is translated into motion. In the process, however, the vehicle releases carbon dioxide, one of the greenhouse gases contributing to climate change. In the United States, the transportation sector is responsible for 27% of our greenhouse gas emissions.

An electric vehicle (EV), in contrast, runs on an electric current. There are three main types of vehicle commonly called "electric", and it's worth knowing the difference:

The key with electric vehicles is that, even with the emissions from electricity generation, switching to an electric vehicle from a gasoline-powered car reduces greenhouse gas emissions (see below). Our New England power grid is greener than gasoline (especially with the help of programs like Massachusetts’ Renewable Energy Portfolio Standard (RPS) and Rhode Island's Renewable Energy Standard (RES)).

Even if you don't green your electricity and just buy whatever your utility provides, running an electric vehicle produces far fewer emissions than driving around town with a conventional vehicle.  The U.S. Dept. of Energy has a web site that allows you to compare the emissions of various types of cars (electric and conventional) depending upon your zip code. (The fuel mix used to generate the electricity you consume varies by zip code.) Here is a graph showing the environmental payoff of EVs in MA & RI according to the data from the Dept. of Energy: 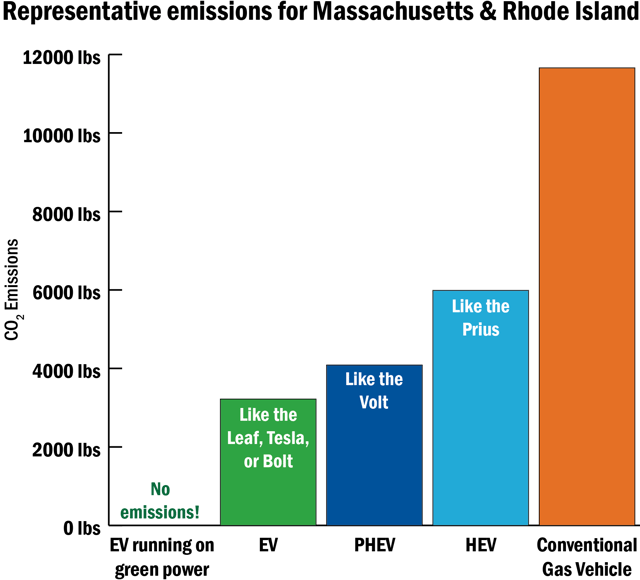 But – if you buy green power from Mass Energy or People’s Power & Light, you can actually drive your car emission-free!

2. EVs are cheaper to operate than conventional vehicles.

When you power your car with electricity, you pay less per mile than with a conventional vehicle (even with New England's relatively high electric rates and today’s lower-than-usual gasoline prices). Not to mention the costs of tune-ups, oil changes, and more that you can forgo with an electric vehicle.

Ben Paulos wrote a good article about the cost to own an EV. When doing the math for yourself, be sure to factor in both the $7,500 federal tax credit and state rebates of up to $2,500 (more on those below); the graph shown here (from Paulos’ article) might not perfectly capture car purchase prices after those rebates.

As Paulos pointed out, it’s easy to find an EV that costs less than the average new car, especially when taking the tax credit and rebates into account.  When our Executive Director was shopping for an EV, he found that the true cost of ownership for a 2015 Volt was better than that of a 2015 Prius plug-in because the Volt was eligible for a larger state rebate and a Volt can be driven many more miles in a year on electricity than a Prius plug-in. In fact, Chevy’s Volt and Spark were both recently awarded Kelley Blue Book’s 2016 5-Year Cost to Own Awards.

3. EV technology keeps getting better and EV prices are going down.

EVs are more efficient and offer longer ranges than ever before. According to the Federal Highway Administration, the average American drives 13,476 miles each year; that amounts to about 35 miles per day. So, charging your EV overnight should be more than enough for most daily driving. And charging stations are popping up more and more in public places and office buildings.

To find out more about what cars are available, we highly recommend www.greenercars.org, www.greencarreports.com, and the U.S. Dept. of Energy’s fueleconomy.org site.

4. Government support will help cover the costs of purchasing an EV.

States also offer incentives for electric vehicle purchases. In Massachusetts, the MOR-EV program offers rebates of up to $2,500 for the purchase of new electric vehicles. In Rhode Island, the recently unveiled DRIVE program does the same. Funding for both state rebates is limited (especially in Rhode Island).

So there's not much time to waste!

Even with all of this information, you may still be asking, "couldn't I get a better car by waiting another year?" To that, the answer is yes. However, we hope you'll consider purchasing an electric vehicle now, in 2016, for several main reasons:

The Big Picture on EVs:

Both Massachusetts and Rhode Island have clean energy and climate plans designed to reduce greenhouse gas emissions 80% by 2050. Both states’ plans rely on dramatically increasing the number of electric vehicles to meet those emissions goals.  And in 2014, both states signed onto an agreement with six other states to get 3.3 million EVs on the road by 2025. Massachusetts' share of that goal is 300,000, but so far it only has 5,000.  Rhode Island’s goal is 43,700, but so far it has less than 1,000.

So obviously we need to accelerate adoption of electric cars. Sometimes to get something of great value, you need to pay more – renewable energy, organic food, etc. But sometimes, as in the case of EVs in 2016, you get a better product for less. If you are already a member of our green power program, you've already taken a huge step by greening your electricity. Purchasing an EV the next time you're considering buying a car is simply the next important step you can take!

Note: At all of our upcoming events, we will have an EV showcase. Come and test drive an electric vehicle, or, if you're already the proud owner of an EV, come show-and-tell! Watch out on our website here for upcoming opportunities.